“Grace: More Than We Deserve, Greater Than We Imagine,” 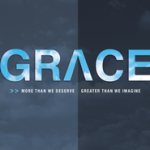 “If you wonder whether God can do something with the mess of your life, then grace is what you need.”

When Zacchaeus’ encountered Jesus, “Grace walked in the front door, and selfishness scampered out the back.  It changed his heart.  Is grace changing yours?”

With his typical flare for turning a phrase and packing a punch into each memorable sentence, Max Lucado makes the heavy theological topic of grace living and real.  Through fresh takes on age-old Bible stories, Lucado further convinces me that grace is the cornerstone of my faith.  It’s what makes Christianity stand out in stark relief to all other religions.

Grace is written in a devotional style. Each chapter is short and simple enough to grasp in one sitting, yet profound enough, you’ll want to read them over again so the truths can sink deep into the way you shape your life.  Lucado wraps each chapter concept with what he does best, his ability to tell a story that drives home the point he wants to make.

For example, I love the story he tells of Heather Sample and Kyle Sheets in Chapter Eight, “Fear Dethroned.”  Kyle, a doctor, was exposed to the AIDS virus on a short term medical mission to Zimbabwe, experienced God’s miraculous care for him.  Lucado’s telling of the story makes me never want to allow my fear to dethrone my trust of God again.

He reminds the reader of the enormity of God’s grace and the responsibility we have to become grace-bearers, to become conduits of what has been so freely given to us.

If you are looking for a special Christmas present for a special someone, I truly recommend Mac Lucado’s book,Grace. It will become a gift that keeps on giving. 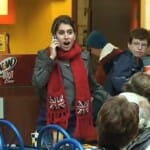 A youtube video of one of those popular flash mobs is circulating on Facebook this season.  The video is of a random group of people singing various Christmas carols, ending with “O Holy Night.” During the final song, two robed figures depicting Mary and Joseph appear in the mall’s main staging area carrying a baby.  By now, most of the crowd is paying rap attention, including the children.  A parent points out the figures to a transfixed older boy who, a few shots later, falls to his knees, his eyes still glued to the Mary and Joseph figure.

I can’t help it.  Every time I watch that video, a lump forms in my throat and tears spring unbidden to my eyes. Even if I cynically stop and wonder if the boy’s kneeling was staged, I still cry. It reminds me powerfully of something that happened fifteen years ago.  Our small church put together a “Victorian Christmas” program complete with the “street singers and a traditional feast with goose and plum pudding.  Several ladies, including me, formed a singing troupe and rented era costumes.  At the climax of the program, a couple with their new baby would reenact the nativity scene.  We planned to have a high school girl with a tremendous voice sing, “What Child Is This?” 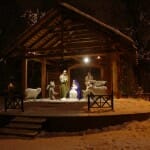 But at the last moment, the girl ditched and the director asked me to fill in.  So there I was, in my ill fitting costume, singing to a baby.  As I sang, I was transfixed into another time frame.

What Child is this who, laid to rest
On Mary’s lap is sleeping?
Whom Angels greet with anthems sweet,
While shepherds watch are keeping?

This, this is Christ the King,
Whom shepherds guard and Angels sing;
Haste, haste, to bring Him laud,
The Babe, the Son of Mary.

My back to the audience, I moved toward the couple, still singing.  Impulsively, clumsily, with my full skirt billowing around me, I “fell to my knees” gesturing toward the baby.  Something beyond myself guided my arm motions, giving the babe “laud” and honor. I rose, only dimly aware that a sheen of tears lay on my cheeks. This, this was Christ the King.  This Child I was singing about was no ordinary baby. It was God in flesh, worthy of every ounce of honor and worship I had to give.

I found out later, that my simple act of kneeling “stole the show.” People, their voices laden with emotion, talked about it for weeks.

So bring Him incense, gold and myrrh,
Come peasant, king to own Him;
The King of kings salvation brings,
Let loving hearts enthrone Him.

Raise, raise a song on high,
The virgin sings her lullaby.
Joy, joy for Christ is born,
The Babe, the Son of Mary.

No, I don’t think that older boy in the flash mob staged that kneeling.  I’ve been there. It was real.  The realization of who that Baby was – and is – compels us to worship.

Life has a way of tossing presents into our path when we least expect them.

This week, I got a bouquet from Heaven.  A bouquet loaded with apple blossoms. 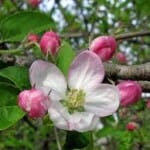 Years ago, when I was first out of graduate school and before I had children of my own, I spent two years teaching kindergarten at a Christian day care center called Apple Blossom Day Care.  All four lead teachers and the supervisor were in our mid-twenties.  Only one of us had a child.  All we had was a lot of head knowledge, a few preconceived ideas, a fistful of dreams and hearts that would grow as large as the heart of a reformed Christmas Grinch as we learned to love the children we served. In spite of the hard work and our varied backgrounds, we became friends.

As each of us left the day care to other avenues of life, we lost touch with each other. This past week, out of the blue, the five of us found each other on Facebook.  We started our own group page and have spent the week catching up on our lives, reminiscing about some of our students and remembering the more poignant and less pleasant moments.

We remembered the time our supervisor scraped the peanut butter off a sandwich to prove to the caterer that he was not putting the two tablespoons of peanut butter on each sandwich as prescribed by state law.  There was the summer of the seventeen year cycle cicadas when it was all we could do to herd the squeamish children outside to play without cramming our own fists into our ears to stifle the screams from the cicadas.  One teacher admitted she didn’t make her class eat the carrot salad served at lunch because she couldn’t stand it herself.  I told the story of how one five year old who, even though he could hardly count to ten, put together our newly delivered Little Tots Play Kitchen for me.   Then there was the little girl that stuck a bean up her nose.  Half way to the emergency room, she sneezed it out. Whew!  She was so calm and nonchalant about the whole thing too.

I look back at those two years with much fondness.  Sure there were frustrations. We chafed under restrictions pushed on us by the state, the owner, the caterer and the expectations of the parents.  We tried to cope with children from dysfunctional families, tried to love them even on the days when we didn’t feel so lovable ourselves.  We admitted to each other that there were so many things we wished we could do over again.  I wish I’d been more patient, more loving, less critical, more organized. I wish I’d seen it more as a ministry and less as a job.

But I like what our former supervisor said to our group last night. “There were some things I wish I’d done differently and some I thought I handled well. But we were young and inexperienced and God’s grace covers a multitude of flubs.”

I’m so thankful God’s grace covers a “multitude of flubs.”

God doesn’t give up on me in the youth of my life experience. Instead, He gives second and third and ninetieth chances to try again in this thing called ministry.  He has such a wonderful way of taking my measly, pitiful efforts, sprinkling them with His grace and glory and building His Kingdom through me and in spite of me.

I hope I can have at least a smidgeon of that same patience with those who come behind me in ministry. When I am able to display God’s grace to the young and inexperienced, I’m spreading the fragrance of God’s grace a little further. If I take a long slow breath, I think it smells like apple blossoms.

As I grow older, I find myself becoming more weary with our all-in-one discount store. 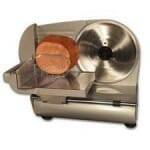 One particular day, i was annoyed by the lack of response at the deli case, then  the apparent cluelessness of the clerk who finally waited on me. She asked me if I wanted my ham sliced at setting #1 or #2.  As a customer unaccustomed to meat slicing machines, I had no idea how that translated into the thickness of a piece of ham.  The store was out of diet cola, eggs were too expensive, and I had two near collisions with other customers.

By the time my husband found me, I was frazzled to the point of distraction.  But I’ve made it my policy to show interest in the cashiers.  It’s become so much a habit that before I can stop myself, I ask with all sincerity, “How are YOU?”

If I really wasn’t interested in knowing how someone was that day, I picked the wrong lane.  My cashier of the hour was just waiting for that question.  She told me how tired she was, how she had work six days in a row and how being busy only made the moments drag more.  I wish I hadn’t asked.  What would her supervisor think of her comments to a customer about her work schedule?

A reality check hit my weary brain.  Because I believe in displaying grace, I had made the choice to look beyond the idiosyncrasies in order to value the person.  While it may not have been professional for her to unload on me, I was operating under the code of grace, not the code of law.  I was listening and sympathizing because I chose to put my rights as a customer aside so I could care about her needs as a human being.

Complaints and criticism hold others’ feet to the fires of our brand of law.  Grace moves beyond our expectations and our own complaints to feel compassion for the other person.