Broccoli Salad nourishes the soul as well as the stomach. 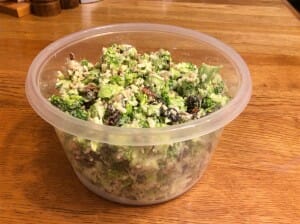 When you think of church potlucks, what food comes to mind? Pies, cobblers, cheesy potatoes . . . “Our church has the best cooks.” I’ve heard that said at almost every congregation I’ve been a part of. Oh yeah! JoAnne’s lemon pie. Inie’s Texas sheet cake. Vanita’s punch bowl cake. Rosie’s chicken and noodles. Mary Lou’s cinnamon rolls. Oh I could go on and on.

Yet as my husband has struggled with diabetes and I’ve become aware of the food related health needs of friends, I’ve become more sensitive to the fact that church potlucks are a huge temptation for someone who has to watch what they eat. Church people don’t help much because there is the subtle and sometimes not so subtle pressure to attend. Yes, people can make their own choices but it is not an easy thing to do, especially when the pot luck dinner has an unbalanced amount of carbohydrate laden dishes.

We need to be a lot more compassionate and merciful at church potlucks. We need to make it possible for people to attend, not prohibitive. The over-arching principle of Paul’s instructions about eating food offered to idols applies here. What I choose to eat or serve does have an impact on other people. If my eating causes someone to sin or pressures them to succumb to something that is harmful to them, it’s my responsibility to lay aside my own eating preferences so I can help my brother or sister overcome the temptation. Let’s make pot luck dinners easier with more healthy and nutritious choices. Yes, there’s still the yummy desert table but at least we can show God’s grace by providing options. Besides, low carb, low fat dishes can be yummy too!

That’s why I love this recipe for broccoli salad. It does have sugar in it but I either scant the sugar or use Splenda. (Be careful on using artificial sugars at church pot lucks. Some people are allergic to artificial sweeteners and you can’t always tell that a dish contains them. Also, sugar is not always the issue for the diabetic; it’s the overall calories and carbohydrates that impact their blood glucose. They need protein rich dishes and nutrient rich fruits and veggies.) You can also cut more calories by scanting the amount of bacon or cheese.

Some of my other favorite health conscious dishes are deviled eggs, BBQ chicken, 7-layer salad, or cut up cantaloupe. Another day, I’ll share with you my recipe for Italian Pasta salad.

I made broccoli salad for our church’s wiener roast last night. By the end of the meal, it was gone! No leftovers. Too bad. I’ll just have to make more for Jack and me.

In a large bowl, mix broccoli, bacon, sunflower seeds, raisins & Cheddar cheese. In a small bowl, combine salad dressing, sour cream or yogurt, sugar, and Parmesan cheese. Drizzle dressing over top; toss lightly. You may need to adjust the amount of dressing according to how much broccoli you have.

Adult daughters are so much fun. 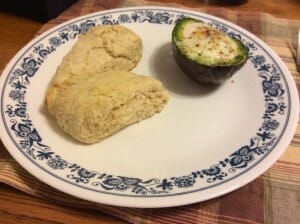 When my daughters come home for a visit, all schedules get canceled. We play card games, talk about craft and knitting projects, do household chores where an extra pair of hands is always helpful, go shopping, eat at a “girlie” restaurant, talk and talk and talk and talk to my husband’s great amusement (after ten minutes, he retreats to his man-cave), and share new recipes.

My army captain optometry doctor daughter came home this weekend for Labor Day. For breakfast, she fixed me this recipe for baked avocado and eggs. The scones were the perfect accompaniment because they cook at the same temperature. We added a touch of chili powder on top of the eggs and agreed either a touch of cumin or a sprinkle of cheese next time would be a nice added addition as well. Dr. Cpt. Katherine, whom the Army insists stay in shape physically, says the avocado and eggs is the perfect breakfast blend of nutritious carbs and protein to get you going in the morning. Mom, who took Home Economics in college in the Dark Ages when it was called Home Economics, agrees. I wondered if I would like a cooked avocado, but these really turned out quite delicious. Eggs and avocados complement each other quite nicely.

Split the avocado in half. Scoop out just a little bit to enlarge the cavity. Place each half in a custard cup.

Crack an egg in the avocado, being careful to not let the white run over the side. (You can scoop out some of the white and combine it with the scooped out avocado in another custard cup.) Garnish with salt, pepper, chili powder, cumin and cheese if desired.

Bake at 425 degrees for 20 minutes. You can bake the extra avocado and egg white if you wish, taking it out after ten minutes. Or put a few drops of lemon juice in the avocado, cover and save for a batch of guacamole.

Cornbread is another one of those foods that wraps around our hearts and speaks of home.

Are you like me? Do you like to crumble your cornbread into your beans? Mmm. And who needs cornbread to go with something. Just get out the honey jar and enjoy the mess and the crumble. Hey, and let’s face it. Jiffy really does a pretty good job of imitating the homemade. It might be bitterly cold outside but just the thought of cornbread and fill in the blank is enough to make me feel warm on the inside.

When Susan Craft told me her story “His Eye Is On the Sparrah” mentions vegetable soup and cornbread, my mouth immediately started to water. Susan told me how her mom, upon whom the story is based, once baked cornbread and forgot a critical ingredient, making it inedible. Thinking she’d feed it to the birds, she took it outside. It was so hard she couldn’t break it into pieces and even slammed it against a tree. Susan remembers she and her siblings watched from their living room window and laughed so hard their stomachs hurt. 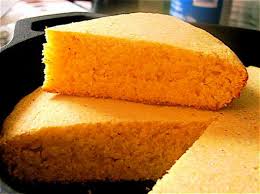 Anyone who cooks has had to learn to extend lots of grace to themselves. Cooking is as much an art form as it is a science. Sometimes the cook’s concentration just isn’t there and we get sloppy with measuring or so distracted we forget a key ingredient. Sometimes, as I try to explain to my husband, it’s just one of those days and there’s no good explanation for why the recipe didn’t turn out. Either that or I’m too tired to try to figure it out and tomorrow is another day. Besides, it’s just one meal among thousand that we will cook, so eat, enjoy and forget.

Some of my days are like Susan’s mom’s cornbread. They just don’t turn out. Days I’d love to feed to the birds so no one remembers. That’s why I’m glad God reminds us that His mercies are new every morning (Lamentations 3:22-24). Each new day is a chance to start over again, to make new cornbread, to try again on a relationship, to work once more at loving someone as Jesus loves them.

Mix ingredients. Place ½ tbsp. Crisco in 9×9 baking pan in 400°oven. When Crisco is melted, pour ingredients into hot pan and bake 20 minutes or until golden brown.

Susan’s selection, “His Eye Is On The Sparrah” tells the story of how a widow’s wooden cane saves the day for a child portraying a shepherd in his church Christmas play. We’re excited her story will join the others in the soon-to-be released anthology, Christmas Treasures: A Collectin of Short Stories.

If you like historical fiction, check out Susan’s blog, Historical Fiction, A Light In Time, at https://historicalfictionalightintime.blogspot.com 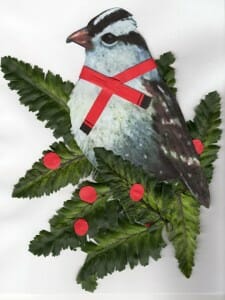 Susan F. Craft’s Revolutionary War romantic suspense, The Chamomile, won the Southern Independent Booksellers Alliance Okra Pick. Susan recently retired after a 45-year career as a communications director, editor, and proofreader. Susan wrote A Writer’s Guide to Horses, for the Long Riders’ Guild Academic Foundation, www.lrgaf.org. She married her high school sweetheart, and they have two adult children, one granddaughter, and a granddog. An admitted history nerd, she enjoys painting, singing, listening to music, and sitting on her porch watching the rabbits eat her daylilies. She has two post-Revolutionary War novels being released in 2015 by Lighthouse Publishing of the Carolinas, Laurel, on January 12, and Cassia on September 14. She is represented by Linda S. Glaz, Hartline Literary Agency.

Be sure to look for Susan’s story in the Christmas Anthology, Christmas Treasures: A Collection of Short Stories. Now available in print or on Kindle.

Vegetable soup and cornbread for supper, anyone?