What I Saw Today

Every day is a new day of discovery! God’s world, both physical and spiritual, is filled with wonder. Come explore God’s world with me as I see it for the first time.

Any woman who gets the call that she needs a retake on her mammogram finds the news unsettling. To get that call in the midst of preparation for surgery for another medical issue–well, that’s where I was this past week.

I’m a private person. I squirm when people talk about mammograms and breast cancer in public. So if you’re like me or if there are any guys in the room, don’t tune me out. This isn’t a story about breast cancer. It’s about the sustaining grace of Christ.

As I’ve shared before, I have multiple eye issues stemming from a genetic defect and side effects from childhood surgery. I’m at high risk for a couple of other eye diseases. My vision is so poor, I’ve wondered if I would be able to identify a new problem for what it was if it ever happened. Last year, I told my ophthalmologist that my vision seemed different. Images were blurry and would “fade out” on me. She thought it was dry eyes but referred me to a retina specialist to get a baseline evaluation. Dr. Reddy discovered I had a small tear in my retina but “there’s nothing we can do about it” since the tear looked like it had been there for some time. Come back in three months, he told me.

I’d always heard a detached retina was an emergency situation. Was everything really ok? Would I notice if the tear got bigger? Was this the beginning of the end of the limited functional vision I’ve enjoyed all my life. I determined to be thankful for the vision God has allowed me to have for 55 years and for all I’ve been able to do, in some respects, more than many sighted people. Every morning after that appointment, I woke up thanking God for allowing me another day of sight and another day of full-to-the-brim activity.

My vision continued to deteriorate. People’s images blurred out on me. Working at the computer produced fatigue and eye strain in less time than it took to type one page of a rough draft. Tasks that I’ve learned to compensate for like meal prep, song leading at church, and walks around my neighborhood now felt like I was swimming upstream against a tide of molasses. I knew something was wrong.

The weeks surrounding my next eye exam were filled with other routine appointments: my yearly mammogram, a podiatrist appointment, a follow-up with my ENT doctor, and a check-up for my dog at the vet clinic. Three days before seeing Dr. Reddy, I went to my mammogram with a group of girlfriends and we grabbed the chance to go out to lunch together. It was a fun day.

Three days later, the retina specialist confirmed my suspicions. The tear had grown bigger. The next step was surgery. It was time to be blunt. “With all my other eye issues, will that be a problem for you?” He was equally blunt. “I can’t make any promises. Your vision might be better. It might stay the same. It might be worse. But I will do the best I can for you.” It was a sober moment.

He scheduled me for surgery in two weeks. “Clear everything from your calendar for at least one week,” his tech told me. I would spend that week face down, doing nothing.

The last few days have been a flurry of activity as I made preps for my upcoming surgery. As my husband and I took off for yet another appointment, I stopped to get the mail. There was a letter from the hospital about my mammogram.

“Aren’t you going to read it?” Jack asked.

“The hospital said they would call if there was a problem; otherwise I would get a letter telling me everything was all right.”

I did and there was the news I didn’t want to hear. I needed another check. While we did our errands, we stopped at my doctor’s office. Because of my impending retina surgery, they were able to expedite getting me shoe-horned in the next day. I would have new images taken. The x-rays would be read while I waited. If they came out positive, I would need to stay for a sonogram. That was the plan.

I didn’t think too much about the possibility of positive results. To me, it was nothing more than a hassle in an already busy week. I didn’t need this on top of everything else I had to accomplish.

After taking the films, the x-ray technician put me in a private room to wait for the results, promising to check on me once in a while. I sat in the easy chair and it hit me what I was waiting for. I thought about the women who had sat in that same chair who did get results they didn’t want to hear. While I truly didn’t believe that I had breast cancer, I had to be aware that the possibility existed and I told myself I had to be ready for the next step.

Breast cancer is scary enough by itself. How would I cope with two diagnoses? Which was worse—the thought of dying from cancer or losing my vision? How would I cope if, worst case scenario, I had to go through both cancer treatment and eye surgery?

I opened my IPAD to check Facebook. My profile page was flooded with well wishes, suggestions for recovery, and promises of prayer for my upcoming retina surgery. Someone had posted an announcement of a special prayer meeting for me and my surgery for the following Tuesday evening. My blog about Mother’s Day that I had posted that morning was getting an unusual number of hits. The affirmation of my ministry and encouragement and love from so many wonderful friends couldn’t have come at a better time. Or ironic, I thought, as I looked down my front at my dopey little hospital vest.

I opened Facebook Messenger. A message waited from my husband. Call me, it read.

Jack told me he had received a phone call from a minister whom I had interviewed for a recent magazine article. The minister went on and on for ten minutes, praising the article and telling how their church had ordered extra copies of the magazine three times.

I put down the phone and stared into the quiet room. I am not done with you yet, the thought cut into my busy brain. People were reading and reacting to my writing. My Bible study ladies, those I had led for several years, were the ones organizing the prayer meeting. Many women would have felt so alone in that little room. To me, the space suddenly felt claustrophobic, crowded with dozens, even hundreds of people who were being influenced by my work and who were in turn encouraging me and lifting my needs to the Father. The love and compassion I felt was overwhelming.

Yes, honey, that you are. Definitely touched. She wouldn’t understand. But I did, and it was worth every bit of spending ten minutes in a small room, wondering about my future.

Trouble comes in threes, we often hear said, and sometimes in sevens. When it comes to stress filled, anxiety producing moments, our brains tend to compartmentalize, rationalizing we can handle only one crisis at a time. No more, Lord, no more. This is my limit. Do you ever catch yourself saying that?

You and I may not be big enough or strong enough to carry more than one life crisis at a time. Our strength has its limits. Not God. His strength is unlimited, His endurance infinite. He can juggle countless balls in the air. His ears will never grow tired of our cries for His help. In the scheme of things, all those issues that loom at a 10x magnification in our nearsightedness are pin prick sized dots on the fabric of eternity.

Even if the results of the second mammogram were positive, even if my eyesight worsened, it was all right. God is not done with me yet. He will still speak through me and use my life as a megaphone of His sustaining grace. No matter what happened, we—my Lord and I—would deal with it and it would be all right. 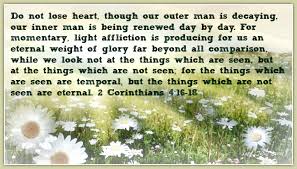 and momentary troubles are achieving for us an eternal glory that far outweighs them all.”

These events were one-time rocks in my life-journey, blips on the radar. God’s redemptive use of the blips and rocks of our lives promise to leave a lasting impact on this world and the next. God knew what was happening to me and He had it all under control.

I do ask for your prayers. I ask you to pray for my husband. Keeping me on my tummy for a week and keeping me from doing anything will take a lot of persistence, grace, and patience. Jack does not have an easy job before him! Pray most of all that God will be glorified, that my surgery will turn out in such a way that the doctor and others have no other recourse than to say, “This has to be of God.” Pray that the surgery will save my functional vision.

The results of my mammogram? It was normal. I’m relieved. But you know what? Even if it wasn’t normal, we would have made it through. It would have been all right. No matter what happens, I am His and He is mine.

If you are curious, here is a great information sheet about retina detachment.