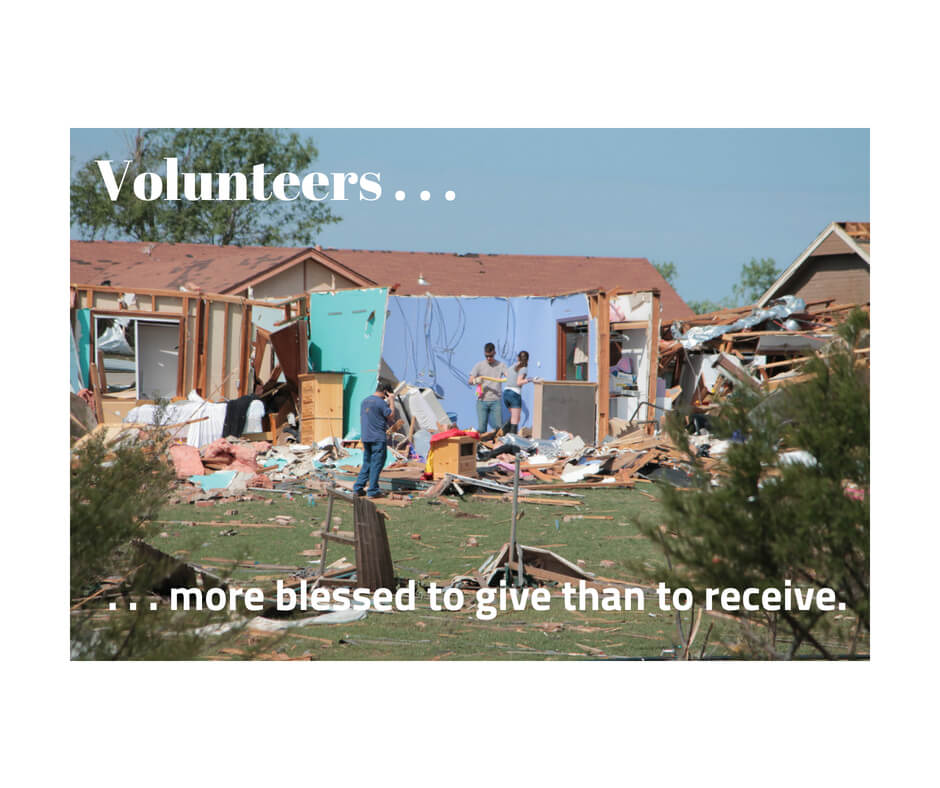 What would the world do without volunteers?

Two tragedies took center stage in the news cycle over this past weekend. In Indonesia, a 6.9 on the Richter scale earthquake rocked the island of Lombok, leaving at least 347 dead, 1,447 injured, and 165,000 displaced. 80% of all buildings on Lombok were destroyed, according to CNN. The state of California now boasts seventeen large fires, one of which is the largest in state history and covers almost 300,000 acres. According to Forbes, over 14,000 firefighters are battling the blazes and the National Guard has sent in over 2,300 people to help contain the fire.

Who is helping the survivors?

I found an interesting omission in these news story. They made no mention of anyone stepping up to help with humanitarian efforts. No, I don’t think the journalists made a mistake. It wasn’t that no one showed up to help. Volunteers are so much a part of the warp and woof of humanitarian aid that their presence was probably, simply, overlooked. We assume the Red Cross, faith-based organizations, and untold numbers of individuals who just want to help will show up.

The facts about the fires and earthquake are sobering, but the statistics could be so much worse. The numbers are what they are because countless people stop their routines to help in the relief, rescue, and recovery efforts. This battery of unnamed workers won’t get paid for what they do, and the value of their donations of time and resources isn’t calculated into government disaster relief budgets. They are simply called volunteers and no disaster cleanup could get along without them.

The Learner’s Dictionary describes volunteers  as people who do work without getting paid to do it. Some volunteers offer to help organized efforts; others lay aside their time and just do it – whether it’s pulling a neighbor out of a pile of rubble, lending a hand to homeowners needing to evacuate their home in the path of a forest fire, or rescuing a dog from a flood bloated river.

They expect no recompense or applause. They walk away, satisfied that they were there to help and comforted that they could comfort.

What if they didn’t show up?

The lingering impact from disasters would be so much worse without volunteers.

I don’t know how many of the 14,000 firefighters in California are part of volunteer fire rescue teams. However, if every one of those men and women were paid the salary they deserve for the work they are doing, California coffers would soon empty, making the state more bankrupt than it already is. That number of 14,000 just represents firefighters. It doesn’t include support personnel: those who bring in water for the parched workers, prepare meals, work with the Red Cross to open shelters for displaced families, or assist with evacuation efforts. Without the volunteers, the fires could be a lot more widespread and disastrous than they already are. Communities could not return to their former beauty and function. Those sifting through the rubble of their former lives would lose hope.

Volunteers help in the everyday as well.

Think of what community life would be like without Sunday School teachers, volunteer fire departments, Girl Scout leaders, and food pantry helpers. Then there are those who babysit while a mom undergoes cancer treatments, drive an elderly person to church, take a meal to someone recovering from surgery, or sweep the snow off a neighbor’s walk. All jobs that could and deserve to garner an income. But those sweet volunteers would never accept it. After all, they aren’t doing it for the money.

If we didn’t have day-to-day volunteers:

The world would be a darker, sadder, and broken place without them.

If there’s nothing in it for them, why do they do it?

There are probably as many reasons folks volunteer as the number of volunteers themselves.

For some, the reason is obvious and simple – others need help. The bigger the need, the bigger the heart, the greater the sacrifice, and the more satisfaction the giver receives.

As Jesus said, it really is more blessed to give than to receive.

In a world that fusses over minimum wages and salary package perks, let’s not forget the people who give without receiving, who truly do discover Jesus’ words to be true.

Volunteers discover the truth and beauty of Jesus’ words – it is more blessed to give than to receive.

So, as you continue to hear news reports about the Indonesia earthquake or California fires, give a moment of your time to thank God for the volunteers who rush to the scene to stopgap the devastation, hold the hand of the dying, comfort the living, and restore the community to what it was. Say a prayer that God will keep them safe as they sacrifice their time, skills, resources, health, and possibly their lives. Use that moment of prayer to look around your community, church, school, or health services and ask yourself how you can give without receiving. When you step forward, you will receive – not in money, but in the satisfaction that you are reflecting the love and mercy of Jesus.

You become a microcosm of God’s grace – and that’s the best payment of all.

Who are the volunteers in your corner of the world? Send them a thank you note for their efforts.

Who needs your help today? Get involved!