Yes, I know. Easter was yesterday, the day before I posted this blog. But hey, Easter can be like the way my family celebrates birthdays. We stretch out the festivities for over a week, or whatever works for most of us.

So, if you’re looking for a new shelter in place cooking project or know some neighbors or shut-ins that need to see a smile and enjoy the scent of homemade bread, this recipe for hot cross buns can be a fun, festive way to keep sharing the meaning of Easter.

END_OF_DOCUMENT_TOKEN_TO_BE_REPLACED

One night, Viorel and his wife were watching a news program in Romania that told how several elderly homeless people died from the cold in a nearby city. Viorel could have said, “Oh that’s so sad.” He could have even prayed for the elderly people still left under bridges and in doorways.

But Viorel did more than that. He and his wife traveled to the city and loaded six elderly homeless people in their car to bring home with them. Today, after several additions to his home that now houses about 63 formerly homeless older folks, and Viorel partners with an American mission group called Elder Orphan Care under the auspices of Remember The Children.My good friend, Kim Jackson, acts as a liaison to Viorel’s ministry, seeking resources to provide for the elderly and telling the story to American church and civic groups. 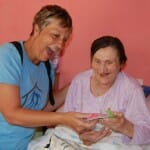 Yes, Viorel’s home is crowded. The home would never pass an American health department inspection team. There is only two indoor toilets and one washing machine for all 63 residents. But, as Viorel says, “We’re not trying to provide a five-star resort. We’re trying to meet basic needs.” Each person has a clean bed and their own space Residents are provided “walker” baskets, little cloth bags that hold necessities. It’s not much, but, as Viorel likes to say, “It’s better than the streets.

The story of how God brought Kim to work with Viorel is amazing in itself.  You can learn more about  Kim Jackson’s ministry here.  Kim is quick to give all glroy to God.  She has experienced first hand what God can do with a life made available to His work.  As Kim likes to say,, “God is writing story after story that prove the words of Ephesians 3:20,21 are true.