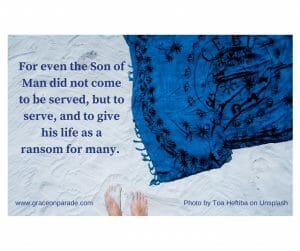 This is the eighth of nine installments of a study about spiritual practices based on the book, Celebration of Discipline by Richard Foster. So far, we’ve discussed:

Let’s look at the Word

Richard Foster says that submission to God comes before service. We must put ourselves aside to serve God and others.

Time to get practical

It’s easy to allow our service to be outward displays. It’s also easy to “do what we’ve always done” and become comfortable with our status quo. If we work in the church nursery, serve on the benevolence committee, and invite the preacher and his energetic children over to dinner once a year, we think we’re doing good!

Stretch yourself this week. Here’s some faith challenges to improve your serve:

How did you do? How were you blessed? You may not see any results or “feel” anything. Know that God sees what you do and He is saying, “Well done, good and faithful servant.”

Does it feel uncomfortable? Clumsy? People criticized your motives? Don’t grow weary of doing good. After all, just like any other spiritual discipline, active service takes practice.

Next time: The practice of Worship 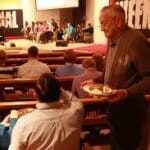 Then he took off the lids from the communion trays and proceeded to serve his flock, walking between the tables, holding the trays for each person. Usually, one of the other men volunteered to help pass trays.  On that day, no one came forward to help even though the minister struggled to get the trays passed.

The classroom was divided into three rows.  Two women, myself and another woman, sat on a pew along the back wall. Since there wasn’t enough room to walk between the second and third tables, the minister stood at one end and passed first the tray of bread, then the tray of juice, allowing the believers to serve themselves then pass to the next person.

As the first tray reached the end of the line, the woman beside me stood up, took the plate of bread, held it while she and I took the bread together, handed the tray to the minister, then repeated the action with the tray of juice.

Now, I come from a background where only the men serve Communion.  I don’t intend for this to be a discussion of whether women should serve Communion.  Frankly, I doubt that theological controversy was even on the mind of my friend.  In fact, that’s what makes this story so special.

This woman saw a need and rose to meet it, simple as that. She was willing to step beyond the confines of gender roles and follow Christ’s commandment and example to serve.  She portrayed her own humility by sharing the moment with me. She was listening to the Scripture about service.

We have a saying in our house.  Grace is messy.  Grace makes you think.  Grace transcends the rules and follows the higher law of love. Grace relaxes about the should’s and ought’s and challenges us to do what needs to be done, even if it means stepping out of the box labeled normal.  Grace is about attitude – lowering yourself to serve even though you ought to be able to sit at the table and be served.