Time for another recipe for ministry!

I’ve found a great recipe for a bread to make for a church dinner. Angel biscuits!

Several times, as I’m cooking for a group of people, I’ve thought that biscuits would be a nice accompaniment. But biscuits are something you make last minute and when you’re cooking for company, a church dinner, or a group of more than six people, who has time to do anything last minute? Plus, at least for me, biscuits are a little hard to double the recipe and make for a group larger than six people. Then I found this recipe for Angel biscuits.

The beauty of this recipe is that since it takes yeast, it’s made ahead, allowed to rise for one to one and a half, and then baked right before you need them. It also makes about 24 biscuits and is a lot easier to mix together than that much traditional biscuit dough. I thought they would taste more like traditional yeast raised rolls but they really do taste much more like biscuits.

The recipe says you can also refrigerate this dough up to three days. That means, you could take a little bit of dough out at a time and make just a few biscuits if you like.

Full disclosure: my recipe is adapted from a 1986 paperback edition of a Betty Crocker cookbook.

Now to find my jar of honey. Winnie-the Pooh, where did you put it? 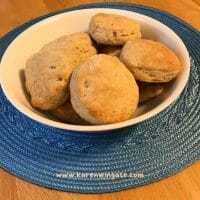 Are these biscuits or dinner rolls? Both! And they make a lot, perfect for a large crowd gathering.
Print Recipe
Prep Time:45 mins
Cook Time:14 mins
Rising time:1 hr

You can place the dough in a lightly greased mixing bowl, cover with plastic wrap and refrigerate up to 3 days.
Course: Side Dish

Previous Post: « 4 Ways to See God: Seeing God Like You’ve Never Seen Him Before
Next Post: MAMA STRONG: 4 Ways To Find Strength So You Can Make It Through »