Hungarian Goulash is one of my favorite specialty entrees

We all like certain dishes for personal reasons. Yes, our tastebuds often determine what we like. But let’s admit it. Good or bad memories flavor our opinions. And I’ve got wonderful memories surrounding the recipe I’m sharing with you today.

Back in 2008 and then eighteen months later in 2009, I served on a short-term mission trip to a Bible training center in Austria for eastern European and central Asian church leaders. My job was to work with about eight other women preparing meals in the kitchen. We made a variety of American and European dishes, and it was there I was introduced to Hungarian Goulash.

I was introduced to many other things, not necessarily food related. I learned the art of taking on a servant attitude as I learned to lay aside my American affluence to serve these men and women who had risked much to come. One student could not even bring a required paper for fear border guards would discover his purpose for coming and arrest him.

One story particularly struck me of how much we take for granted in America. One of our workers spent the week teaching a class in a neighboring country. He caught a cold and his wife, who worked in the housekeeping department that week told how he was miserable because, “there is no Kleenex in Moldova.”

Goulash, I learned when I got home, is one of those adaptable dishes that you make with what you have on hand. It’s like Chop Suey for Asian Americans and Brunswick Stew for those in the South. Yet Hungarian Goulash is quite different from American Goulash. It’s made with stew meat, not hamburger, usually does not have tomatoes in in it, and takes LOTS of paprika.

I’d suggest you get the best quality paprika you can find. Better yet, find someone going to Eastern Europe or get chummy with a global worker and have them bring you back some paprika. Did you know there are varieties of paprika? In the recipe below, I like to use mostly sweet paprika, but I will substitute ½ teaspoon of hot paprika to give the stew an extra bounce.

Hungarian Goulash is usually just a meat dish in a rich beef broth. Variations of the recipe, however, show I’m not the only frugal cook in the world. You can stretch your dish by adding a combination of potatoes, carrots, and egg noodles. A Yugoslavian variation adds canned tomatoes or tomato sauce. A Transylvanian variation, according to my cookbook, adds sauerkraut.

With two pounds of meat, this recipe makes a lot—a great dish to serve to company. You’ll want to allow 1 1/2 -2 hours for the stew to simmer so you’ll need to plan ahead. Can it be made in a slow cooker or Instant Pot? I’m sure it can, but I haven’t tried experimenting. I don’t think I want to mess with success! 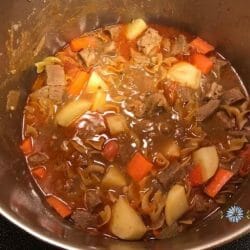