There will be no Sea in Heaven.

That’s what Revelation 21:1 says. Does that surprise you?

When I finished guiding a ladies’ Bible study through the book of Revelation, I wiped my forehead and said, “Whew! We made it!” Teaching Revelation was the most challenging – and rewarding – study I’ve ever conducted. Like many Christians leaders, I’ve been afraid of the book, afraid to get involved in the controversies.

I’ve learned so much about worship, God’s intentions for His followers, and God’s response to the evil that is strangling our culture. So many little details surprised me, enough that I needed to ask over and over again, “Why is that so?” One was the comment in Revelation 21 that there will be no sea in the new Heaven.

But the sea is a nice place. Warm beaches, surf boards, crashing waves, and boating. What could be more picturesque and pleasant than watching the waves?

A picture is worth a thousand words and the Apostle John used powerful imagery to prove his points about God’s plan for the ages. The images attempt to describe the indescribable and suggest greater truths. This is especially true in John’s expression that there will be no more sea.

Our Bible study group discovered three reasons why John mentions that there will be no sea in Heaven.

According to Matt Proctor, in his book Victorious (College Press, 2013), to a first century Greek, the sea was a place of chaos and evil. Put yourself in some Greek sandals. To your way of thinking, the sea would be uncrossable. Loved ones died in shipwrecks. Enemies arrived in foreign looking vessels. No sonar systems plunged the depths and analyzed strange creatures that lived below the surface. The sea was a place of fear and dread.

No sea means no fear. No more danger, death, or destruction. No more enemies or uncertainty. Wow. Can you imagine life without fear or cause to fear?

A good Bible study method is to compare one verse with other verses. Earlier in Revelation, John says there was a sea before the throne of God:

“Also in front of the throne there was what looked like a sea of glass, clear as crystal.” – Revelation 4:6

This scene is in the present Heaven, the one that exists right now. The New Heaven in Revelation 21 will be established at the very end of time after Jesus eradicates all evil from the earth and brings His bride, the Church, to live with Him forever.

The only ones with complete access to God’s throne in Revelation 4 are the twenty-four elders, the four living creatures, and the angels. But in Revelation 21, the barrier of the sea no longer exists.

Catch that! We’ll no longer stand at a distance, separated by time and space from the throne of God. While He invites us to draw closer now with confidence (Hebrews 4:16), we’ll have full access to His throne. Isn’t that wonderful?

Over the centuries, what has kept people groups from each other? The ocean. Even with all our modern technology, the sea still separates super-powers. China, Russia, and Australia might as well be in another world. They don’t seem real to us because it takes so long to get there.

At the end of the ages, the sea will no longer separate people groups.

He will raise a banner for the nations
and gather the exiles of Israel;
he will assemble the scattered people of Judah
from the four quarters of the earth. – Isaiah 11:12

That verse refers to both the return of the exiles after the Babylonian captivity and the gathering of God’s people, the Church, at the end of time. Nations will never again be at odds. We won’t be Americans, British, Russian, or Saudi Arabian. Those who follow Christ will belong to God’s Kingdom. We will stand together shoulder to shoulder with people from every nation and every era with no barriers of difference between us.

In the meantime, Eternity starts now. God is with you in this moment. He reigns supreme. He is mightier than anything that threatens to destroy your life and livelihood, separate you from His love, or segregate you from anyone also made in His image. He is more powerful than the mightiest of seas.

He truly has prepared a special place for us (John 14:2,3). It’s more special than anything than we can imagine. It’s little catch phrases like “no sea” that give me a glimpse of Heaven’s reality and convince me all the more – I want to go there.

Check out these resources for more on Heaven’s reality:

The ministry of Don Piper:

90 Minutes in Heaven by Don Piper: 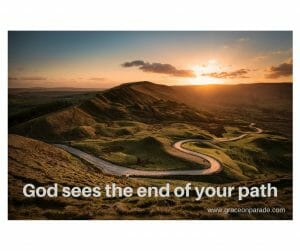 The 2018 Winter Olympics are almost over. I’m still thinking about the Opening Ceremony.

How exhilarating to watch 3,000 athletes from a vast array of nations file into the stadium at the 2018 Winter Olympics Opening Ceremony, their faces fill of happiness and hope. Of particular surprise were the number of countries who had never sent athletes to a Winter Olympics, especially those from warm weather climates. The pressure of competition wouldn’t start until the next day; for today, all are equal, excited and having a great time, waving to the cameras and crowds and taking selfies with new found friends.

What a special moment of hope when North Korea and South Korea wrapped hands around the Olympic torch in a rare moment of solidarity. If athletes can get along together in friendly rivalry, can’t nations drop their differences as well? It was idealistic and simplistic, all of us know that the political quagmire of differences is far more complex than who wins a Giant Slalom or bobsled race, but hope fuels the flame of the attempt to try.

The most memorable moment for me came in the first performance. Digital technology has transformed the already lavish Opening Ceremony production. Lights, fireworks and laser shows exploded from center stage. 1200 synchronized drones hovered far above the pentagon shaped stadium to send into our living rooms 3-D digitized images with a skateboarder, symbolic dove and the Olympic rings. It was the largest drone performance to date.

What did it look like to those who were there?

As I watched the amazing display, Katie Couric, NBC commentator, added this interesting perspective. “We don’t see the technology display you viewers at home can see.” She explained that, sitting in the stands, she could only see the ground show and, I can imagine, that was limited by her own vision.

Shortly after her comment, the camera zoomed in on one of the Korean dancers, clad in white and maroon. What must be her perspective of the Winter Olympics? What must it be like to be in this lavish performance with so much happening and only be able to see the back of the dancer in front?

If you were a participant in that dance, that would be your experience of the Opening Ceremonies of the Winter Games. The back of the dancer in front of you. Your next move. If you or your colleague made a major faux pas, that would be your take-away of the Opening Ceremonies. You would go home discouraged, wondering whether you would want to participate in a national dance performance again. Unless you watched a Youttube video later, you would never catch the God’s Eye grandeur television viewers saw.

The average Christ follower living seventy years after Christ’s resurrection was discouraged. Hostility reigned from without; corruption in the church corroded from within. In their ordinary life, Christians could only see the missteps of the person in front of them and their own insecurity. Church leaders perceived a bit more of the action; they saw how as a whole, congregations were flailing and failing. Was this all there was to this new religion called Christianity?

God gave the apostle John the vision of Revelation. He showed John the God’s Eye digital technology view of the grand and glorious scheme of God’s plan for the ages. It was intense. It was beautiful. The theme was obvious. God painted across the heavens the unquestionable certainty. God would deal with evil. God would protect the believer. And in the end, God would bring healing to the nations as no one else in their own strength could. Do you hear that, North and South Korea?

In your day-to-day life, you might see only the back of your next event. You might see the stage lights flicker, the glare of hostile onlookers, and the self-absorption of dance mates who don’t seem to care about their future as much as you do. The performance is going badly, you suspect, and you are helpless, you think, to change anything and rectify the situation. Life looks like it will only get worse.

Be assured. You are part of a grand Heaven-sized scale scheme to redeem the earth from the mess it has made. There is much you cannot see but you do see the one who is at the controls and He will end the end with a blaze of glory that ushers us into a glorious forever. For now, we content ourselves with a peek behind the curtain at the epic picture John paints for us at the end of the Bible. The theme is obvious. We won! Jesus reigns!

Faith is confident hope, Hebrews 11:1 says. Knowing what’s ahead and getting an exclusive look at the stadium view of time and space gives me a reason to hope in confidence. God is in control. He’s got it all figured out. And He will protect me and other believers through all of it.