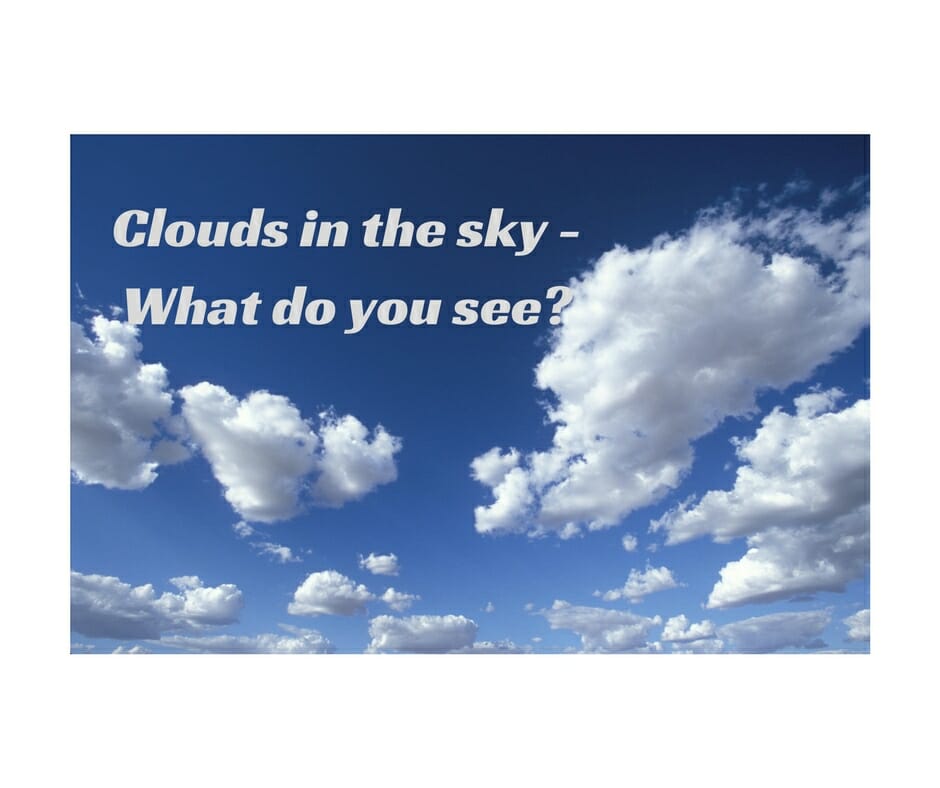 I saw clouds in the sky today.

Did you ever lay on your back on the warm prickly grass, face up to the warmth of the sun, and imagine shapes within the clouds in the sky? Well, maybe as a child. Now, only when we’re with our children, grandchildren, or Sunday School class do we allow our imaginations to roam outside the boundaries of decorum. We cup our hands over our eyes to guard from the sun’s glare, sway our backs till we look like sideways donkeys, and take on the imagination of a child once again.

Remember this conversation between Lucy, Charlie Brown, and Linus?

“Aren’t the clouds beautiful? They look like big balls of cotton… I could just lie here all day, and watch them drift by… If you use your imagination, you can see lots of things in the cloud formations… What do you think you see, Linus?“

“Well, those clouds up there look like the map of the British Honduras on the Caribbean… That cloud up there looks a little like the profile of Thomas Eakins, the famous painter and sculptor… And that group of clouds over there gives me the impression of the stoning of Stephen… I can see the apostle Paul standing there to one side…”

“Uh huh… That’s very good… What do you see in the clouds, Charlie Brown?”

“Well, I was going to say I saw a ducky and a horsie, but I changed my mind!”

Try as I might, I was like Charlie Brown when I was a child. My two-dimensional eyesight couldn’t make out the shapes other kids saw. I just saw smears of white on a blue background, like some minion had extra fun with a can of white and purple spray paint. I had a pre-Renascence mentality about the atmosphere. The sky was flat and so were the clouds. That’s what my eyes saw, so let it be written. To not look like I was lost in the fourteenth century, I played along with my childhood friends. I let my mind fill in the blanks and convinced everyone I had an over-active if not quirky imagination when it came to shapes of clouds.

My practical husband has said he could see rain squalls and snow bands in the clouds. That’s not possible, I often scoffed. You can’t see rain that far away. Rain are these clear little droplets, snow is white, and those clouds are dark and solid. I still saw bunny rabbits. I temporarily forgot he could see better than I can.

As airplanes in which I sat rose above billowing columns of white vapor, I tried to connect what I saw in the air with the view from the ground. Seeing clouds from the earth was like looking at the tip of an inverted iceberg. Earthlings could see only the bottoms and my lack of depth perception didn’t clue in that some clouds were at a higher elevation than other clouds.

Then I had the eye surgery that gave me better vision than I’ve ever had before.