WITH FRESH EYES: Winner of the ECPA Christian Book Award and the Selah Award. Get your copy here.
Home / What I Saw Today / Clouds In The Sky and the Reality of God 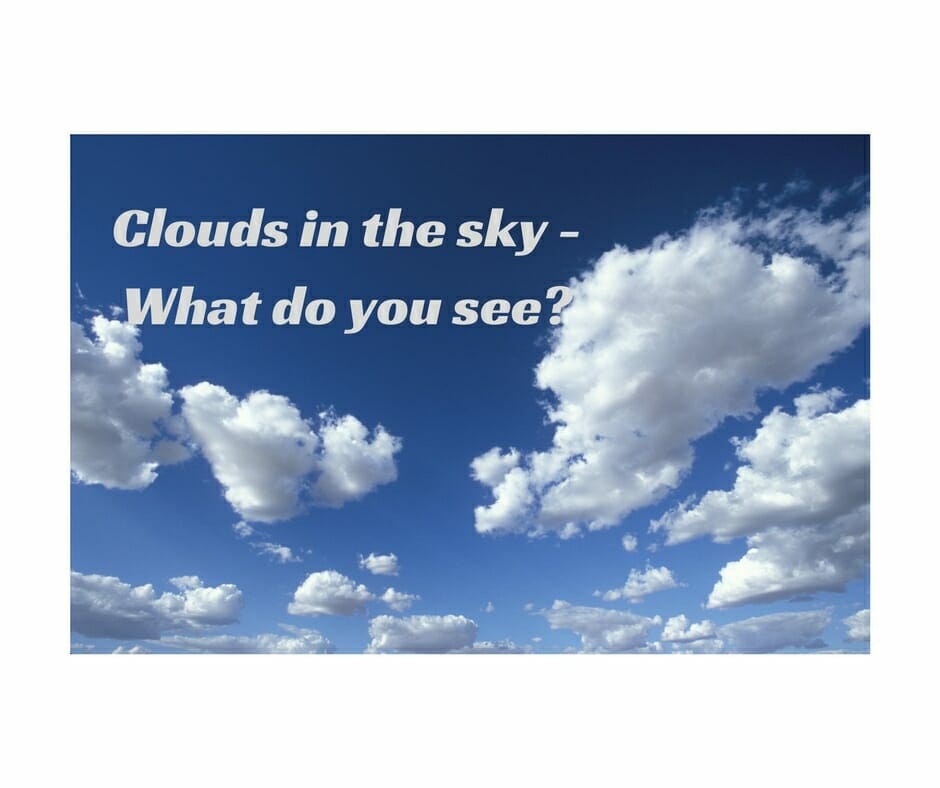 I saw clouds in the sky today.

Did you ever lay on your back on the warm prickly grass, face up to the warmth of the sun, and imagine shapes within the clouds in the sky? Well, maybe as a child. Now, only when we’re with our children, grandchildren, or Sunday School class do we allow our imaginations to roam outside the boundaries of decorum. We cup our hands over our eyes to guard from the sun’s glare, sway our backs till we look like sideways donkeys, and take on the imagination of a child once again.

Remember this conversation between Lucy, Charlie Brown, and Linus?

“Aren’t the clouds beautiful? They look like big balls of cotton… I could just lie here all day, and watch them drift by… If you use your imagination, you can see lots of things in the cloud formations… What do you think you see, Linus?“

“Well, those clouds up there look like the map of the British Honduras on the Caribbean… That cloud up there looks a little like the profile of Thomas Eakins, the famous painter and sculptor… And that group of clouds over there gives me the impression of the stoning of Stephen… I can see the apostle Paul standing there to one side…”

“Uh huh… That’s very good… What do you see in the clouds, Charlie Brown?”

“Well, I was going to say I saw a ducky and a horsie, but I changed my mind!”

Try as I might, I was like Charlie Brown when I was a child. My two-dimensional eyesight couldn’t make out the shapes other kids saw. I just saw smears of white on a blue background, like some minion had extra fun with a can of white and purple spray paint. I had a pre-Renascence mentality about the atmosphere. The sky was flat and so were the clouds. That’s what my eyes saw, so let it be written. To not look like I was lost in the fourteenth century, I played along with my childhood friends. I let my mind fill in the blanks and convinced everyone I had an over-active if not quirky imagination when it came to shapes of clouds.

My practical husband has said he could see rain squalls and snow bands in the clouds. That’s not possible, I often scoffed. You can’t see rain that far away. Rain are these clear little droplets, snow is white, and those clouds are dark and solid. I still saw bunny rabbits. I temporarily forgot he could see better than I can.

As airplanes in which I sat rose above billowing columns of white vapor, I tried to connect what I saw in the air with the view from the ground. Seeing clouds from the earth was like looking at the tip of an inverted iceberg. Earthlings could see only the bottoms and my lack of depth perception didn’t clue in that some clouds were at a higher elevation than other clouds.

Then I had the eye surgery that gave me better vision than I’ve ever had before.

I discovered clouds were more than filmy paint sprays. While having depth and substance, they were malleable, ever changing with the slightest breath of wind. An unseen hand remolded them faster than a four-year-old with a wad of play dough.

God must have had fun the day he created the blueprint for clouds. Water vapor masses that look solid but aren’t. Humongous billowing towers of moisture shifting from place to place with a mere whim. Shapeless yet so 3-D, children can see pictures in the sky. Scientifically complex but so beautiful, photographers never tire of taking countless pictures.

I had to admit with a helping of humility that my perceptions had been wrong all these years. Imagine how my childhood friends would laugh at me now if I said, “That’s not the way clouds are supposed to look. Why when I was a child . . .”

We use that line a lot about things we don’t understand.

All of us cradle initial perceptions that are inaccurate and incomplete. Childhood has given us only a partial and sometimes inaccurate story. To put it in Charlie Brown terms, we may still be seeing duckies and horsies when the clouds in the sky host the Apostle Paul and a map of the Caribbean. With feet are glued to the ground, we see a fraction of God’s existence even as He invites us to bounce from cloud to higher cloud to revel in all the complexities of His glorious nature.

As we age, our perceptions change, our knowledge increases, and we learn to shrug off childish fantasies. The apostle Paul observed that we give up childish ways when we reach into mature adulthood (1 Corinthians 13:11). We have to allow ourselves to let go of those incomplete truths and embrace God’s fuller truth in all its three-dimensional glory.

What conclusions from your childhood do you still believe?

What is the complete truth? Do you still stubbornly cling to childhood perceptions, refusing to believe what God’s Words tells you and then wondering why those conclusions feel like collapsing vapors in your hands? I challenge you to let go and take hold of what God says is true. Trust that you may not understand right away all there is to know; after all, your inability to understand does not define reality.

God promised that He will instruct you and teach you in the way you should go (Psalm 32:8) Paul says to not be conformed to the ways of this world; instead, allow God to transform your mind so that you may know His perfect will (Romans 12:2).

If God can transform my eyesight so I see three-dimensional clouds rather than white smudges, He can transform your thinking to see Him as He really is.

If God can transform my eyesight so I see three-dimensional clouds rather than white smudges, He can transform your thinking to see Him as He really is.

Until then, take Him at His Word:

Our understanding of God won’t reach 20/20 clarity until we see Him face to face in Heaven’s halls (I Corinthians 13:12). So until then, lay on your back, soak up the sunshine of His love for you, and imagine what His plans for you might look like.

After all, God is so much more than we can see or imagine.

If you would like to celebrate God’s power, creativity and and working in the world that you and others see each day, come join the Facebook group, “What I Saw Today.”

Previous Post: « What’s Next: Four Ways To Spend The Week After Easter
Next Post: Cornbread Dressing: Great Way To Use Up That Leftover Cornbread »