WITH FRESH EYES: Winner of the ECPA Christian Book Award and the Selah Award. Get your copy here.
Home / Grace on Parade / ACFW And New Directions

If I had to put what I learned at the ACFW conference in a Twitter sized sentence, here it is: 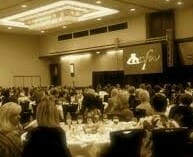 “God may be using the boulders in your path to move you a new direction.”

My class on the first day of the American Christian Fiction Writer’s Conference (ACFW) was putting me to sleep. That’s hard to do at 9:30 in the morning. Worse yet, it was my continuing education class which meant four hours of the same material at the same plodding pace. I kept trying to hang in there, hoping the speaker was just off to a slow start and things would get better. Either she was having a bad hair day or my brain was too foggy to catch her style. I’m a linear kind of student and it seemed her circular reasoning and my linear brain were making only random connections.

If it had been a one hour workshop, I would have hung in there until the break. But there was no way I could sit through 3 ½ more hours. I may have been able to glean tidbits of useful information throughout the day, but I finally made the executive decision that I could probably use 3 ½ hours at a conference more productively.

Please don’t think I was rude for walking out. Workshops at writers’ conference come attached with a revolving door. Conferees come and go because they may have an appointment with an editor, agent, or mentor in the middle of a class session. We’re respectful as we leave, we really are.

In spite of the protocol, I still felt guilty, wondering if I should have toughed it out. It soon became apparent that I was meant to be elsewhere.

This particular conference allows us to sign up for two appointments. If any more are available, we can sign up for an extra session. So I opted to try for a third appointment. Obviously , many other conferees had the same idea, for the queue snaked around the corner. I stood in line over an hour, barely making it to my first appointment.

As I chatted with those around me, the woman in front of me suddenly exclaimed, “Boy I need a a critique partner.” My ears perked up as tall as my Welsh Corgi’s ears. Just the night before, I had written on my list of what I wanted to accomplish at the conference, “Fin a critique partner.” Could this be God’s answer?

Have you ever just immediately bonded with someone? That’s what happened. Soon another lady joined our chat and as she expressed so eloquently, one moment we were strangers, the next moment we were talking like we were long-time friends.

Wow, I thought, God wanted me out of that classroom so I could meet my new critique partners. Ah, I’m so guilty of putting limits on God’s lavish love.

I finally reached the desk. I got the appointment I wanted. It was to be mid-afternoon. Instead of returning to my continuing education class, I used the time to review the publishing house, revamp my presentation, and pray.

And I had one of the best editor appointments I have ever had at a writer’s conference.

“Trust in the Lord with all your heart and lean not on your own understanding.

In all your ways acknowledge Him and He will direct your paths.”

I’m grateful for non-connecting workshops at conferences. I’m grateful that God directs – and at times, redirects our paths.

Stay tuned for more God-moments from the ACFW  conference.