WITH FRESH EYES: Winner of the ECPA Christian Book Award and the Selah Award. Get your copy here.
Home / What I Saw Today / Courage, Dedication, and Resilience: The Stuff Lions Are Made Of 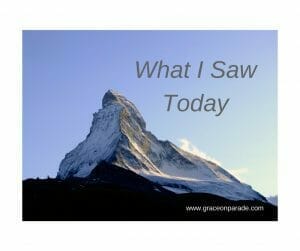 Guess what I saw today. I saw courage. Courage, dedication, and resilience.

I hang out with a very special group of men. Men who have taught me the meaning of those three important words.

Every year, during first two weeks of October when traffic flows through our little town en route to the Spoon River Festival, the local Lions’ club to which I belong holds a candy fundraising drive. Four men station themselves on the thin yellow line at each sector of the main intersection. As cars pull to a stop, Lions members offer the drivers a roll of mints. Locals, long-time Spoon River aficionados, and drivers observant of the plastic money container in the Lion’s hand know a donation is appreciated but not expected. Each year, our group of twenty club members raises over $1000 to buy eyeglasses and hearing aids for needy community members. 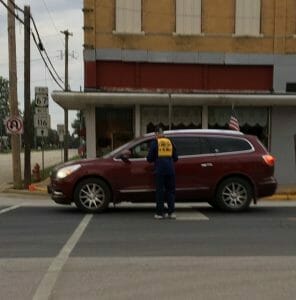 I’m the only female member of the group. Two other wives actively serve with their husbands but haven’t crossed the line into membership. I’m a Lioness because I want to give back to a group who gave to me so many years ago. Almost all the men are older than I am which makes them take a rather fatherly or big brother protective attitude toward me. Because of my limited vision, for example, they won’t let me stand in the middle of the street, collecting donations. One Lion felt no reserve when he pulled me out of the way of an oncoming car when I delivered more candy to him.

I chafed at their restriction.

I could watch out for myself. After all, I can see better now.

That may be true but their concern was validated when one of them was struck by a car this year.

A woman turning left was distracted by an oncoming school bus. Trying to beat the bus, she turned in front of it. Her fender caught the edge of the Lions’ jacket, pulled it from his shoulders, knocked him to the ground, and drug him several feet.

Bruised and banged up, Lion Bill never went to the E.R. The only concession he made was that he skipped Sunday School the next morning after attending worship service. He was back at at the intersection the following Saturday for Round Two of the Candy Sale, merely commenting that it was the first collision in 28 years of candy sales. At our latest Lions’ Club meeting, he joked about breaking his hip from the fall and making a miraculous recovery. At that moment, his hips probably felt better than my knees. The ligaments in my legs turned to jelly just hearing him tell about the accident.

They were out that second Saturday morning in spite of impending rain, doing the job they had dedicated themselves to do—greeting travelers, offering candy, and collecting donations for a good cause. Don’t want to miss out on raising money to help the community, now do we?

After the car knocked him down, Bill untangled himself from his coat, got up, did the necessary healing, and got back to work. That’s courage. That’s resilience.

His reaction to his accident reminds me of Hebrews 12:1:

“Therefore, since we are surrounded by such a great cloud of witnesses, let us throw off everything that hinders and the sin that so easily entangles. And let us run with perseverance the race marked out for us.”

I want to be like Bill and the other Lions. I want to be a person able to brush aside my own personal hurts because there’s work to be done. 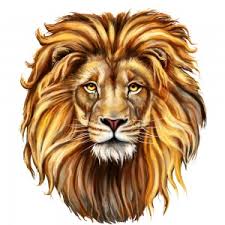 As passionate as I am for the work of the Lions’ Club International, God’s Club is far more important. It has eternal value. Eyewear and hearing aids are temporary fixes; salvation of the soul lasts forever. How could I possibly let physical or emotional hurt delay me from running the race God has planned for me? Yes, I need to care for my wounds. I need to heal but, like Lion Bill, I need to be a Lion and not a Mouse.

My goal this week is to focus on the bigger picture instead on my own personal comfort level and to let nothing stop me from moving forward.

Will you join me?

Previous Post: « Guilt, Rubber Balls and Glue Sticks: How To Bounce Back From False Guilt
Next Post: 7 Steps Toward Conflict Resolution »