WITH FRESH EYES: Winner of the ECPA Christian Book Award and the Selah Award. Get your copy here.
Home / Grace on Parade / Dogs and People Training

I’ve been taking dog training lessons from my dog. 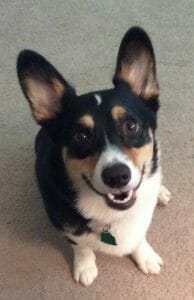 If you’ve followed my posts on Facebook, you know a bundle of energy in the form of a two year  Pembroke Welsh Corgi named Baxter has entered our quiet family life.

Our family has been blessed with two wonderful, loving, quiet dogs who have adored us and we’ve adored them. Riley, the yellow Labrador, was a 90 pound bucket of love. He’d welcome anyone into our house. We would take him to the park and let him work a crowd of children. If anyone was scared of dogs, Riley was the perfect pet to teach someone to trust dogs again.

Tuesday, our Cardigan Welsh Corgi, was faithful as the day is long. She’s quiet, attentive, and slightly bossy with a bit of the comic thrown in to keep us on our toes. We’ve called her our nurse mutt and our hall monitor. I’ve seen her minister to despondent and troubled visitors by curling up in their laps and licking tears from their hands. Each morning, Tuesday (yes, that’s her name, not my choice) would stand by my office door and bark at me until I sat in my chair and turned on my computer. Then she’d curl at my feet, content that she’d done her job. Both dogs loved to curl next to us or stretch across our laps. They loved ear scratches, belly rubs and were content to be with us.

Baxter is like a two year old boy on steroids. The walks designed to expend his pent up energy turn into mega-aerobic workouts for me as I find myself dragged through yards and down sidewalks on a route only Billy from the comic strip, “Family Circus” could design. He thinks tug of war with his leash is a neat game. Every bird, squirrel, barking dog, and unexpected noise is a reason to lunge forward, leaving me unbalanced.

After weeks of leash training, I blush to report that, like any teacher has discovered, my dog has taught me more than I’ve probably taught him. Baxter is teaching me five ways to get along better with both kids and adults.

Gentleness is more effective than harshness. In the first few days, I found myself yelling at Baxter. A lot. One day as I tried to contain him, I started stroking him, massaging him all over, dropping my voice to almost whisper status. Amazingly he calmed down. As he gyrates toward the door, anticipating his mad dash to the backyard, the calm, soft voice soothes him.

During our week of VBS, I tried that out on a group of preschoolers. It worked then too. The wise man of Proverbs who said, “A soft answer turns away wrath (Proverbs 15:1)” was right.

There are occasions I need to speak firmly to my dog and to the children under my care. But not all the time. I need to try this method on my husband!

Traditional methods don’t work for everyone. As I struggled to control Baxter in those early days, my mother and my sister who know far more about dog obedience than I do, gave me helpful advice. I’ve been around them long enough to know their suggestions should have worked. But the advice wasn’t working. Baxter wasn’t responding. One day, when I attempted to get him to stay with me as I turned, I bent down to his level, spoke his name softly, and gave a command. He immediately responded.

I should have remembered this one. When my children were toddlers, I only had to raise my hand and my older daughter would burst into tears of repentance. I could have beat my other daughter black and blue and it wouldn’t phase her. (Don’t worry. I never did.) Dogs and children are unique entities. They’re all wired differently. As dog owners and parents, we get to figure out what discipline and teaching methods work best for each one. Hopefully we figure it out quickly before too much damage is done! 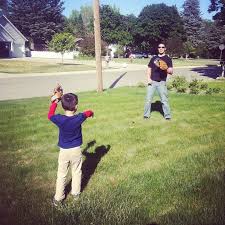 Play is a love language. I so wanted Baxter to be just like Tuesday. I wanted him to give me gentle licks on the nose, nuzzles for attention, and early evening cuddles on the couch as I read or knit. Not gonna happen. Like a nine-year-boy, Baxter wiggled out of every attempt at touch. He perfected dog zoomies around our house, gnawed at my husband’s moving feet, and growled playfully when I snatched a washrag he’d stolen from the side of the tub. His antics reminded me of the stereotypical little boy, glove and ball in hand saying to a departing back, “Dad, will you play ball with me?” Countless fathers have realized too late that play was the child’s reassurance of Dad’s love.

Why is play such a strong love language? Because play sacrifices my time, my agenda, and my preferences. Play puts us on the same playing field so to speak. We share a unity, a togetherness that can’t be matched.

The greatest moments of joy in our family life have been when we’ve worked together on a project or played a game together. That’s a lot different than sitting in the same room, each doing our own thing. A hug is nice. Touch is important. Time spent in play is a shared love of its own.

Security is found in boundaries. Baxter arrived with a crate barely big enough for him to turn around in. At first, I’d hoped to wean him from his crate, giving him free reign over the house at night and while we are gone. To my surprise, Baxter often voluntarily went to his crate. Leary of strangers, he needed no extra coaching to go to his crate when the doorbell rang. He thrives best on meals at a regular time, a regular bed time, and scheduled potty breaks.

Boundaries come in the form of routine, consistency, limited resources, and rules. Baxter – and kids too – falter when the boundaries are removed or enlarged. As long as the boundaries give enough freedom for self-expression and personal choice, everyone does best with structure.

Respect their limits. Both my dogs have bladders the size of five hours. I cannot expect them to lay quietly past 6:30 a.m. Tuesday can hardly handle a walk to the mailbox while Baxter could run for blocks. I set limits but they have their limits as well. If I expect them to behave, I have to know what they can handle and not push them beyond their capabilities.

I saw this in our church’s Vacation Bible School preschool class. The program lasted two and a half hours each night, but at the two hour mark, the kids shut down. The schedule called for lesson review, the most important part of the evening, at that hour. Midstream, the lead teacher and I switched the review time with the craft time and chose simpler crafts. We had to adapt to their needs instead of expecting them to behave beyond their limits.

Managing our own limitations is a skill we do almost automatically but one that others seldom catch. My husband didn’t understand for many years why I empty the dishwasher last thing at night. “My brain and my eyes are tired,” I explained. “I can put dishes away without thinking.” Before we are quick to discipline a child or criticize an adult for not acting as we expect, we need to

consider if we’ve pushed them beyond their limits. I’ve often said it’s more possible for it to snow in the Sahara Desert than for a two-year-old to sit still for a half hour through a church service. The child isn’t a bad child if they can’t sit still; they are merely acting like a two-year-old. The same is true with an elderly parent. They aren’t taking twenty minutes in the bathroom to spite you or to be stubborn; they’re tired, old and the body is slowing down.

Baxter and I are still learning about each other. I suspect it will take awhile until we are fully compatible. If I’m honest, it took a while for Tuesday to acclimate to our family too. It takes time for any relationship to gell. In the meantime, I’ll stay consistent and appreciate Baxter’s singular qualities instead expecting him to be what I want him to be or to exhibit the desirable traits of my other dogs. I’ll also apply those same principles to my human relationships.

Anyone want to play “Catch the washrag?”