WITH FRESH EYES: Winner of the ECPA Christian Book Award and the Selah Award. Get your copy here.
Home / Grace on Parade / Dreamville, USA

What would be your dream destination?  A cruise around the Greek Isles? A cabin in the woods? An exciting weekend getaway to a cityscape?

Our dream destinations change with the seasons and circumstances of life.  As we age, a trip to the big city filled with historic tours, gourmet dining and theatre doesn’t appeal to my husband and me as much.  There are days our dream destination is nothing more than the quiet of our home, our loving Welsh Corgi to greet us at the door, and our cell phones tucked in a bureau drawer!

For the young, wet-behind-the-ears servicemen of World War Two, their dream destination was very simple.  A meal and a friendly face would suffice. Something that reminded them of home and that they were not alone in their service to their country.  That’s why the small town of Dennison, Ohio, half way between Columbus, Ohio and Pittsburg, Pennsylvania, got dubbed as “Dreamville” by the over 1.3 million soldiers who encountered the town at its finest hour.

In March of 1942, a small group of women met a trainload of servicemen headed for the different fronts or training camps of war with trays of sandwiches, cookies, doughnuts, coffee, magazines, and friendly smiles.  They never anticipated that soon, as many as twenty-two trains would roll through Dennison on a daily basis.  But they rose to the challenge, turning the work over to the organizational skills of the Salvation Army and its appointed canteen director, Elizabeth Brooks.  Soon, volunteers from seven counties would take shifts in preparing free food for the servicemen.  It was their way of doing something for the men, caring for the soldiers in a way they hoped others were caring for their own sons, husbands and fathers.

“You helped and served others, hoping someone else was helping and serving the ones you loved and knew, and realizing you might be the answer to a mother’s prayer that someone take care of her boy,” one former volunteer said.

Soon, the little town of Dennison had a world-wide reputation. Servicemen who had already experienced the good will of the Dennison ladies would torture their seat mates and fox hole buddies with stories of the free food and friendly smiles.  When the conductors announced, “Next stop, Dennison,” the men would pull themselves together, comb their hair, button their shirts, and get ready to de-board. Contrary to what some might believe about various canteens and USO dance floors, they weren’t looking for pretty faces or girlfriends.  Actually the boys gravitated to the smiles and warmth of the older women, longing for a reassuring look from someone who would remind them of mom and home.

Just a sandwich. Just a smile. Such small gestures. But the combination made a profound difference to boys already homesick and fearful of the future.  One private wrote this grateful note:

“…Words can never tell you how much I appreciated your most generous gift . . . with folks like you behind us it gives the added incentive that some of us might lack, to fight harder and better than ever before, and it’s people like you that make the old USA. the best nation in the world, and worth working and fighting for.”

This story touches me on so many levels. It’s a story of sacrifice, of community service.  It’s a prime example of what Wendy Zook, curator of the Dennison Railroad Museum, 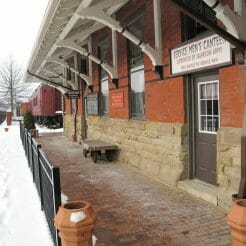 labels the “volunteer ethic” of the Midwest – the desire to help others in need even if they are strangers.  In fact, this story gripped my heart so much, I made it the setting of my most recent completed novel.  I asked myself the question, “How would working in such a canteen change the heart and mind of a local girl?” and I created the character of Gina, a young woman ostracized from Dennison society because of her Italian roots until she finds grace at the Canteen. It, in effect, became her Dreamville.

I had the privilege of interviewing several women who had worked or whose mothers had worked at the canteen.  One of these precious women was Veda, the mother of one of my dearest friends while I lived in the county north of Dennison. Looking back on her days of serving as a volunteer, 92-year-old Veda expressed her sentiments about the canteen for servicemen at “Dreamville” this way: “I felt good that I gave of my time.”

Where is your Dreamville?