WITH FRESH EYES: Winner of the ECPA Christian Book Award and the Selah Award. Get your copy here.
Home / Grace on Parade / Just A Bit of Encouragement

Encouragement is like throwing a stone into the center of a pond and watching the ripples spread outward, ever growing larger, ever widening in the wake of its impact.  One little bit leads to a whole lot of wonderful things.

For many years, Tom owned a sign painting business in his hometown. On the side, he dabbled with watercolors, painting pictures of historical sites around his hometown. When a Rotary Club asked him to do a watercolor for a Christmas card fundraiser, Tom’s second career was born. Soon, Tom sold his sign business and devoted himself to creating Christmas cards, selling over a million cards from his depictions of over twenty historical sites. 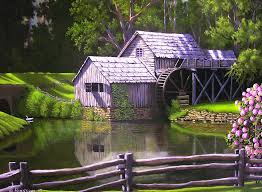 But when he lost his entire family – his wife and two children – Tom’s passion for painting died with them. For many long years, Tom never lifted a paintbrush. That is, until his 89th summer.

In the middle of those dark years, Tom went into an assisted living center. That’s when one of my closest friends met Tom. She was having lunch “with the guys” including her uncle by marriage. When she realized who Tom was, she asked him what kept him from painting any longer. He had brushes and paints, he admitted, but he didn’t have any pictures to work from. Confined to the inside of the facility, he would have to do what is called copy art.

“Paint something for me,” my friend said. “I’ll bring you some pictures and I’ll pay you whatever.”

My friend scoured around on the Internet and brought Tom some pictures. She then moved on to other things, forgetting about her encounter with Tom the painter.

Several weeks later, my friend’s husband went to visit his uncle who has a bit of dementia.

“Tom told me I’m supposed to give your wife something, now what was it?” Uncle fussed and fumed and fretted, finally rummaging in his desk. He drew out a beautiful watercolor.

Almost as an aside, my friend’s husband told her later, “Oh Uncle sent you something from Tom. He said he wanted to just give it to you.”

The God-wink in this story is that Tom and Uncle didn’t know that day was my friend’s birthday. It was the best birthday present she could have ever received. She called me the next day, telling the story with deep emotion. She promptly took the picture of the stone house and water wheel to be framed and I got to see it hanging in a prominent place in her home. Out of respect for Tom’s privacy, I’m not displaying the picture here.

What makes this story so personal to me is what happened after my friend told me what Tom had done for her.  Several days later, my mother who is in a retirement center on the other side of the country, was cajoled into digging out her pencil drawings for a residents’ talent show. Everyone ooed and ahhed over the drawings, asking what else she had. My aunt brought some other pictures Mom had stored at Auntie’s home and the facility put up an exhibit of five of my mother’s artwork in the facility atrium.

Arlene, who doesn’t usually like to draw attention to herself, told me the story with a hint of surprise and delight at the stir her drawings had caused. Of course, I thought it was wonderful.

“Well . . . I am feeling more perky these days.” Wow. That’s more positive reaction than I’ve had from her for several years. I pressed the issue.

“What’s keeping you from doing it?”

“I don’t have my supplies anymore and I can’t get out.”

“No problem. We can help you there.”

She sighed. “I’m too old for this.

Then I told her the story about Tom, the famous painter, who, at 89 years old, painted a picture for my girlfriend and surprised her with it on her birthday, all because she encouraged him to try again.

Tom is busy painting more pictures. And Mom has found her pencils.

“Encourage one another and build each other up, just as in fact you are doing.”

Encouragement infuses courage in others to try again. Encouragement makes it safe to take risks, because you promise you’ll be there to help through the rough times. Encouragement steadies the hand and puts resolve into the heart. Encouragement believes that someone can be better than even they think they can be. Encouragement cheers at the least bit of effort and stays with the person to see it through. Encouragement cries happy tears when you see God partnering with your words to bring about beautiful things.

And you never know who else might be listening.

Encouragement steadies the hand and puts resolve into the heart.