WITH FRESH EYES: Winner of the ECPA Christian Book Award and the Selah Award. Get your copy here.
Home / Recipes / Fried Cabbage and Noodles
Jump to Recipe Print Recipe

I love living in a farming community during the months of August and September. Those are the months that I catch a glimpse of the church “having all things in common.”

In one week, I was the happy recipient of the overflow of thriving gardens. Gloria gave me part of a huge head of cabbage and some new potatoes. Mike met me at the door with two quarts sized bags of green beans already washed and cut. Alice (oh, God bless you, Alice!) gave me a bowl of black raspberries from the bushes on her hill, apologizing that this year’s crop wasn’t so plentiful. But she had enough to share with us! Last year’s corn crop was so plentiful that some dear soul would leave a bag of sweet corn on my doorstep, ring my doorbell, and then run away. Did they think I was going to turn it down? Whoever it was, thank you, thank you, thank you. Can I make you some homemade bread?

Every week, the table beside our congregation’s coffee stand groans under the weight of tomatoes, peppers, and zucchini free for the taking. One person’s overflow provides the needs of those who have not.

The generosity extends beyond harvest and food. As couples reach retirement and our tummies start to shrink, we’ve started to share items we can’t eat up by ourselves. Mike and Anne split a bag of Gala apples with us and we whack off a hunk of our watermelon or cantaloupe to give to them. When our daughter zipped home from China only to leave two days later for her new job in Iowa, ten church people showed up to load her trailer. At the other end, a dozen people from the church near her new apartment converged to unload her possessions in a record twenty minutes.

We share what we have and no one is in need. That sounds like the early church to me.

My Friend, Caroline from Ohio, shared this recipe for Fried Cabbage and Noodles with me. It quickly became a family favorite. Just recently I learned that it is a Polish dish, called “Haluski.” My daughter has worked in short term missions in Poland, so that made it even more special. When I decided to share it with you, I had to make it so I could give you concise measurements. You can easily adapt it to your own tastes. The cabbage cooks down quite a bit so I always tend to add too many noodles.

Perhaps you can find a fresh head of cabbage from a summer garden to enjoy this summer treat. While you’re at it, browse through your recipe file. What’s a recipe you can share with a friend? Who knows? It might quickly become one of their family favorites too. 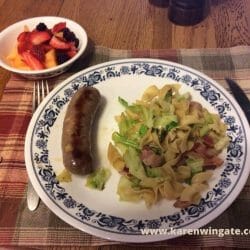