WITH FRESH EYES: Winner of the ECPA Christian Book Award and the Selah Award. Get your copy here.
Home / Grace on Parade / Grace Can Be Fun

Vacation Bible School is one of my favorite church events.  It’s one week where people who often are not involved in the church activities all come together to use their various gifts to create a program  that reaches out to children in our community.  How much better can it get?

I found out.  I found out by watching a church elder display grace.

The Saturday after our VBS program concluded, we held a carnival for the children who had attended.  We had games, food, pony rides and a dunk tank. The promise was that if the kids raised over $500 for the mission of the week, we would provide a dunk tank and our long-suffering youth minister would be the “dunkee.” 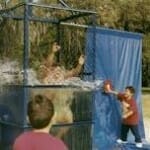 Yet a problem soon presented itself. Even though some kids hit the target with the ball, they didn’t hit it hard enough to activate the dunk tank.   No problem for “Duke,” the elder who was standing near by. Duke said to the first child who turned aside with a frustrated look on his face, “Well, what’s the matter with this tank?  Let’s test this out.”  He punched the target with his hand and sent Adam “dunking.”  What a gracious way to give the kids success, I thought.  Duke didn’t draw attention to them, didn’t make sure EVERY kid got to “dunk” Adam even if they missed.  If the effort was there, Duke made it possible for them to succeed without drawing attention to their failure.

That’s the kind of guy Duke is. Last year, the rewards for the missions goal was throwing raw eggs at Adam.  Often, the eggs would hit Adam but not break.  My husband, the minister spotted Duke quietly cracking some eggs just slightly, enough to give the kids a bit of an advantage.  He did this without brining attention to himself, gave the kids the dignity of trying but gave them just a little bit of an edge so they could succeed on their own.

Now I call that creative grace!