WITH FRESH EYES: Winner of the ECPA Christian Book Award and the Selah Award. Get your copy here.
Home / Grace on Parade / The Grace of Listening

Sometimes, the best present we can give a person in need is a listening ear. 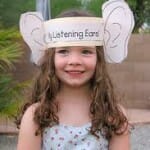 It took the gift of a friend and a tough time in my life to teach me how that isn’t so cliché as it sounds.

My younger daughter has the same vision issues that I do.  We are so thankful the difference thirty years have made in medical procedures.  While doctors didn’t even want to touch my eyes for nine months, Christine was whisked into an operating room at three weeks of age.

It couldn’t have come at a worse time.

The day before she was born, my husband accepted a church ministry in Colorado, 1500 miles from where we lived in Cincinnati.  He arrived home from his interview eight hours before Christine was born. Talk about cutting it close. He arrived home eight days before our first daughter’s birth from his dad’s funeral. Eight days, eight hours, see the trend? I told him with that record, I didn’t want to have any more kids.

My mom flew in from Arizona two days later to help me with the baby and left the day Christine was diagnosed with congenital cataracts.  We had to make a series of fast decisions about surgery dates, moving dates, boxes to pack, moving vans to rent.  To say I was overwhelmed is an understatement.

Because the eye disorder was genetic, we suspected from the moment Christine wouldn’t open her eyes after birth that the odds had won. On the other hand, how can a parent ever be prepared to hear that their child is handicapped?  Reality smacked me in the face.  Of anyone, I would know best what Christine would face: the struggles, the frustrations, the teasing at school, the unkind comments, the need to have the drive to work twice as hard to be half as good. As a visually impaired person myself, could I guide her effectively through those murky waters?

I was too numb to articulate any of that.  At least I was until Cletis came.

Cletis had issues of his own.  At six years old, Cletis went into surgery for a routine tonsillectomy. But when he had heart failure in the middle of the surgery, he came out of the operating room with a tracheal tube and a mild form of cerebral palsy that left him with poor vision, a drunken gait, and slurred speech.

Cletis was the kindest of souls. He had been my husband’s roommate before we got married and Cletis became part of our family.  He was studying for a Master’s in counseling at the seminary my husband and I also attended. While he struggled with the intense classroom work of grad school, Cletis towered over professors and students alike with his huge heart of compassion and sensitivity to the needs of others.

It was the day after my mom left, the day after we knew Christine would need surgery.  Still weak from childbirth and exhausted from a harrowing yesterday as we traveled from doctor’s office to surgeon’s office with a three week old baby, I was beyond numb.  The opened door revealed Cletis leaning against the post of my small front door stoop.  He said one sentence. 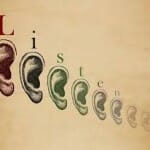 I invited him in and we sat at my dining room table.  He didn’t even take his coat off.

I wasn’t even sure how he had heard our news.  I lifted my hands in the air.  “I don’t know that there’s much to tell.  I don’t have anything to say, really.  Christine will have two different surgeries next week.”

I paused.  Cletis didn’t say anything.  And then I talked non-stop for forty-five minutes. The floodgates of my soul opened. I talked about what it might be like to watch my baby go into surgery.  I talked about the move from Ohio to Colorado and the uncertainty of being a minister’s wife with a handicapped child.  I spoke of my fears for Christine, wondering if I would be a good mommy, how I would protect her, how to help her become an overcomer.  Naturally leaky at the corners of my eyes, I was proud of myself.  My fingers became wet only twice in forty-five minutes of non-stop talk.

Finally I stoped.  The well had run dry.

Cletis stood up.  “All right,” he said.  With that, he walked out the door, leaving me still sitting at my kitchen table, filled with peace and courage to face the coming weeks.

Cletis kept his word.  He came to listen. He offered what I needed, a chance to talk even thought I didn’t know that was what I needed.

James told his readers: “My dear borthers, take note of this. Everyone should be quick to listen, slow to speak and slow to become angry (James 1:19).”  How very wise.  How very true.

Oliver Wendell Holmes said, “It is the provence of knowledge to speak.  And it is the privilege of wisdom to listen.”

Sometimes people need nothing more than a listening ear. Hurting people need the gift of being listened to, the grace of not being censored or judged, the respect that anything said needs to be said.

Lord, arrange my life to cross paths with someone who needs a listening ear.  Help me be a good listener – like Cletis.

Hurting people need the gift of being listened to without censor. Tweet this.