WITH FRESH EYES: Winner of the ECPA Christian Book Award and the Selah Award. Get your copy here.
Home / Grace on Parade / Crazy About Heaven: My Family’s Reaction to Death

The way my family announced the death of my uncle, some people have got to think we’re crazy.

We didn’t say the normal things like, “He passed,” “He passed away,” or “He’s gone to a better place.” We weren’t even blunt and factual by saying “He died.” Instead, Facebook and phone messages were filled with messages like, “We have a graduation to celebrate,” “There’s a celebration going on in Heaven,” and “Dad went to see Jesus.” 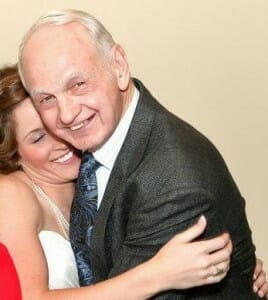 Now my family is crazy about a lot of things, but that’s another subject.  I’m sitting here just imagining how our carefully crafted announcements sound to other people.  We sound, well, actually joyful. We see something that usually wreaks so much sorrow and heartache as a good and positive thing.

Uh, we’re talking about a death, right? Are you people nuts? Do you feel any grief? Are you shedding any tears?

Believe me, we are.  Uncle Ron was well loved by family, grandkids, friends, church members, and a whole network of people around the world whose lives he and my aunt Evelyn touched.  He was the guy who would drop anything to do something for someone else.  He was a bundle of energy, never sitting still for long.  His eyebrows would shoot up and he would grin big when he was on a tease rampage.  And oh, he loved Jesus.  His relationship with the Lord was the real deal – it wasn’t just a dutiful following of the rules.  Two days before he died, he was talking to two nurses about their relationship with God.

It’s been heart wrenching to see this very active man lose muscle tone over the last six months that rendered him helpless.  Too soon, too late, he was diagnosed with Lou Gehrig’s disease.  When he ended up in the emergency room with breathing difficulties, we realized for the first time that the man we thought would be around for many more years could possibly leave this earth soon.

Yes, I’ve shed my tears over the last few days. I’m going to miss him. And so will a lot of people.

But the tears are only a veneer for what’s deep down. You see we love Uncle Ron enough to let him go. We have the hope that he is going to a better place. That hope is not just wishful thinking. It’s a confidence that such a better place as described by the Bible is for real and it is accessible through our faith in Christ. We’re excited that finally, Uncle Ron has conquered the trials of life and reached his final destination.

Why is Heaven a better option than staying here on Earth?

Why is Heaven a better option for Uncle Ron than staying here?

He has no pain. His muscle tone is restored. He has reclaimed that boundless energy. His voice, cracked and thinned by years of preaching is full, deep, and confident once again. We affectionately know Uncle Ron for his ability to talk someone into giving him a great deal. I can see it now.  He’s already cornered Gabriel, found a sweet deal on his final property, and is busy fixing it up for him and Evelyn.

The unseen has become seen. Christians live by faith, believing in something they cannot see. The beauty of Heaven is that we will know that our faith was not in vain, that the unseen we believed in is indeed real. 1 John 3:2 says that someday we will see Jesus just as He is. Frankly, I’m a little jealous! Uncle Ron is seeing Jesus in all His glory. All those things that don’t make sense here on earth will be more clear than the retina display of an IPAD Mini.

It’s reunion time.  While he is gone from our circle, he is experiencing the biggest, best and longest lasting reunion ever. I am so excited for him. The family is imagining that after worshiping at the feet of Jesus, Uncle Ron has looked up Grandpa whom he baptized when Grandpa was 86 years old. Those two guys, much to my grand-mother’s chagrin, would talk theology for hours. Grandpa’s favorite opening line must have been “What I don’t understand is . . .” Now, having been in Heaven for a while, Grandpa has a few things to share with Uncle Ron. Oh, don’t I wish I could be a little bird on Heaven’s walls to see them delve into one of those rich conversations over Heaven’s best brew of coffee.

It’s all over. The goal of our life is to get to Heaven. Earthly life throws many obstacles in our path, trying to distract us from following the Lord we’ve committed our lives to. For the Christian, death is a sweet victory, like reaching a finish line. Whew! We made it. We’re victorious! No wonder Jesus’ last words were, “It is finished!”

Our parting is not permanent. Like Uncle Ron, we’ll get there someday too. We’ll see him again. We’ll enjoy Jesus together.We’ll join in on that conversation with Grandpa. And it will be wonderful.

So yes, the death of a Christian is a celebration, a graduation. Unconditional love is wanting the best for someone and life in Heaven experiencing the physical presence of Jesus is the best, the very best. So we let them go, quietly missing their presence but thrilled that they can finally enjoy what God has promised to them.