WITH FRESH EYES: Winner of the ECPA Christian Book Award and the Selah Award. Get your copy here.
Home / Bible Study / Mansions and Heavenly Homes: There’s Room For You

Jesus’ mention of mansions in Heaven never did much for me.

The King James Version of the Bible translates John 14:2 this way:

“In my Father’s house are many mansions: if it were not so, I would have told you. I go to prepare a place for you.”

The songwriter, Ira Stanphill, grabbed onto that imagery in his song made popular by Elvis Presley, “Mansion Over The Hilltop.” Maybe this is what ruined Jesus’ picture of Heaven for me.

“I’m satisfied with just a cottage below
A little silver and a little gold
But in that city, where the ransomed will shine
I want a gold one, that’s silver lined.

I’ve got a mansion just over the hilltop
In that bright land where we’ll never grow old
And someday yonder, we’ll never more wander
But walk on streets that are purest gold.”

It sounds so . . . materialistic. shouldn’t we, uh, look forward to spending eternity with Jesus rather than what kind of house we are going to get?  What would I want with a mansion anyway? All that housecleaning! Or maybe that’s part of Heaven’s package deal. No housecleaning needed. You might rope me in there. But still . . .

A speaker at a women’s retreat must have shared my angst over heavenly mansions. She liked newer translations that substituted rooms for mansions.

“What do we need a mansion for?” she asked. “We won’t need bathrooms.” Well, frankly, to tell you the truth, I had not stopped to think about that particular aspect of the afterlife. “We won’t need a bedroom because we won’t need sleep.” Good point. “And we won’t need kitchens or dining rooms because we’ll be feasting at the table of the Bridegroom.” Another good point. “We’ll all need just one room. And God has a room just for you.”

Her explanation seemed valid and closer to the truth. It still left me discontent. Now it sounded like solitary confinement to me.

Jesus often used tangible imagery to express spiritual truths to his listeners. He didn’t intend for us to take those images literally. In his use of the word mansion or rooms or whatever they were, could he be getting at a bigger spiritual truth?

Then I read John 14:2 from the New Living Translation:

“There is more than enough room in my Father’s home. If this were not so, would I have told you that I am going to prepare a place for you?”

That’s it! The translator caught the context of what Jesus was saying. Why would Jesus tell his disciples He was going to prepare a place for them if there wasn’t room? It’s not a physical description; it’s a spiritual lesson. God’s grace and forgiveness is expansive enough for everyone.

Jesus’ promise gets better. In the opening verses of John 14, Jesus moves his disciples’ thinking from the temporal to the eternal, the earthly zone to the heavenly realm. He is the bridge to God. God’s plan is not just to rescue Israel from the Romans or to invoke world peace. Through Jesus, God unveils His plan to bring man back to Himself. Jesus is preparing a place where we can always be where He is.

We won’t need to stand far off from a curtained Holy of Holies. No more will our sin separate us from the presence of God. There’s room. Plenty of room for everyone who trusts in God and His Son, Jesus.

I used to have such low self-worth, I figured Jesus would be duty bound to let me into His Heaven because I had claimed His name. However, He would relegate me to the corner with the other Inferiors while the Beautiful People sat in His inner circle praising Him for all eternity.

There are no corners in Heaven. There’s room for everyone. That’s what Jesus promised.

Ira Stanphill caught that idea in another of his hymns, “Room at the Cross for You.”

“The cross upon which Jesus died 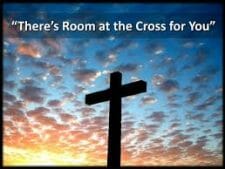 Is a shelter in which we can hide
And its grace so free is sufficient for me
And deep is its fountain as wide as the sea.

Heaven has no quotas. No one is inferior or too far down. The ground is level at the foot of the cross. God’s grace is free and sufficient for even me—and you.

There’s room at the cross for you.

Previous Post: « Word Power: Keeping Yourself From Saying What You Don’t Want To Say
Next Post: Cinnamon Chip Scones: When You Need An Excuse To Get Together With Friends »