WITH FRESH EYES: Winner of the ECPA Christian Book Award and the Selah Award. Get your copy here.
Home / Grace on Parade / Rainbow Watch

Did you see the rainbow? It was awesome! 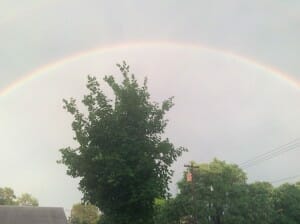 Sunday evening, June 7, several bands of storms raced over the flat prairie land of western and central Illinois. At one point, red cells dotted the main highway between the Iowa border and Peoria along Highway 116 like race cars along a super highway. Three different thunderstorm warning notices appeared in my email, forecasting damaging winds and large hail. While nothing was said about tornadic activity, I thought I saw a funnel cloud and a friend said a lot of debris flew past their house and they noted rotation in the clouds. 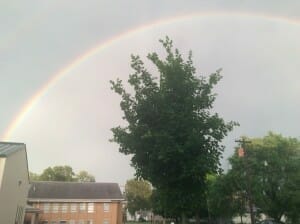 Personally it was an intense four hours. My daughter was moving that day. My husband had gone to Champaign to load up the last of her possessions and drive her back to western Illinois. Their route took them straight into the oncoming storms. Three times they drove through rain bands so thick, they could hardly see the road in front of them. We were in constant text contact as I kept them appraised of the latest weather updates. At one point, I wondered if I should tell them to stop and wait out the storms, but from the looks of the line and directions of the storms, they would be waiting a mighty long time. I called one of our long-time residents and seasoned farmers. “Tell them to just keep coming, use common sense, and stop if they have to,” he advised.

Finally, just as the last onslaught of torrential rain let up, they arrived home. It had been hard travel but they never had any problems. Thanks be to God. After feeding them supper, I let the dog out, noting that the cloud cover was moving to the east, allowing the lowering sun to fill the evening sky with a bright glow. My daughter went out to enjoy the sunshine but raced back in.

My husband and I grabbed cameras and tore out behind her. I ignored my protesting injured ankle and soaked sock. The most intense full, double rainbow I have ever seen filled the eastern sky. We shot picture after picture, frustrated that we couldn’t get the entire rainbow in the viewfinder (why didn’t I do a video?) or catch the vibrant colors. Cars slowed and drivers hollered, “Beautiful, isn’t it?’ I’m so glad the Spirit translates our poor pathetic words to the Father, for all we could utter over and over was “Wow!” Our smiles told God the secrets of our hearts. We celebrated along with Him that the storms were over, we were safe, and our land was nourished by the refreshing rains.

It was as if God was speaking. “Ok, all done now. Storms over. I’m still taking care of you.” 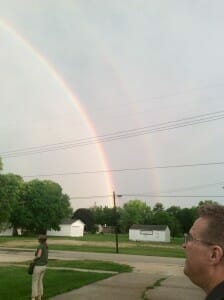 As my eyes stayed glued to the spectacular sight, I thought of God’s promise to Noah that He would never flood the entire earth again. Every time God sets His rainbow in the sky, He reminds us of that promise He made so long ago and He reminds us that He has done a very good job of keeping that promise. Our celebration of joy in our driveway praised Him for the beauty of His creation and His faithfulness in keeping His promises.

God has made many other promises. Every time I see a rainbow, I can remember that not only has He been faithful to not flood the earth, He has also been faithful to do everything else He has promised to do – supply all my needs, stay with me, help me, guide me, feed me, protect me from evil, answer me when I cry out to Him, send a Savior to take the punishment for my sins, forgive my sin, transform my life, and prepare a place for me to go to when I cast off this earthly body. He’s kept every one of His promises so far; I can trust Him that He will keep the rest.

As soon as we went back into the house, we posted our pictures on Facebook. To my surprise and delight, at least six other area friends also posted rainbow pictures. How very cool! It’s one thing to celebrate and worship God for His creation and faithfulness on my own It’s quite another, so satisfying in fact, to find out that a lot of other people dropped what they were doing, grabbed their cameras, smart phones and tablets, and did the same thing we did.