WITH FRESH EYES: Winner of the ECPA Christian Book Award and the Selah Award. Get your copy here.
Home / Grace on Parade / Roseville Christian Church: A Shelter In the Time of Storm

The members of the Roseville Christian Church never anticipated that Sunday morning how God planned to use them in the midst of Winter Storm Bruce. Or of the national attention for what they did.

At 8:33 p.m. on November 25, 2018, Jeremy Wise, Roseville, Illinois Fire Chief called Jack Wingate, pastor of the Roseville Christian Church who also happens to be my husband. Winter Storm Bruce had already stirred up winds gusting to 45 miles per hour and dumped several inches of snow over the last three hours. Not knowing where else to go, the fire department had brought several stranded motorists to Casey’s, our local convenience store. Could they use the Roseville Christian Church as a shelter? 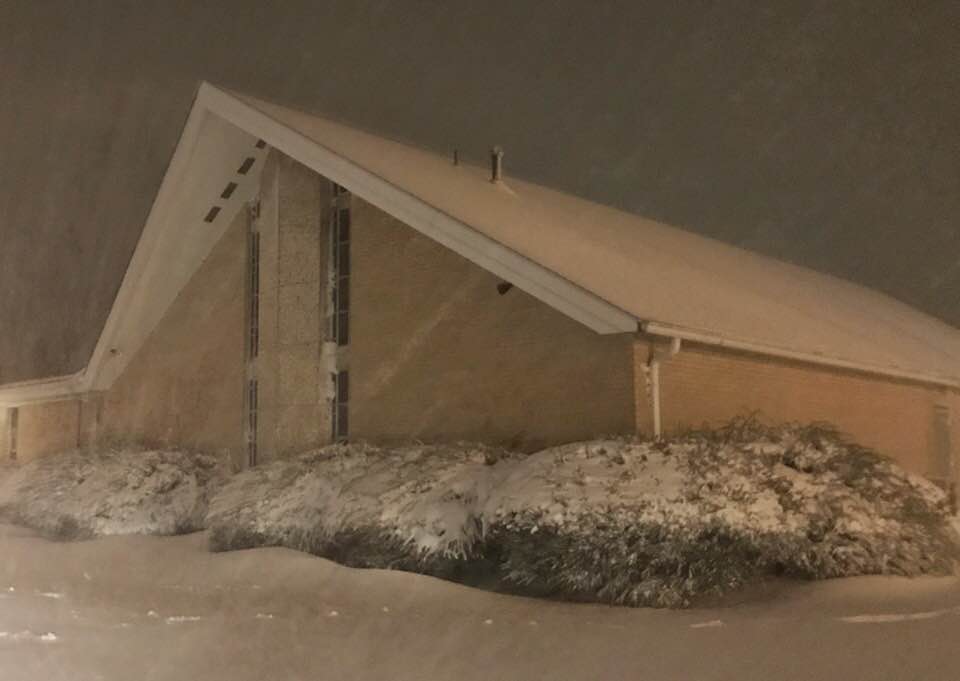 “Of course,” Jack said. It was an agreement he had made with the fire department several years ago after the blizzard of 2012 when over 100 stranded motorists spent the day on the cement floor of the Fire Department. It was one of those agreements you never know whether it will be acted upon. The time had come. The need was desperate.

“Put an announcement on the church’s Facebook page that the church is available as a shelter,” Jack told me as he walked out the door. “And ask for assistance.”

I wasn’t being helpful. But I knew the strength of the storm. Other than tow trucks and courageous fire rescue personnel, no one was venturing out in this violent storm. Soon, Public Safety ordered tow trucks off the road as well. To our great surprise,  people passed along our Facebook message. 230 Facebook users shared the church post that we had opened our doors to be used as an emergency shelter.

And then we started to receive the best help of all.

Over the next ten hours, 65 adults, three children, and six dogs filled the church facility. A large group were students from Western Illinois University, en route from Thanksgiving break with their families, now within 30 miles of reaching the campus. Others had come as far as New York. Soon strangers we never had met spread throughout the church, sleeping on pews and sitting around tables in the gym. For twenty hours, we sheltered cold, hungry, anxious people, some who had sat in their cars for more than four hours before rescue teams reached them.

How did the Roseville Christian Church prepare for the storm?

We didn’t. We had no contingency plan. Yet all 68 people were warm, comfortable and offered more food than they could eat, and everyone made it home safely.

We realized that any contingency plan could never outdo God.

How did we do it? How did God do it through us?

Over the last few months, God infiltrated our mundane decisions. He knew the storm was coming and had us prepared.

In addition to the food and blankets already at the church, people braved the storm to bring more supplies.

No need to worry about help in providing for those 68 people. The group worked together to meet each other’s needs.

The best example of God’s people coming together revealed itself several days after the storm. Jack and I became overwhelmed with the response from a watching community and world. People heard about the blizzard, saw our updates on Facebook, and hit the share button. A newspaper called us and wanted an interview. Grateful motorists whom we had served posted thank you notes. Their stories went viral.

Busy those first two days then tired from a lack of sleep, I finally started to read through all the notes. Embedded within those notes were people asking others to pray for those caught in the blizzard, and Jack and me in particular as we started to serve those in need.

My own sister told how she couldn’t sleep that night, decided God had her up for a reason, and started to pray, knowing the blizzard was hitting our area particularly hard. She wrote on Facebook, “I prayed that every person who needed help would receive it.” Then she learned how God used us and our church facility to shelter those in need. I don’t think she realized at the time that God would use her sister to answer her prayer. Others shared my updates about the blizzard and rescue operations, commenting that they were praying. They had no clue what God was doing. I hope this post shows you the great extent God was answering your prayers!

People have called Jack and me heroes, saints, and angels with the gift of hospitality.

We beg to differ. This whole thing was so of God. He orchestrated the rescue and relief efforts and brought people from all walks of life to spend a few hours together learning how to take care of each other. The Lord showed us that He knows what is happening in our lives and He will take care of us, using many people to make it happen. God may have used us to bless others, but I am beyond confident that we were blessed beyond measure as we got to witness His provision and protection up close and personal.

During #winterstormbruce, God brought people from all walks of life to spend a few hours together learning how to take care of each other.

He knew Winter Storm Bruce was coming and he met our needs and the needs of the travelers – every single one. Then He used the story to splash His glory all over the nation as people heard what had happened in little out-of-the-way Roseville, Illinois. He truly is a Shelter in the time of storm.

Tell us your blizzard stories. How have you seen God provide for you and protect you? How has God used you and your community to rescue those in need?

Previous Post: « How To Play UNO with a Deaf Person
Next Post: God In The Fog: Four Ways You Can Persevere »