Celebrate with me and Kathy Rouser on the release of her historical novel, Rumors and Promises! 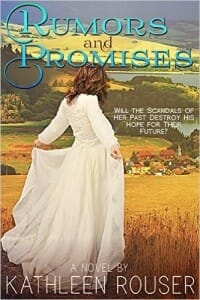 Kathy Rouser, another writing friend, met her dream-come-true this past week as her first novel, Rumors and Promises debuted April 18, 2016.. It’s been a flurry of activity for Kathy in the first week but she finally had a chance to sit down with me over that ever-present cup of cyber-hot-beverage and tell me a bit about her new book.

While I was waiting, I read Rumors and Promises. I was struck with Kathy’s ability to handle what is still a tender topic—sexual assault—with delicacy, dignity, grace, and humility. The tender, compassionate, caring-about-others godly nature of the author shines through her characters. Kathy is another one who holds close to her heart the ministry of prayer. I value her prayers, her concern for others, and her understanding of grace passed forward.

Kathy, tell us about Rumors and Promises.  What is the setting and time frame?

Rumors and Promises is set in a small fictional mid-western town in Michigan. The year is 1900 and it starts in the late winter and ends in early fall. Much of it centers around Fairgrave’s Boardinghouse, the parsonage and Stone Creek Community Church.

Tell us a little more about the main character. How does she struggle with her faith in God?

Sophie Biddle feels she’s been abandoned by God and her family. Her little daughter, Caira, is the product of sexual assault, but she feels responsible for her daughter and doesn’t want to marry the monster who attacked her. If only her parents, especially her father, would understand and believer her.

Sophie has been raised as a Christian and feels guilty about her ruse that her daughter is her little sister. Yet she believes she must carry it out for them to start over in Stone Creek. Rumors and Promises is about a journey of finding faith and truth again in the midst of difficult situations.

My audience often wonders where writers get their ideas for the stories they write. What inspired you to write Rumors and Promises?

Sophie Biddle’s story in Rumors and Promises really began as an attempt to convey a story similar to the account of the woman at the well in Chapter four of the Gospel of John. At the time editors weren’t interested in biblical fiction. But I was also constrained by the guidelines of Christian publishing. How could I have my protagonist be a woman of bad reputation while preserving her purity? The character of Sophia Bidershem, an heiress concealing her identity with a slightly different name and trying to pass off her toddler daughter as her sister, was born. The out-of-wedlock-pregnancy had not come about by her volition, but she loves her child anyway, and does what she must to take care of her.

Then I thought about who had the most to lose in becoming involved in the life of these runaway girls, just as the disciples became shocked Jesus would associate with the Samaritan woman. Pastor Ian McCormick would have much to lose if his reputation was besmirched by friendship with a “fallen woman.” Of course that’s where the similarities end. Jesus is sinless while Ian is a flawed man trying to start over with a new congregation because of past failings.

What begins as ministry to a poor girl and her little sister turns into a deeper relationship than either of Sophie or Ian bargained for. Doubts about little Caira being her sister cause tongues to wag in Stone Creek and they are eventually faced with a dilemma about whether or not to confess the truth. Jesus spoke to the Samaritan woman compassionately, but He also helped her face the truth of her sin, so that He could become living water to her.

Rumors and Promises is a story close to my heart in that it shows a mother’s love and sacrifice. I also hope it exemplifies the power of God to make blessings out of the difficult things in life along with His ability to heal and renew.

Sophie’s friend, Gloria Myles, ha lost her daughter and son-in-law in a terrible accident. She cares for her only granddaughter, Elise, a little girl who has withdrawn quite a bit. Gloria leans on God daily and is always looking for ways to draw Elise out. Sophie becomes instrumental in this through the ministry of music.

Without giving any spoilers, tell us about a time when your characters reflect God’s grace and mercy to each other.

An interesting friendship sprouts up between Sophie and the niece of her antagonist. Both girls sense the pain in the other and learn to support one another.

Tell us more, Kathy, about you. Other than writing, how do you believe God has gifted you and how has he used your gifts to serve Him and His Kingdom? 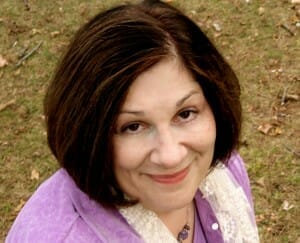 In addition to being a wife and a mother, so much of my time has been focused on writing. When I’ve tried to expand to other careers, the Lord seems to keep pointing me back to this. However, there are some other ways I enjoy ministering to others. I have spent some time teaching children in Community Bible Study. Sharing the truth with these young kids, trying to bring God’s word to life in a meaningful way to them was a wonderful experience and I hope I get to do that again.

I also like to make jewelry. Often I have prayed over each project and asked the Lord to lead me to just the right beads, stone, and/or design especially for the recipient. I want the gifts to be special. When I see the joy in their eyes as they open their gifts, I am so pleased to give people this pleasure.

Prayer is also important to me. I’m not the get down on my knees every morning or fast all the time kind of pray-er, but it is an almost constant conversation I have with the Lord, praying about almost everything it seems. It’s something I can do–sending up that request when I know someone has a need.

Tell us about a time God has shown you His mercy or about a time He used someone to “pass grace forward” to you.

It’s hard to pin it down to one instance since He shows His mercy and grace every day. My shortcoming is not always seeing it! He is so good, from getting us through tough times in our marriage to God’s people rallying around us when Jack had a catastrophic accident in 1999.

I can tell you that when I was expecting my oldest child, the Lord spoke to me through a radio ministry, so that I finally realized that it wasn’t about me and if I was “good enough,” but that Jesus’ sacrifice on the cross was enough to take away my sins. When I heard that the Father kept His children in the palm of His hand and no one can take them out, a spiritual “light” went on. I realized my salvation was completely dependent on Jesus, not on anything I could do. He pulled me from the grip of Satan that day and my life has never been the same since.

Kathy, how can we get a copy of Rumors and Promises?

I hope you will get a copy of Rumors and Promises. The historical setting is delightful and even if you aren’t a big fan of romance, it’s a sweet story that will have you trying to figure out what will happen next.

About Kathleen: Kathleen Rouser has loved making up stories since she was a little girl and wanted to be a writer before she could even read. She desires to create characters who resonate with readers and realize the need for a transforming Savior in their everyday lives. She is a long time member in good standing of ACFW and a former board member of its Great Lakes Chapter. Kathleen has been published in anthologies, including the Amazon bestseller, Christmas Treasures, as well as in both print and online magazines. Her first full-length novel, Rumors and Promises, was published by Heritage Beacon Fiction in April, 2016.

Previously a home-school mom of three, she has more recently been a college student and then a mild-mannered dental assistant for a time. Along with her sassy tail-less cat, she lives in Michigan with her hero and husband of 34 years, who not only listens to her stories, but also cooks for her.

Book blurb: Sophie Biddle is an heiress on the run. Worse, she has a two-year-old child in tow, an illegitimate daughter she tries to pass off as her little sister. Believing herself abandoned by family and God, Sophie is caught off guard when she meets a kind, but meddling and handsome minister at the local mercantile. Despite her dire straits, Sophie wants only acceptance—not special treatment from the reverend of anyone else.

Reverend Ian McCormick is determined to start anew in Stone Creek, Michigan, believing he has failed God and his former flock. He works harder than ever to forget his mistake, hoping to prove himself a pleasing servant to his new congregation and once again to God.

In spite of their attempts to stay romantically untangled, Sophie and Ian find themselves drawn closer through their mutual love of music and their love for the child, Caira. When rumors of her “scandalous” past surface, Ian must decide whether to stand by the lovely Sophie’s side, while Sophie must decide whether to confess the ruse she thought necessary. Will they accept God’s forgiveness and risk forging a future together? Or will they continue to go it alone?

Rumors and Promises is available at: Amazon.com – https://tinyurl.com/jqmw93e