WITH FRESH EYES: Winner of the ECPA Christian Book Award and the Selah Award. Get your copy here.
Home / Grace on Parade / What’s Your Superpower?

“I’m a Writer. What’s Your Super-power?” 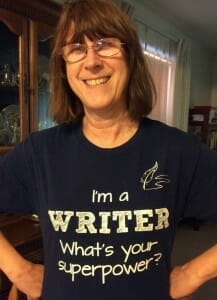 I love the whimsy of the t-shirt my husband bought for me from an Internet site. But truth be told, I’ve been a little embarrassed to wear it in public. There’s just a bit of—impudence? Sassiness? Arrogance? As the minister’s wife in a small community, I wasn’t sure I could get away with that kind of chutzpah.

So I took my t-shirt to Tucson where we recently enjoyed an extended family visit in the days surrounding my uncle’s celebration of life service and where no one but family would roll their eyes at my claim to fame. The Monday morning before we all left, the family loaded up in two cars and traipsed across the busy highway from the hotel to an eclectic curio shop that reminded me of a southwest themed Pier One store. It was a casual day so I donned my t-shirt and a pair of jeans thinking I could get away with my messaged t-shirt.

As I passed a glass case of turquoise jewelry, the clerk peered over her cash register. “What does your shirt say?”

My cheeks got that taunt, warm feeling you get when you think you’re blushing, but I stood straighter for her to read. How was I going to get out of this one?

“Writer, huh? I don’t know what my super-power is.”

The words poured out before I could be appalled at my brazenness. “I love my job as a writer. I’ve found there is power in the pen, power to influence lives and make a difference. I have the privilege to rub shoulders with awesome people, then tell their stories.”

In for a penny, in for a pound. I described my several articles about the organization, One Family, One Purpose that rebuilds homes shredded by tornadoes and how one article was the catalyst in giving One Family, One Purpose credibility in their fundraising efforts. God’s timing was perfect, for my story appeared just as the crew arrived in an Iowa community to rebuild a home, giving them the local publicity they needed to catapult the community into interest and support.

“And then there was Destiny.” Destiny was an isolated eleven-year-old deaf girl I met through the Deaf Institute in Cincinnati, Ohio who coped with her craving for social interaction by handing out note cards to public library patrons that read, “May I teach you sign language?”

“That story became the lead article in a national children’s magazine. It became this lower class child’s fifteen minutes of fame and gave her a shot of confidence about life she had not experienced before.”

The clerk shook her head. “Wow!” was all she could say.

I bet she went home, still shaking her head at her crazy customers. She probably told the story of this full-of-herself, overly enthusiastic customer who used a t-shirt as a conversation starter to brag about her accomplishments. I hope she didn’t see it that way. I hope she saw that what we do and how we use our God-given gifts can make a difference in the world and in the lives we influence.

Several passages in the New Testament talk about the concept of spiritual gifts. I’m not a theologian, but to me, our natural God-given abilities become spiritual gifts when God brings about results that can only happen through Him. 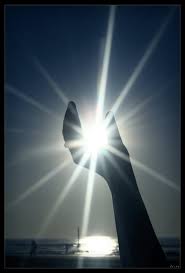 I suspect if Paul had lived in the 21st century, he would have called spiritual gifts super-powers. You see, I didn’t cause an Iowa community to pay attention to my story. I didn’t arrange for my story to land in their hands at a crucial moment. I didn’t plan for my story about an unknown deaf girl to be a lead story, nor did I know Destiny’s family and ethnic background when I chose to interview her. I didn’t expect that my connection with her would further draw her into a loving Christian deaf community that would nurture and encourage her.

I just wrote the story. God did the rest.

It was a super-power because the results of my actions came about only through His almighty power. My part was to do the best I could do, use my gift for His agenda, not my own, and relinquish the results and the credit to Him.

Now to him who by the power at work within us is able to do far more abundantly than all that we ask or think, to him be glory in the church and in Christ Jesus to all generations, for ever and ever. Amen. (RSV)

So. I’m a writer. What’s your super-power?

How has the Lord used your natural God-given ability to do great and awesome things beyond your ability and your control?

Sorry to disagree with you, nice clerk at the curio shop. Everyone does have a super-power. God is waiting for each of us to find it and use it for Him so He can do great things beyond anything you can possibly imagine.