WITH FRESH EYES: Winner of the ECPA Christian Book Award and the Selah Award. Get your copy here.
Home / Grace on Parade / Sacrifice of a Son: The Ultimate Love Gift

Easter 2017. I’m still celebrating and rejoicing over the culmination of God’s plan to sacrifice His

Son on my behalf.

As I mentioned in a previous post, I don’t come from a tradition that celebrates Lent. Yet my previous blog post about Lent (see here) compelled me to set aside time to meditate on Christ’s sacrifice and to participate and reflect His gift by doing good to others. As a teacher, I well know that students learn best when they participate in the learning process. In learning how to lay down my life—my time, my energy, the resources of my life—I learn a bit more of what it meant for Jesus to lay down His life (see 1 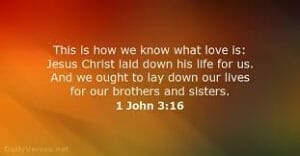 John 3:16). Doing something sacrificial engaged my brain into reflection on the death, burial, and resurrection of the Christ. Perhaps that is why Lent is so important to many Christians.

Here’s what I did. Easter is a busy time in our household but I rearranged my schedule so I could make Easter baskets for six elderly people in our community, filling each basket with dyed Easter eggs and homemade hot cross buns. I took the extra bread to several neighbors. As I grew more and more tired in finishing my project the morning of Good Friday, I kept reminding myself of what Jesus went through that day of His death.

It’s easy in non-Lenten traditions to acknowledge Palm Sunday and Easter. Those are happy holidays. Preachers preach happy sermons about Jesus the King and Jesus the Risen Lord. Evangelicals, to our shame, tend to gloss over the events between those two bookends at Easter time. For all of us, especially those of us who have been raised in the church, it’s tempting to have nothing more than a head knowledge about Jesus’ resurrection. We mouth the words but the impact of what Jesus did doesn’t sink into our emotions in a way that we connect personally with it. As I sat in our community’s Good Friday service after my busy day of bread baking, egg dying, and Easter basket delivery, my brain connected with the truth of Jesus’ sacrifice in a new way. May I share with you my “Ah ha” moment?

It’s this. So simple, yet so profound.

God gave His Son. The only Son He had.

Read those words again. Think about what I’m saying. God gave His son.

God allowed His Son to suffer and then to die for the crimes of humanity. He permitted His child to suffer the worst kind of death so He could demonstrate the deepest kind of love.

No wonder God is personified in the male gender. Any woman would be hard pressed to give up her child for the sake of rescuing the life of an evil person. Mama Bear instincts kick in whenever anyone gets close to our kids. I’d rather die myself than to watch my child die for any reason: good, bad, unnecessary or necessary.

I’d gladly sacrifice myself for my child, my mother, or my husband. The lines moves into the gray zone after that. There are limits to my generosity. I might give up my life for a friend. Once, I was willing to give one of my kidneys to a young godly woman who had her entire life and legacy ahead of her. I knew she would use that kidney well. At the time, I had to ask myself, would I have done it for someone who wouldn’t? What if she wasn’t such a nice lady? What if she had hurt me in some way? What if she had lost her original kidney from immoral life choices and there was no evidence that she was going to change her ways once she got hold of my kidney?

How willing would I be to sacrifice for an enemy? Someone who had treated me badly? Lied to me, stolen from me, put their own self-interests above my own even to the point of harm? There’s been times I could barely take a gift of food to someone who had demeaned me in the past. Yet God did it for an entire world of people who had done far worse to him than a one-time smear.

It’s deeper than that. It’s not just sacrificing His own life. He gave His son. Sacrificing my own life for another is one thing. Sacrificing my child is beyond my comprehension. I’d sacrifice for my child; not sacrifice my child. That is exactly what God was willing to do. 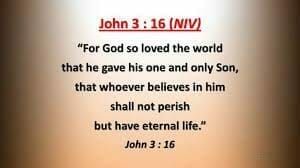 God gave Jesus. His Son. His only Son. His nice, no, His perfect Son. For mean ornery, evil-infested people. Like me.

Perhaps that’s why the Bible expresses the Godhead in terms of a child-parent relationship. So eager to show us the extent of His love, God doesn’t merely say He gave a piece of Himself. He gave His child. He only child.

He gave more than Himself. He gave His child. For me. For my sin.

Abraham was willing to sacrifice his only son, Isaac, just because God told him to and he trusted that God would keep his promises. I wonder if he ever told Sarah what he was going to do. If I were a betting woman, I’d bet my bank account he didn’t. She couldn’t take it. She’s a mom.

What if God upped the ante? What if God had asked Abraham to sacrifice Isaac so the Canaanites and Egyptians could have access to God’s kingdom plans and be a part of Israel’s heritage? Now wait a minute, Lord.

That’s what God did when He sent His Son, His only Son, to die for the despicable among us. We’re all despicable—Republican, Democrat, poor, wealthy, up and outers, and moral reprobates. All of us have blown it and separated ourselves from the healthy relationship God wants to have with us.

Jesus became the whipping boy for corrupted, twisted people who had no shame about mocking and torturing criminals who deserved the worst of punishments. Executing felons is one matter. Do what needs to be done. But beating them to a pulp within an inch of their lives then hanging them on a post with a crossbar that makes it impossible to die quickly? Pardon the pun, but isn’t that a bit of overkill? On top of that, the military and the government didn’t seem overly concerned with what the person had done. Hate, distrust, prejudice, and a lack of sensitivity about human suffering seemed more in vogue than justice. How degenerate can men get?

Perhaps Jesus allowed himself to be tortured to demonstrate how horribly the sin problem on Planet Earth had spiraled out of control.

God allowed His Son to suffer all that earth could throw at Him so He could deliver me from my sin-bondage and sin-sickness. For all the times I’ve put myself ahead of him and others, the times I’ve spit in His face by flagrantly following my own rulebook instead of His, and for all the times I’ve treated the rest of his creation like I’m better than them. Talk about not fair. It wasn’t fair for Jesus to suffer for things He didn’t do. It wasn’t fair that God had to sacrifice His own child in order to rescue me.

But He did. Because He and the Father loved me and wanted me back.

Previous Post: « Church Conflict: Seven Ways To Diffuse The Bomb
Next Post: Angels and Guardian Angels: Are They For Real? »