WITH FRESH EYES: Winner of the ECPA Christian Book Award and the Selah Award. Get your copy here.
Home / Grace on Parade / Grace Actions: Six Things Grace Can Do For You

What is grace doing in your life?

Grace is a word that has come to mean many things in our English language, definitions that distract from the core of its content rich meaning. 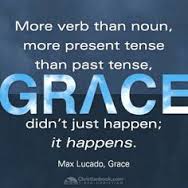 Even to church goers, the word grace has become as common as communion cups. We’ve relegated it to a gift from God, an undeserved gift no less. We’ve come to accept a wimpy kind of grace, Max Lucado says in his book, Grace: More Than We Deserve, Greater Than We Imagine. A one-act gift, Karen Wingate says.

We often think of grace as the fulfillment of God’s plan to remedy the problem of sin as expressed by Christ’s death on the cross. This is true. This is very true. None of us deserve to have someone divine die in our sin-infested place. But grace doesn’t stop there. Christ’s death and resurrection blasted open the door to what grace can do that living under an outward code of law could not do. Yes, it ultimately will bring you to heaven forever with your Lord. But grace has a lot of work to do within you before you reach Heaven’s gates.

I’ve compiled a list of six things that grace can do for you.

Grace forgives you. Are you encumbered with guilt of past sin? Afraid you can’t forget? Afraid others won’t forget? According to Jesus, it’s over. He has removed your sin from you as far as the east is from the west, and that’s an awfully long way. Ephesians 1:7 says, “In him we have redemption through his blood, the forgiveness of sins, in accordance with the riches of God’s grace (NIV).”

Now this isn’t a kind of forgiveness that just lets you off the hook.  God doesn’t just wave you away, saying, “Aww, forget about it.” His justice must be satisfied.  A price has to be paid. If you stole $20 from me and lost it, if I said I forgive you, don’t worry about the $20, someone is still out that twenty bucks, mainly me.  Jesus paid the price.  He forgave you by standing in your place.  That’s the idea behind 1 Jn 2:1 when John calls Jesus our Advocate.

Grace blesses you. Jesus could have just died on the cross, rose from the dead, prepared heaven, and called it good. Instead, in his lavish love and mercy for us, He gives us so much every day that, let’s be honest, we do not deserve. Not one bit. We’re sinners, remember? Every one of us. We’ve rejected Him. We’ve tried to take life in our own hands. Our actions have told Him to His face that we don’t trust Him enough to get us through this thing called life. We whine and complain about the silliest of things, things that would rival the Israelites’ complaints in the desert. Yet, every morning we awake to a new set of mercies. Romans 8:32 says, “He who did not spare his own Son, but gave him up for us all—how will he not also, along with him, graciously give us all things?”

Grace transforms you. You aren’t just forgiven. Through the process called the rest of your life, God changes you into His likeness. He gives you a new heart, a clean heart. Lucado calls this a spiritual heart transplant. I call it WOW! Ezekiel 11:19 says, “I will give them an undivided heart and put a new spirit in them; I will remove from them their heart of stone and give them a heart of flesh.” Do you know someone whose life radically turned around when they became a Christian? Point proven. That’s what grace does.

Grace indwells you. This is the one that I have a tough time wrapping my brain around. To me, it’s amazing that He blesses me, wants to walk with me, and is crazy in love with me. Beyond that, He chooses to live within me through His Spirit. Some believe this indwelling of the Holy Spirit gives them the power and freedom to worship God at a new level. Forgive me, but that is oh so pea-sized limiting. God’s partnership with us is so much more.

Because grace indwells within me, I don’t have to do this thing called the sanctified life on my own. God isn’t just helping me live righteously; He’s doing it through me. Paul said in Galatians 2:20, “Not I but Christ who lives within me.” Lucado says, “God expects us to change then gives us the power to pull it off.”

Why did God choose to do it that way? His glory shines through the sin-cracks of my life in such a way that others see Him in me and are drawn to His grace. Anything I do for Him and because of Him is through Him, not of myself. How are we to live by grace and not by merit? Ah ha! Here it is. We live by grace because grace lives inside us.

Grace empowers you. We’re given a power that will transform our lives to represent His righteousness. We’re also empowered through grace-gifts unique to each individual that will enable us to do God-sized dreams.

When you do, the best parade in all the world will march right down the street of your life blaring His grace and glory to anyone who is watching and listening.

What has grace done for you?