WITH FRESH EYES: Winner of the ECPA Christian Book Award and the Selah Award. Get your copy here.
Home / Grace on Parade / The Grace of Past Mistakes

Life has a way of tossing presents into our path when we least expect them.

This week, I got a bouquet from Heaven.  A bouquet loaded with apple blossoms. 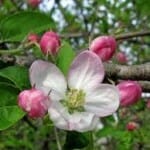 Years ago, when I was first out of graduate school and before I had children of my own, I spent two years teaching kindergarten at a Christian day care center called Apple Blossom Day Care.  All four lead teachers and the supervisor were in our mid-twenties.  Only one of us had a child.  All we had was a lot of head knowledge, a few preconceived ideas, a fistful of dreams and hearts that would grow as large as the heart of a reformed Christmas Grinch as we learned to love the children we served. In spite of the hard work and our varied backgrounds, we became friends.

As each of us left the day care to other avenues of life, we lost touch with each other. This past week, out of the blue, the five of us found each other on Facebook.  We started our own group page and have spent the week catching up on our lives, reminiscing about some of our students and remembering the more poignant and less pleasant moments.

We remembered the time our supervisor scraped the peanut butter off a sandwich to prove to the caterer that he was not putting the two tablespoons of peanut butter on each sandwich as prescribed by state law.  There was the summer of the seventeen year cycle cicadas when it was all we could do to herd the squeamish children outside to play without cramming our own fists into our ears to stifle the screams from the cicadas.  One teacher admitted she didn’t make her class eat the carrot salad served at lunch because she couldn’t stand it herself.  I told the story of how one five year old who, even though he could hardly count to ten, put together our newly delivered Little Tots Play Kitchen for me.   Then there was the little girl that stuck a bean up her nose.  Half way to the emergency room, she sneezed it out. Whew!  She was so calm and nonchalant about the whole thing too.

I look back at those two years with much fondness.  Sure there were frustrations. We chafed under restrictions pushed on us by the state, the owner, the caterer and the expectations of the parents.  We tried to cope with children from dysfunctional families, tried to love them even on the days when we didn’t feel so lovable ourselves.  We admitted to each other that there were so many things we wished we could do over again.  I wish I’d been more patient, more loving, less critical, more organized. I wish I’d seen it more as a ministry and less as a job.

But I like what our former supervisor said to our group last night. “There were some things I wish I’d done differently and some I thought I handled well. But we were young and inexperienced and God’s grace covers a multitude of flubs.”

I’m so thankful God’s grace covers a “multitude of flubs.”

God doesn’t give up on me in the youth of my life experience. Instead, He gives second and third and ninetieth chances to try again in this thing called ministry.  He has such a wonderful way of taking my measly, pitiful efforts, sprinkling them with His grace and glory and building His Kingdom through me and in spite of me.

I hope I can have at least a smidgeon of that same patience with those who come behind me in ministry. When I am able to display God’s grace to the young and inexperienced, I’m spreading the fragrance of God’s grace a little further. If I take a long slow breath, I think it smells like apple blossoms.