WITH FRESH EYES: Winner of the ECPA Christian Book Award and the Selah Award. Get your copy here.
Home / Grace on Parade / The Ministry of the Love Loaf

Pantano Christian Church, the church I attended as a child and teenager, will soon celebrate its fiftieth anniversary.  It has been such a thrill to watch the Lord grow this church from its humble beginnings in a small house tucked into a cul-de-sac of a neighborhood to the large campus that serves thousands of people today.

I was a preschooler at the time, but I remember the “house church.”  I remember squirming on red painted oak preschool sized chairs as Mrs. Anderson, Mrs. Hemphill or my mother taught us those Bible stories of creation and Jesus’ love that stick in your brain for a life time.  I remember Mrs. Keeling who, when she didn’t know how to pronounce the name “Esau,” told us she would ask one of the elders the correct pronunciation, then she turned the dilemma into a teachable moment by telling us, “Whenever you have a Bible question, you can go to one of the church elders and they will help you.  That is their job to help us understand our Bible.”

When I was seven, the congregation moved to a modest building made up of an auditorium with a multi-purpose area in the back that served as a fellowship hall, adult classroom and overflow, a nursery, a kitchen, and two offices that doubled for children’s classrooms.  Four years later, we were building a new classroom annex behind the main building.  I still remember vividly the day a freak storm sucked off half of the auditorium roof and how all sixty members gathered together to sop up the mess.  The crisis brought us together and united us as a family.

The church maintained an attendance of around 100 members for about ten years.  It was a troubled time, a time during the sixties and seventies when our angst mirrored the restlessness of a nation caught in the crossfire of culture wars.  It was at the height of the Jesus movement and the charismatic movement, a time when people sought to break the bonds of traditionalism and meaningless cardboard religion.  Those seeking to find a relevant Christianity were treated with skepticism by older folks who feared we would leave the tenets of Scripture.  Our little church stressed to the point of splitting, but somehow stayed intact.  After that troubled time, I, as an older teen and college student, watched my beloved congregation sink into apathy.

Then, six months before I left the state for graduate school, we hired a new minister and we suddenly shot forward in explosive growth. Was it our new minister, who had a passion for evangelism?  Strong leaders who had both business savvy and spiritual discernment?  A congregation who grew tired of the way they were and wanted to be something different?

I have another theory.  It was the love loaf that did it. 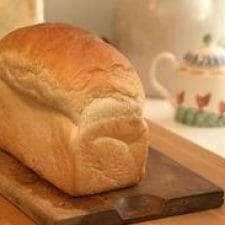 I don’t even know whose idea it was.  It doesn’t matter.  We were so excited about the new people Dick Osness was persuading to come to our church. But we didn’t want them to come once then never come again.  How could we show them we were glad they came and we cared about them?

Several women decided to start the love loaf ministry.  Each Monday, a volunteer would confer with a church secretary to get names and addresses of visitors.  Some ladies would make homemade bread.  The same ladies or others would immediately take that bread to the visitor’s home. It didn’t matter if they lived around the corner or across town. They still got a loaf of homemade bread delivered to their doorstep.  The delivery person didn’t have to stay or say anything; all they had to do was deliver the bread.  At some point, I believe a card was attached to the loaf that said who it was from.  If the person was not at home, the bread was left on the doorstep.

It was a hit!  People would tell us later they had experience a rough day at work, then they came home to find this still warm loaf of bread on their doorstep.  Visitors came once out of curiosity.  They returned because that loaf of bread communicated, this church cares about you. The fact that people would take time to make homemade yeast bread and drive miles out of their way to deliver it showed that our church valued the visitor.

Pantano Christian Church now serves over 3000 members.  It’s been years since they delivered bread. Now they sponsor other projects where members go out of their way to serve the community of Tucson, Arizona.

If we intend to spread the fragrance of Christ, we need to do it in a way that gets noticed.  That means doing what people don’t expect us to do or taking extra effort, going that extra mile in a way the rest of the world wouldn’t do.

It can be as simple as making a loaf of homemade bread.