WITH FRESH EYES: Winner of the ECPA Christian Book Award and the Selah Award. Get your copy here.
Home / Grace on Parade / Every Tithe Counts

When it comes to tithing to ministry and cross-cultural missions, every penny counts.

My husband and I have an agreement. We tithe his paycheck to our local church. I have free reign to send the tithe from my writing income to a mission or ministry of my choice as the Lord lays on my heart. Like a child who gets twenty dollars from Grandma, I bet I spend those tithe checks several times over in my mind before I actually decide who I should send it to each time.

In recent years, as I’ve ventured into fiction writing which takes many years of hard work before it begins to pay back, I haven’t had any money to give. This bothers me. I love to give to missions. I have a passion for world evangelism. I love blessing God’s people here in my own neighborhood and demonstrating Jesus’ love to those who need it. Each year my church holds a Faith Promise Rally where we pledge to give so much to World Missions in the coming year. But with no salary of my own, I have nothing to give.

Recently I received a royalty check for a short story published in an anthology. Since twelve other writers shared the pages with me, I didn’t expect much. Frankly I was surprised when my first royalty check equaled a whopping $32! As I took my check to the bank, I thought, “I need to take some out for tithe.’

And then my bubble of joy burst. 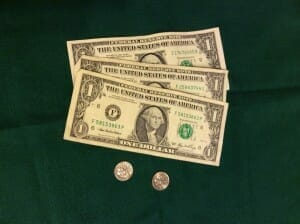 A tenth of $32 is $3.20. That’s a pitiful amount. The missions finance secretary would probably moan. Why would anyone bother giving such a small amount? Should I even bother?

Do it anyway, the Spirit’s nudge insisted. Because it’s right. My job was to be faithful in giving and let the Lord decide how my money would be used.

Instead of writing a check, I stuffed cash into an envelope. I didn’t want anyone to know I was the one who was so stingy to world missions!

It wasn’t till I got home that I realized I was guilty of comparing myself to other people. In God’s economy, $3.20 can do great things.

I’ve thought of nine things $3.20 will buy that can impact the cause for Christ. Can you add to my list?

Those are my ideas so far.

How could you impact the world for Jesus with $3.20?

No matter how the money is ultimately spent, it might be the exact amount needed to reach the monthly goal of a missions budget. It’s a known fact among Christian leaders that missions support doesn’t come from a few wealthy, generous givers; rather, it’s made up of many checks of small donations, surprisingly from widows and couples on pensions. Your little plus many other little gifts add up to make a lot.

“Bring the whole tithe into the storehouse, that there may be food in my house. Test me in this,” says the Lord Almighty, “and see if I will not throw open the floodgates of heaven and pour out so much blessing that there will not be room enough to store it.”

The whole tithe, even if it is just $3.20. Because with just a little bit, God can do marvelous things.