WITH FRESH EYES: Winner of the ECPA Christian Book Award and the Selah Award. Get your copy here.
Home / Grace on Parade / Wrestling With Grace 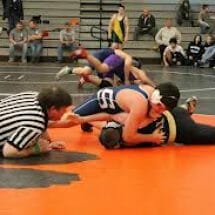 “If you go to YouTube and type in the search box – “middle school, wrestler, Jared” you will find a short video of Jared winning his first wrestling match ever. While this in itself really isn’t noteworthy, the way it was accomplished is.”

So began a wonderful Communion meditation on the idea of sacrifice that Don, one of our church leaders, shared last Sunday. Don graciously agreed to allow me to post his thoughts in this week’s Grace on Parade blog.

“You see, Jared suffers from a severe form of Cerebral Palsy and has the muscle function of a six-month old child.  The coach had to carry Jared to the middle of the mat and lay him on his back.  Now, for anyone that knows anything about wrestling, that’s not the ideal position to begin in but that, was the only option available.

“While this is taking place, another Jr. High athlete approaches the mat from the opposite side and takes the usual upright starting position next to Jared.  The referee motions for the two wrestlers to shake hands (Jared’s opponent has to lean over and take Jared’s hand in order to shake it), the whistle is blown and the match begins.  For a few seconds, Jared’s opponent moves from side to side making it look as realistic as possible and then acts as if he slips on the mat and ends up lying next to him.  He then takes Jared’s arm and pulls Jared’s body across his chest.  The referee jumps down beside the two boys, slaps the mat and blows his whistle one more time.  The match is over and Jared earns his first pin.  The coach runs out, picks up Jared and carries him off the mat to the sounds of a cheering crowd. 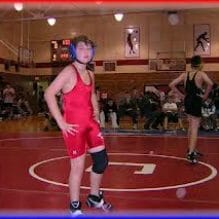 It is at this point that you need to watch the video very closely.  While all the attention is on Jared (including the camera), it is interesting to watch Jared’s opponent after the match.  He gets a little pat on the back by the referee as he walks back to his team.  A couple of his fellow wrestlers shake his hand but it appears to be more of a “sorry you lost” handshake rather than “because of what you did, you gave that kid something he’ll remember the rest of his life” handshake.  The kid finds his chair, sits down, and the film clip is over.

“It only last a little over a minute, but what a powerful minute it is.

“Where are you and I in this clip?  It would be nice to say that we are the unnamed athlete that sacrifices his own win-lose record to give something to another person that he could never get for himself.  Maybe we’re the coach that sees a person with a need and we make the necessary arrangements to fulfill that need.  I mean you know that the coach had to make a phone call or two or at least have a conversation with the other team’s coach to set this up.  That the other coach had to look at his team and ask for a volunteer to help pull this off and perform this very unselfish act.  Maybe we’re the parent that has a child that just wants to be like everyone else and because of our deep love for him or her, we ask those in charge to make allowances or we go out of our way to make that happen.  I suppose at times in our lives we can, and have, played all those roles, but not now, not at this time.

“At this time, as we meet around this communion table, we are Jared and we celebrate not because of our own victory over sin and death, but that Christ fought the battle for us and gave us the victory.  In His perfect and sinless state, he took the sins of the world past, present and future, and allowed himself to be beaten and crucified so that we could have the victory.  The question then becomes, what is our response to that?  Do we give him a pat on the back or a token handshake?  Or are we doing everything we possibly can to make sure that sacrifice was worth the price…in our lives and in the lives of those we encounter every day?”