WITH FRESH EYES: Winner of the ECPA Christian Book Award and the Selah Award. Get your copy here.
Home / Grace on Parade / A Stranger’s Welcome

Strangers meet us in all kinds of places

Intent on getting errands done in the larger city twenty five miles of where we live, my husband and I stopped at a Chinese buffet for lunch.  As we ate, I heard sniffles behind me.  I turned several times to observe an older man sitting alone at a table. At one point, I thought I saw him wipe his eyes.

It’s tough to have to eat in a restaurant by yourself.  I felt guilty for the obvious good time my husband and I were sharing together, and compassion for his solitude.  I wanted to talk to the man, to check if he was all right.

Then I began to second guess myself.  How would I approach him? What would I say? Maybe I heard wrong.  Maybe I saw wrong.  Maybe nothing was wrong.  Then again, I could be more subtle by asking if I could get anything from the buffet for him.  No, that would seem strange. It wasn’t my job.  I should just mind my own business.

My husband asked if I was ready to go.  “No, not yet,” I said, still undecided.  Finally I whispered my suspicions.  “He’s not crying,” my husband said. “He probably has allergies.  And I think he may be part of the family who works here.”  So, we got up and left. 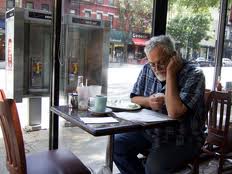 Keith Ray, president of Lincoln Christian University told a group of women at a recent Women’s Conference that he would rather trust a woman’s instinct than a man’s reason.  I tend to be too reasonable. I wish I had listened that day to my instinct. Too many times, too late, I’ve realized it wasn’t instinct at all. It was a nudge from the Holy Spirit of God who dwells within me.

I’m glad one young lady and her parents did listen to intuition. A friend of mine on Facebook shared this beautiful story.  Erica, a twelve year old girl, was in a similar situation at a Cracker Barrel restaurant.  She saw an elderly lady sitting by herself and told her parents, “I feel sorry for that lady sitting by herself.” The wise parents said, “Why don’t you go say hello?’

So Erica did.  In fact, she did more.  She pulled up a chair and started to talk, ending up spending the rest of breakfast with this stranger.

She discovered that the woman’s husband had recently died of dementia after they had shared 58 years of marriage together, that her church friends were the only family she had left, and that Cracker Barrel was actually easier to eat at alone than other restaurants.

The Best Part of the Story

When Jesus told the story of the separation of the sheep and the goats during the final Judgment, he commended those on his right by saying, “I was a stranger and you invited me in” and “I was in prison and you came to visit me (Matthew 25:35,36).”  Prisons come in many shapes and forms, and we don’t need the walls of a home to invite a stranger into our space.

I can imagine the halls of heaven were resounding with the applause of the Almighty on the day Erica invited a stranger into her space.  And I pray God gives me another opportunity to respond to His nudge to reflect His grace and kindness to a stranger.