WITH FRESH EYES: Winner of the ECPA Christian Book Award and the Selah Award. Get your copy here.
Home / Grace on Parade / Abortion And Grace

“Have you ever marched for a cause?”

The question hung in the Sunday School room air. I bowed my head. A month before, I would have held it high as I announced that I’d been involved in three separate pro-life events. After meeting for the first time a woman who has had an abortion, I’m ashamed of myself.

Don’t get me wrong. I am absolutely against abortion in any form, except for the obvious time when a mother’s life is in jeopardy, like in the case of a tubal pregnancy when the baby would die anyway. Other than that, I believe our God cares very much about that little life and that He is big enough to watch over that child, regardless of what struggles the little one may have to face.

The problem isn’t my views about abortion. The problem was how I chose to express those views.

Put yourself in the shoes of a woman in the crowd who has had an abortion as she watches the protesters. Every sign condemns an action she cannot reverse. Every footstep beats a drumbeat of accusation against a choice she knows was wrong. What can she do about it now? The deed is done. She’d do anything to bring that little life back, that life society lied to her about and called it nothing more than a package of placenta wrapped tissue.

You don’t think women are affected by that choice? There is much talk about homosexuals “coming out of the closet,” and openly claiming “gay pride.” I don’t think I’ve ever heard a call for women who have aborted their babies to form communities and proudly announce to the world, “I’ve had an abortion!” There’s a phenomenon called post-abortion syndrome that is as much physical as emotional, and women silently suffer from it for years. The partners suffer too. When I toured a pregnancy support center in Ohio, the director told us their most successful program was a bible study for those touched by abortion. “We have a waiting list of fifty people.” Her next fact seared my heart. “Most of those waiting are men, the partners of the women who have had the abortion.”

Look at another face in the crowd watching the abortion protesters. Put yourself in the shoes of the rape victim. For nine months, she must bear the shame and accusations that she must be at fault, that it must have been consensual, that she must have dressed a certain way, said something, been in the wrong place, or cocked an eyebrow in the wrong direction to lure her attacker on top of her. How will she explain to her child one day that the child’s father didn’t do it for love but for power or for hate?

I’m not advocating abortion for rape victims. I’m simply asking you, my readers, to walk beside the young woman who must bear the shame of something that definitely was not her choice. It’s not easy. Instead of condemning her for a choice she is considering, what can we do to help her make the right choice and to heal the hurt and anguish?

That’s why I’m ashamed of myself for standing behind the signs that implicated women for their actions. In our zeal to correct the lie, we’ve carelessly and unintentionally condemned the woman who believed the lie, who also believed the other lie—that she ought to have a choice over her body. I’ve long wondered about that. How can it be a woman’s choice when her lover, family, doctor, and society pressure her to make the choice they want her to make?

Abortion is a choice, but it’s a desperate choice. Like suicide, it’s a choice made because the person feels there is no other choice. As believers in the God of freedom and abundant life, we need to lovingly offer the other choice. Instead of condemning women for choosing death, we need to make it possible for her and her child to live and thrive. 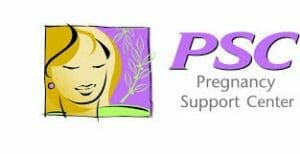 That’s the mission of organizations like Crisis Pregnancy Centers and Pregnancy Support Centers. They offer baby clothes, diapers, and car seats. They provide family and career counseling. They hold all kinds of classes—everything from Bible studies to baby care, family finances, and nutrition. They make life possible.

As Christians, our response to God is to pass forward grace. You see, abortion is not the sin. It is the final choice after a long string of poor choices made not only by the woman, but also by her partner, her parents, and even unconcerned Christians who saw her headed down that path long before. With each choice, the noose tightens, making it more difficult for the young woman and her partner to avoid more wrong choices. Just because we may never have reached the point of considering an abortion, what makes us any less sinful than the person who comes to that ultimate solution? One black stain is as difficult to remove as multiple black stains—and we all bear the black marks of sin, no matter how small or insignificant we want to think they might be.

As God has showered his undeserved love on us, let’s renew our efforts to shower that love on our young women. Let’s demonstrate that there is a better way to face life. Let’s model how to trust God to care for us instead of taking life literally into our own hands. When a woman makes a choice we desperately disagree with, let’s hug her tight, gently tell her about the Savior who forgives and wipes the slate clean, and help her with God’s help to start life over again.

Jesus said in John 10:10, “I have come that they may have life, and have it to the full.” Let’s offer women God’s abundant life.

For more information about shelters and support for pregnant women, visit these websites: