WITH FRESH EYES: Winner of the ECPA Christian Book Award and the Selah Award. Get your copy here.
Home / Grace on Parade / An Undeserved Christmas Present

Three of our family received a special Christmas gift this year – the gift of our lives and well being.  Our gift came wrapped in the forms of a blizzard, an upper respiratory infection and a near tire-blowout. I would have thought our early present under the tree would move us from the normal frenzy to the insane, but they had the opposite effect.  The unexpected events redefined Christmas for me and helped me appreciate and worship the first Christmas gift even more. 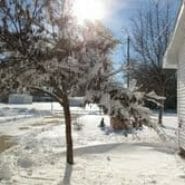 On Thursday, December 20th, we knew a winter storm was coming but those storms so often bypass us, none of us took the weather forecast seriously. My husband and a church elder headed for Springfield, Illinois to be with the family of a church member undergoing a kidney transplant. Another elder and his wife took me to a doctor’s appointment in a town 25 miles south of us.

At noon, it was like someone turned on a faucet spewing snow.  One moment, we could see a thin crusting of white on the lawns; the next moment, we couldn’t see across the road.  We crept home through blinding snow, following a pickup truck doomed to persistent fishtails.  He finally got stuck.  Conditions were so bad, we just had to leave him to his own fate and keep going.  Later, we heard that EMT’s rescued 85 people from stranded cars, fed them homemade chili and housed them overnight in the Roseville Fire Station.

Meanwhile, the family at the hospital told Jack and Harry to leave so they could beat the storm.  But they sat for over an hour in front of a jackknifed semi then inched their way into the town I had left four hours before.  By then, the highway leading home was closed.  Jack and Harry sought shelter with friends and former church members. In the midst of this, Jack was struck with an upper respiratory infection but was able to see our doctor who practiced in that town first thing the next morning.  Later, we heard multiple tales of church members who couldn’t make it home either. All of them found shelter and no one was killed or seriously injured during a blizzard that lasted over twelve hours.

Because of road conditions, we encouraged our daughter to wait a day before traveling home for Christmas.  She started out on Saturday, the 22nd, but, after an hour of driving, called her Daddy. “I hear a bumping noise. Should I be concerned?”  If it didn’t get any worse, he told her, just keep driving home.  Five minutes later, she called again to say she was stopping.  Serendipitously, she was passing a town where a Midas store was right off the highway.  The mechanic quickly put the car on the rack and Katherine found four mechanics gathered under the car, staring at her front right tire.  As she drew near, one mechanic said, “Don’t touch it. It could blow.” He told her it was amazing the tire had not exploded on the highway, which could have caused a severe accident.

There were hugs and tears that evening as we realized the potential danger all of us had encountered.  Any one of us could have been killed or seriously injured over the last three days. But God protected each of us.

That is so not true.  Not one of us deserve His mercy any more than anyone else.  I had to honestly say, “Who am I that You would be so gracious to me and those I love?”

Why did God protect our family this Christmas?

People used to think – and sometimes still do – that bad things happen to people because of some sin in their life.  The disciples asked Jesus if a man was born blind because of his sin or the sins of his parents.  Jesus answered, “This happened so that the work of God might be displayed in his life (John 9:3).” When Paul preached to the folks in Lystra, he said, “God has not left himself without testimony.  He has shown kindness by giving you rain from heaven and crops in their seasons; he provides you with plenty of food and fills your hearts with joy (Acts 14:17).”

God does the amazing so He can display His work through our lives.  His actions become a testimony to who He is. We learn to trust Him more the next time because of what we saw Him do. His mighty acts become faith-builders – both for the recipient and those watching on the sidelines. 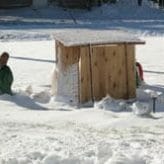 That week was certainly a faith-builder for me!  Suddenly, the shopping, the last minute Christmas presents, the anxiety over having the right foods for Christmas dinner, what to wear to the Christmas Eve service – none of it mattered any more.  My focus shifted to my worship of that babe in the manger who was God Himself.  What was important was that God loved me and wanted me in relationship with Him so much, He gave up His Son for me.

As I was tempted to feel anxious over my daughter’s return trip, I thought to myself, How silly!  The God who protected her from a tire-blowout will certainly not allow anything to happen that is outside His plan for her.  He’s got her covered.  And, if something does happen, He will use it to display His power, love and character, and He’ll give me the peace and strength to weather the storm.

“He who did not spare His own Son, but gave him up for us all – how will he not also, along with him, graciously give us all things (Romans 8:32)?”

I don’t deserve the things God graciously gives me.  Neither do you.  None of us do.  God gives us all things because He wants us to trust that He is willing and able to do anything that is His best for us.