WITH FRESH EYES: Winner of the ECPA Christian Book Award and the Selah Award. Get your copy here.
Home / Grace on Parade / April: Tragedy or Triumph

In the last week, three people our family knows have died. One was a long time family friend and missionary to Mexico. Linda helped our daughter Christine prepare for her mission internship two years ago. Then the mother of two kids in our church’s youth group died unexpectedly. And a dear sweet 90 year old man fought the final round of his fight with life and won his eternal crown.

Death hailed from a distance and threatened in other courts. We heard of a suicide in the town where we used to live and my daughter told of some missionaries her church supported who were shot to death in Afghanistan. Another friend’s father-in-law faces multiple health issues and, while he is scared of death, refuses to accept the gift of life only Jesus can give. 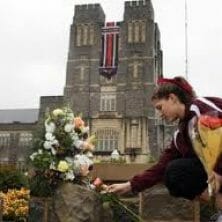 Does it ever seem like death and disaster comes in waves, all bunched together? Trouble comes in threes, we were told in our ministry in Kansas, and sometimes in sevens. There were days I was tempted to believe that.

Ever since the beginning of time, man has tried to figure out the rhyme, reason and rhythm of suffering. Every location I’ve lived in, I’ve heard folks say their particular area has a high risk for cancer, then offer explanations for the cause: high voltage power lines, ground water, crop dusters, or a nearby chemical plant. The truth has been the stuff movies have been made of; most often, however, it is just speculation. I have news for you. In all six places we’ve lived in the last thirty years, every area has a high rate of cancer and a 100% chance of death.

Others speculate about the time of year. I’ve heard the suicide rate is higher at Christmas; recently I heard that statistic debunked. When we lived in Colorado, someone told us the suicide rate was highest in the Spring. Wind was the given explanation. After the brutal Colorado winters, daily 40 mph winds kicked in like clockwork and people found that depressing. I’ve wondered if there is something about the month of April.

Have you ever noticed the number of historic tragedies that have happened in April? Is there anything significant about April?

Some skeptics would say if you did research on any other month, you would find similar patterns. Others, like Robert Blaskiewicz,  say it’s a matter of unhappy circumstances. Adolf Hitler’s birthday is April 20 so some, like the Columbine gunmen, have commemorated that day with violence. Timothy McVey purposely planned his bombing of the federal building in Oklahoma City as retaliation for the way the Waco affair was handled.

Blaskiewicz further comments on people’s drive to connect the dots by saying, “When a responsible agent is not easily discernible, that sense that something is still deliberate endures, and you are left wondering, “Well, who caused it, then?” You fill in the blanks.”

I may be guilty of trying to latch on to a conspiracy theory myself, but I wonder if the heightened violence and death – if indeed true – is due to Easter. Think about it. Easter is the high holy day of the Christian faith. It is the day we celebrate Christ’s victory over death. Wouldn’t it be just like the Enemy to challenge our celebration?

Oh yeah? You believe in eternal life, huh? You think you don’t have to fear death, huh? Let’s make it a little personal and see how you Christians react.

An immediate obvious hole in my own theory is that God is Lord over life, not Satan. God controls the moments when any of us leave this life. Yet Satan is the orchestrator of evil. I wouldn’t put it past him. You know, as intriguing as this is, why is this happening is not the question I should be asking. The important question is this. How should I as a Christian respond?

How can a Christian react? 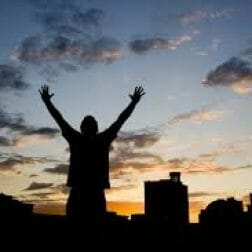 1. Stand firm in your faith. The Sunday after Easter, the songs at our church’s worship service reminded me of the victory we have in Jesus. These lines have run through my head all week as I’ve pondered the grief my community and my family faces:

“Because He lives, I can face tomorrow.”

“I was nothing before you found me. You have given life to me.”

The same power that was needed to bring Christ back to life is available to us. We can face uncertain days and look evil straight in the face because Christ overcame death.

2. Make use of every opportunity to proclaim Christ as Lord. Embedded within each tragedy, often unnoticed by the media, are stories of Christians reflecting the love of Christ to those who have suffered loss. Out of Columbine came the beautiful story of Cassie Bernall who said “Yes” when asked if she was a Christian. Out of the Virginia Tech massacre came the story of the professor who used his body as a shield so students could escape out the window. I remember the story of a preacher who implored people on the Titanic to give the life jackets to the unsaved. And in our own corner, we are witnessing love conquering sorrow, faith triumphing over death.

No matter what happens in our world, no matter when Satan attacks and tests our belief in Christ’s power over death, Christ will have the final word. He will have the victory (1 Corinthians 15:57).

What’s your story of triumph?

Previous Post: « A New Twist on Separation of Church and State
Next Post: Ministry to the Minister’s Wife »