WITH FRESH EYES: Winner of the ECPA Christian Book Award and the Selah Award. Get your copy here.
Home / What I Saw Today / Blessings of Brokenness: Three Steps Toward Moving On 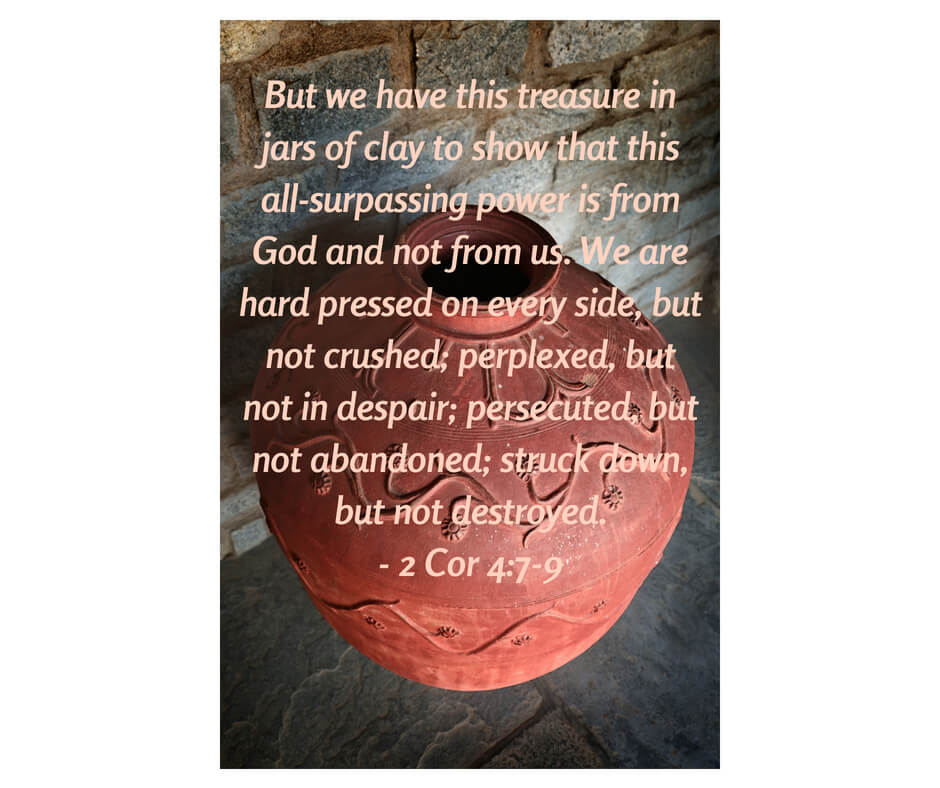 I realized this important truth – there is just some brokenness in life I cannot fix.

It was an ordinary day like any other day. After stashing load three into the clothes dryer, I headed to the bedroom to fold and put away the other two loads that had dried as normal as a normal dryer will dry. Twenty minutes later, I opened the dryer door to check the progress of my third load. Everything was soggy cold. Maybe it hadn’t been twenty minutes.

More time elapsed, and the drum of my clothes dryer remained as cold and humid as the inside of my refrigerator. My sluggish brain accepted the truth. After 18 ½ years of trouble-free drying, the heating element of my clothes dryer died a sudden death. Within one day, Jack and I discussed our options, called the repair man, discussed the matter some more, called the repairman a second time, and handed over the credit card for the purchase of a new washer and dryer set. It was almost too easy.

I never stopped to consider that I ought to be able to fix the dryer myself.

The options were clear – pay someone to fix it or move on to a new set.

It was a week of brokenness. The day before, word circulated around our small community that we were under a boil order. Don’t drink the water. Boil all water you plan to use for cooking. Put bleach in your rinse dishwater. I didn’t like the extra work, but like everyone else, I took the necessary steps to keep my household safe.

I never once berated myself that I couldn’t fix the water situation.

I was content to do what I could until others responsible for the fixing took care of the problem.

As I mourned several relationship snags that week, I had to chuckle at myself. If I’m so content to let others fix my dryer and household water, why do I expect myself to be able to fix the brokenness of my relationships on my own?

I do that all the time.

Do you ever berate yourself with those kinds of lies?

Jacob in the Bible did.

Jacob was a man with a competitive nature out of control. From the moment he entered this world, he was grasping at the heel of his brother, looking for a way to be first. This caused all kinds of contention between the two, ending in Jacob fleeing from Esau who had murder on his mind as the only solution. Twenty years with a father-in-law as cagey as he, softened Jacob and, under God’s instruction, he returned to the region around Bethel, seeking for reconciliation with brother Esau.

Jacob went to extreme measures to woo his brother’s favor, offering him expansive gifts, and showing obeisance and humility by having his many flocks, wives and children go before him. He even went hand to hip with the Lord God Almighty to procure God’s blessings (see Geneses 32:24-29, Hosea 12:1-5). If he just did all the right things, his relationship with Esaw would be mended.

It didn’t work. It was like putting a band-aid on a cancer. Esau gave lip service to restoration. After the initial meeting, one brother went one way and the other brother went the other way. They were civil enough to bury their father together, but the long term damage carried over into subsequent generations.

Jacob didn’t seem to realize that Esau had baggage of his own.

Esau himself was broken It was Esau who made the choice to scorn his birthright, harbor jealousy toward Jacob, fly into a rage when Isaac gave Jacob the patriarchal blessing, and marry a woman of the land rather than a bride of the Promise. The Old Testament is strewn with the aftermath of the brotherly brokenness, ending in the sad tale the prophet Obadiah tells of the downfall of the Edomites, the descendants of Esau. They would be annihilated because they opened the gates for Jacob’s enemies to destroy them rather than stand with them as family (Obadiah 1:10-15). In spite of Jacob’s efforts at reconciliation, Esau’s hate seeped through the generations until God decided to annihilate them – not because Jacob was the chosen favorite, but because the Edomites chose contentiousness over cooperation.

Jacob couldn’t fix the brokenness of Esau’s jealousy. He could only attempt to fix himself.

What do we do when we can’t fix life’s brokenness?

My clothes dryer and Jacob gave me the progressive steps toward solution:

Jacob didn’t allow Esau’s formality to stop him from fulfilling his destiny. He moved back to Bethel, let the relationship go, and settled in to finish raising his own family.

Jacob was broken too.

The sad part of the story is that he couldn’t even do that very well. Old family habits die hard. Favoritism was more inbred into Abraham’s descendants than a genetic mutation. Jacob reaped the weedy harvest of the preferential treatment he showed to Joseph by losing the very one he loved for over twenty years. In that timeframe, another group of brothers did a lot of growing up and relinquishing, recognizing that Dad’s favoritism didn’t justify their violent reaction.

The good part of the story is that God still accomplished His greater purposes through Jacob and his lineage. While Jacob continued to make mistakes, he clung to God’s promise that, through his family descendants, all nations would be blessed. He sought the Lord. He allowed God to shine through the cracks of his brokenness to reveal His greater glory. He recognized that God was still working His plan, shining though Jacob’s weakness to bring healing to his family and the nations at large through Joseph’s sojourn in Egypt.

“But we have this treasure in jars of clay to show that this all-surpassing power is from God and not from us.”

God doesn’t cover our cracks with etched gold like the Japanese art of kintsugi. He fills our lives with His golden presence, allowing His light to shine through our mistakes.

God fills our lives with His golden presence, allowing His light to shine through our mistakes.

On Heaven’s doorstep, he will make all things new. I will be a completely new creation. No more cracks. No more brokenness. No more weak spots. Brand new.

In the meantime, I don’t have to be able to fix everything on my own. That’s God’s job, not mine. My task is to follow him. So that might mean, I have to accept the brokenness in myself and in others and just simply follow Jesus anyway.

Move on. Seek God. Put your past behind you. Do what you can to resolve your strained relationships, realizing that only God can fully fix the brokenness of the other person, and that your main responsibility is your relationship with the Lord. You keep your eyes on Jesus and seek Him always.

Like Jacob, God will bless you for it, blessings far more satisfying than a new clothes dryer.