WITH FRESH EYES: Winner of the ECPA Christian Book Award and the Selah Award. Get your copy here.
Home / What I Saw Today / Doubt: Is It Okay To Question God? 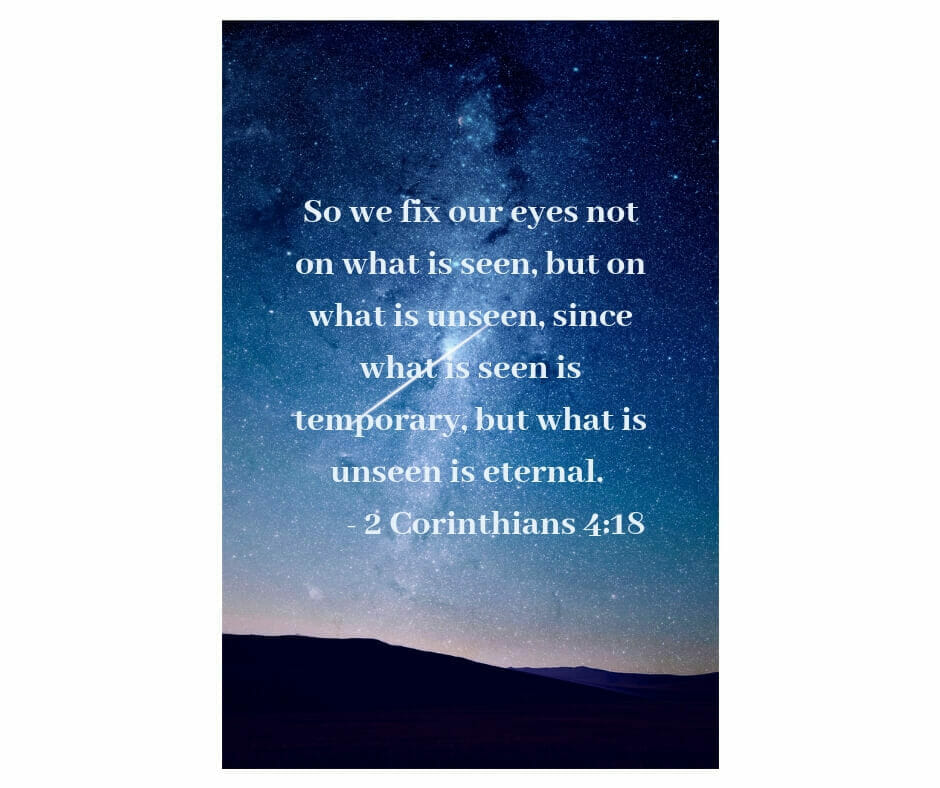 Yes, I admit. I’ve had occasion to doubt God. Not His existence, but His ability and willingness to work outside the way He’s made things to be.

It was one of the most special nights of my entire life. Twenty women gathered in an alcove off our church gym to pray for me as I faced surgery to repair my torn retina the next day. Women who never prayed aloud in public settings spoke, voicing their love and concern for me. I’ve never felt so loved and championed by a group of people. I went home, feeling like no matter what happened the next day, their presence, compassion, and faith could carry me through the next segment of my life.

The spell was broken when the organizer of the prayer meeting prayed. “Lord, we ask that You give Karen better vision than she’s ever had before.” Whoa, wait a minute. That’s not happening. I mean, I believe in a powerful God, but sweetheart, you don’t know my eye history. I’ve got eight things wrong with my eyes, I’ve had this eye condition since I was born, and I’ve always sensed that my vision would eventually get worse, not better. Jesus healed blind people because He needed to give evidence to His existence as God’s Son. That kind of miracle doesn’t happen today. It’s just not the way God has wired our bodies. Nor is it the way He operates.

Many of you already know my story. I was so wrong. The doctor took the opportunity to rectify some issues and I did come out of surgery with better vision than I’ve ever had before. God did what I thought was logistically impossible and out of synch with His operational mannual.

The Apostle Thomas and I belong in the same class.

Thomas has suffered a bad reputation over the years. His determined, “I’ve got to see it to believe it” reaction when others told Jesus had risen from the dead earned him the two-millennia long title of Doubting Thomas. I don’t see Thomas that way and neither does Gene Getz, author of the book, “The Apostles.” Pessimistic? Yes. Analytical. Oh yeah. Doubting? Well . . . what kind of doubting?

Thomas’ interaction with Jesus appears earlier in the book of John. After the apostles protested that it was too dangerous for Jesus to go back to the area around Jerusalem because his dear friend Lazarus was sick, Jesus told them that going back to Bethany was an opportunity to demonstrate that He indeed was the Son of God. Not getting it, Thomas said, “Let us go that we may die with Him (John 1:16).

That’s a pessimistic response, but it also shows the level of Thomas’ commitment. He was the kind of person that thought things through. He wasn’t impulsive like Peter who whacked off the ear of a guard’s servant at Jesus’ arrest. Realistic Thomas assessed the implications and risks and was willing to suffer the worst.

Thomas showed his logical thinking in the Upper Room when Jesus outlined the game plan for the next few days. Pragmatic man that he was, Thomas point-blank asked Jesus, “Lord, we don’t know where you are going, so how can we know the way?” He was one of those people who had to have the answers before he moved forward. He wasn’t going to blithely and blindly accept what Jesus said or what others said about Jesus. He had to figure it out on his own.

So when Mary Magdalene reported she had seen Jesus, Thomas’ reaction was true to his character. He wasn’t willing to accept her report – he had to see it for himself.
His reaction to the reports about Jesus’ resurrection makes sense. After all, someone coming back to life is not part of the natural order of things. People are born, live, and die. Somehow Thomas forgot about Lazarus and the others Jesus brought back to life. Even if he had, this was different. How can someone who is dead bring themselves back to life? It didn’t make sense and for pragmatic Thomas, things had to make sense.

Jeff reminds me of Thomas.

Jeff was one of those dopey older boys whose mission in life was to befuddle teachers. He was the kid who would ask questions like, “Can God create a rock too heavy for Him to lift?” As a Sunday School teacher with a Type A, goal obsessed personality, I had to reign in my tendency to blow Jeff off. Sometimes I did. Sometimes I tried to answer his impossible questions and then redirect him and the rest of the waiting class to my lesson plan. I would tell Jeff I’d find the answer and get back to him later – much later. Something in my spirit told me to let go of my carefully organized plans and try to answer Jeff as best I could.

As the months went by, Jeff’s questions became less dopey, more thoughtful, and more pointed. They centered on two topics. Every other week, he would exclaim, “I just don’t get this Trinity thing.” I would respond, “Well Jeff I don’t get it either but that’s the way God is.”

Over and over, he would say, “I don’t get this cross thing. Why did Jesus have to die?” My answers never seemed to satisfy him. I didn’t understand how so much doubt could reside in a kid who had grown up in a Christian family. Would he ever come to faith in Christ? One day, Jeff said to his dad, “I get it. I’m ready to accept Christ.” Like Thomas, he finally came face to face with the Christ he had so long tried to figure out and was ready to say, “My Lord and my God.”

Years later, I asked Jeff why he was so hard on me.

“Why all the questions?” I asked.

I’ve pondered his answer for many years. “I didn’t want to just accept someone else’s faith. I wanted to make sure I was accepting it because I understood it for myself.”

Questioning God is not a sin.

God has created some of us to be analytical and see the more realistic side. Vision casters and gate keepers both play important roles in any group. We need people willing and courageous enough to think through a problem, analyze the risks, snags, and obstacles, and ask the “What if” questions.

Thomas’ overactive analysis almost kept him from accepting the reality of the Resurrection. Jesus never condemned Thomas for his questions. When the time came to step forward into believe, Jesus told Thomas point blank, “Put your finger here; see my hands. Reach out your hand and put it into my side. Stop doubting and believe (John 20:27). Questioning only becomes wrong when it stands as a roadblock to faith. Jesus made that clear when he said, “Because you have seen me, you have believed; blessed are those who have not seen and yet have believed (v. 29).” At some point, we need to move forward in faith, even if we don’t yet have all the answers.

And me? I’m so glad God is patient with supposed know-it-alls like me and Thomas who think we have a corner market on understanding  the anatomy of the body and what is possible better than even God Almighty Himself. So many times, God has gently said to me, “Oh yeah? Here is what I’m really like. Here is what I really can do.”

My knowledge of the human eye, how it was supposed to work, and the technical details of how my eyes  had failed to work made me even more aware and appreciative of the miracle God brought about in my life. I doubted because I had put God in the box of my limited expectations, based on what I knew, saw, and believed to be true. I failed to look at the broad expanse of the unseen beyond the limits of my human knowledge. His answer convinced me  how infinite His power is.

Thomas though long and hard about the impossibility of the Resurrection. When he was convinced of the certainty, he was willing to acknowledge Jesus for who He was – the Son of God. When my surgery was over and recovery was complete, I was moved to fall at the feet of Jesus and echo Thomas’ famous proclamation: “My Lord and my God.” Better than anyone, I knew how impossible the miracle was that had just happened. Yet it did happen, and now I can see.

Do you ever doubt or question God?

When you find yourself in a time of doubting, here’s some strategies I’ve learned from Thomas and Jeff on how to handle doubt.

In God’s time, He will reveal the answers to you. Keep talking to him, reading His Word, and looking for Him in your daily life. God will prove faithful and bring you to a point of faith and worship.

Previous Post: « Blessings of Brokenness: Three Steps Toward Moving On
Next Post: Galatians Bible Study Introduction: Where in the World is Galatia? »