WITH FRESH EYES: Winner of the ECPA Christian Book Award and the Selah Award. Get your copy here.
Home / Grace on Parade / Border Patrol

Like a highway border patrol, God is always watching out for you. 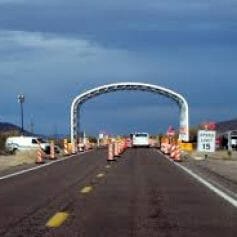 As you travel north out of Sierra Vista, Arizona along Highway 90 toward Benson and Tucson, a border patrol checkpoint canopy spans the road. The first time I approached the checkpoint, my heart constricted in my chest cavity.  It was a sober dose of reality that illegal immigration is a big deal in Arizona. The approach into the unknown sent visions of soldiers with drawn semi-automatics pilfering through my purse and our car trunk, asking us questions, scrutinizing our purchases, demanding to see our I.D.’s. Should I have carried my passport?

I have nothing to hide, I reminded myself. After all, I know my national identity. Like airport security, I should be thankful that our country is doing its job to keep citizens safe and instead of being nervous, I need to look at this as an adventure. Think of the stories I’ll get to tell about my experience with the Border Patrol when I go back home to Illinois!

We pulled to the stop sign and my aunt took off her sunglasses and rolled down her window.  One lone soldier facing her car door leaned against a post.  “Have a good day” was all he said and we quickly started on our way. 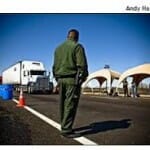 What?  That’s it?  Nasty thoughts replaced my foreboding premonitions and my anticipation of an adventure. Some job our guys are doing to keep the illegals out.  I justified their actions.  Maybe it was just one guy not doing his job.  Maybe this was a one-time thing.  Maybe (oh perish the prejudicial thoughts) they saw we were “gringo” and waved us on.  We weren’t what they were looking for.

Future forays through the checkpoint dispelled the first two theories.  Each time we approached, we saw several guys just standing around with one man positioned at the roadside to wave cars through.  They reminded me of a Walmart stocking crew I observed once of four guys watching one guy do all the work.

Then I started paying closer attention.  The standing around was an act, a cover up.  They were purposely disguising what they were really doing – observing. Each of those guys had a specific job; each were watching and waiting for action. Like Walmart greeters, their real job was to observe and be on the alert. While the front man had our attention, another guy was looking in the back of the car.  Another took his dog to sniff our tires.  Other men stood ready as back-up if we should resist in any way.

God works much like border patrol soldiers.  And I too often have the same attitude toward God that I initially felt toward those hard working men and women.

When I’m in the midst of a crisis, when those I love face danger or life complications, when insurmountable problems seem to have no end, or when I see the mess my country is in, it’s easy to look around and think, God isn’t doing anything. Yes, Scripture says He is with me, but I would sure like Him to say more than, “Have a good day, Karen.”

Why won’t God do something?

The fact is, He is doing much more than standing passively beside me.
Moses described the Promised land as

“But the eyes of the LORD are on those who fear him,  on those whose hope is in his unfailing love (Psalm 33:18).”

And a verse that has come to have new and richer meaning for me, Psalm 23:4:

“Yea, though I walk through the valley of the shadow of death, I will fear no evil; For You are with me; Your rod and Your staff, they comfort me(NKJV).”

Think of a narrow canyon with high cliffs and loose rocks, where the rocky walls hide the clarity of the sun’s rays.  Danger lurks behind every rocky point.  I don’t have to fear the evil in that foreboding place.  Not only is God with me, His rod and staff prod me away from any danger.

To my ignorant and naive eyes, it may seem that God is doing nothing.  As a loving Father, He is ever watchful for the danger that might overtake and overwhelm me.  He will not let anything harm me that will utterly destroy me.

Like those attentive military border patrolmen, He is always alert, always looking behind me and around me, ready to catch me if I fall, ready to discipline me if I need it. If my faith is in Him, His job is to watch out for those external forces that would seek to destroy my soul and to cut me down before God’s appointed time to bring me home.