WITH FRESH EYES: Winner of the ECPA Christian Book Award and the Selah Award. Get your copy here.
Home / Grace on Parade / Caught Being Good

I love Caught Being Good kind of stories

This story comes straight out of the Lions’ Club International magazine. I’m proud to say that I am now a “Lioness,” the first woman to join our local Lions’ Club. I joined, not because I want to force my way into a male dominated civic club, but because I have so much respect for this club that serves communities around the world and from whom I have received personal help and encouragement.

Lions’ Club International is one of the largest civic club organizations in the world, with 45,000 clubs and 1.35 million members. You may know that their primary service is to those with low vision. They were large donors to the non-profit Tucson Association for the Blind where I received rehabilitation services when I was a teenager. My local club in my rural Western Illinois town pays for eyeglasses for those who can’t afford them.

You may not know that Lions’ Clubs do more than just help the visually impaired. Their website says they do whatever is needed to help their local communities. Another page of the website says, “Because we’re local, we can serve the unique needs of the communities we live in.” So local Lions’ Clubs were there during the Newtown School Shooting, in Australia to raise money to erect a statue commemorating World War 1 efforts, there in Norway to help Syrian refugees. Our local club thought beyond the parameters of eyeglasses to help provide hearing aids for another needy person.

Here’s my favorite story. Until last year, I didn’t know there were student Lions’ club organizations in both colleges and high schools. My daughter, an Optometry student, became President of her club and raised money for Pilot dogs. That didn’t surprise me The lead article in the Lions’ Club International magazine did. 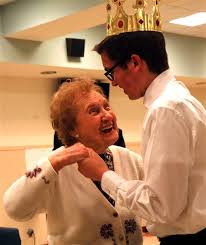 The King Phillips Regional High School “Leo” Club (200 members strong) puts on a senior prom every spring. They call it a “Senior Senior Prom.” They invite residents of local nursing homes to join them for an afternoon of Glen Miller tunes, lobster bisque and a turn on the dance floor. In a generation where we are led to believe that kids focus only on their own self-gratification at that all-important Senior Prom, here’s a group of kids that focus on making that day a special day for a group of senior citizens.

The Leo Club also connects with other Lions’ Club in the area, helping provide extra manpower and energy for fundraising events such as water stops for road races and parking attendants for charity dog shows.

At King Phillip’s High School, it’s cool to be a Leo and they are known, the article says, for being a harder working organization than any sports team at the school. Anyone can join the club and the calendar of events is full to the brim. Their service projects mostly involve reaching out to Senior citizens.

You don’t have to be a member of a club to make someone’s day special. It doesn’t have to even be elaborate like lobster bisque. One nearly 80 year old lady in our congregation fills water pitchers every Friday morning at her local nursing home.

One Leo member said it best, “It’s the simple things in life that can make people happy.”