WITH FRESH EYES: Winner of the ECPA Christian Book Award and the Selah Award. Get your copy here.
Home / Grace on Parade / Tribute to Truett Cathy 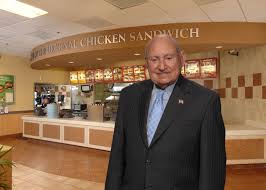 When I heard the news that Truett Cathy passed away, I thought about writing a blog that paid tribute to this incredible man for whom I’ve had a lot of respect over the years. Truett Cathy, founder of the Chick Fil-A restaurant chain, was best known for his fantastic chicken sandwiches, his zany cow commercials, and his unwavering commitment to closing his restaurants’ doors on Sundays so his employees and customers could enjoy a day of rest as God designed.

Ho hum. You’ve probably heard that before. It was all over the news the day after he died. The news media may or may not have mentioned that Cathy gave away ten percent of his profits to world missions. I know that personally because I met a woman who represented Chick Fil-A at a bible training center in Austria where I served a short term mission project. She was from Romania, lived in London, did graduate work in Austria, and led Bible leadership seminars in Africa funded by the Chick Fil-A corporation. 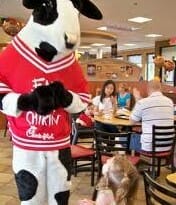 One thing everyone can be certain of is that Truett Cathy proved a business can be committed to the Christian values of integrity and service, and still be successful. Do you remember the story of how Chick Fil-A employees gave away hundreds of sandwiches to stranded motorists during an ice storm? The company made popular the restaurant greetings, “How may I serve you?” and “It’s my pleasure.” A business committed to serving others, Cathy showed, is the best way to run a business.

Who’s Harland Cary? Let me save you some time. Before you check Google or Wikipedia, you won’t find anything more than public records saying he existed.

Harland Cary, five years older than Truett Cathy, died the day after Cathy. Harland will best be remembered as the founder of Colegio Biblico, a small bible college in Eagle Pass, Texas that is devoted to training Hispanic pastors who return to Mexico and Central America to plant and lead churches. (Want to know how to solve the illegal immigrant problem? This is it. Train Christian leaders who will help transform individual lives, who will give people hope and courage to change their culture. Then they won’t grasp on to the false hope of a better life in the States. Instead, they will spread hope and freedom where they are.) Harland intended to serve as a missionary in South America, but while he was studying Spanish in Mexico in preparation for mission work, three young men presented him with the need to train Mexicans who already knew Spanish and could minister to their own people.

The 2013 International Conference on Missions showed a beautiful video tribute to Harland and his wife Francis. The ICOM President told a tear inducing story of the impact Harland had had on his life and the lives of thousands of Hispanic Christians and Christian leaders. Yet Harland, as I can personally attest, was a quiet, humble, unassuming man. If you met him, you would never dream that his life and work had such a great impact in nurturing the Kingdom of God in the Hispanic world.

A family member wrote me this about Harland Cary: ” Harland had a love for people and was always willing to share his home and anything else he had- they took in war refuges and taught them English and sent them to school- they are now productive American Citizens who love our country and the Lord.”

In some ways, Harland may have even surpassed Cathy in the good he did for the Kingdom. When I heard of Harland’s death, I instantly imagined what the meeting between these two great Christian leaders would be like in Heaven. They’d probably meet each other with a handshake and a clap on the shoulder, both uttering, “Good job.” Then, with an admiring crowd around them, they’d talk shop for the next millennium.

I stopped myself. Heaven has no pecking order. Just as Harland’s impact may have been as great as Cathy’s even though the news media had no clue who he was, there will be a lot of other folks in Heaven who receive that “Good and faithful servant’ kudos from the Lord. Who know? Cary and Cathy may both have to wait in line behind a saintly mom who endured years of abuse and heartache but stayed faithful to the Lord as she taught a Sunday School class of two or three inattentive children.

I may never have the far reaching influence of a Truett Cathy or Harland Cary. As Jesus explained in the parable of the ten talents, however, God asks only that I do the best with what He has given me and let Him take care of the results.