WITH FRESH EYES: Winner of the ECPA Christian Book Award and the Selah Award. Get your copy here.
Home / Grace on Parade / Charles Templeton: The Man Who Said Farewell To Faith 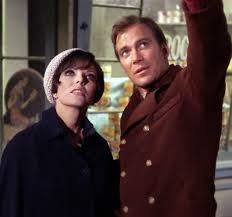 What If Billy Graham had followed in the footsteps of his co-worker, Charles Templeton?

My mind likes to play “what if” games. Maybe it’s the fiction writer in me. I like to take events of history and twist the details, speculating on the impact a changed set of circumstances would have on the future. Perhaps I got my inspiration from the old Star Trek episode, “City On The Edge of Forever” where Kirk falls in love with Edith Keeler, a pacifist. Spock has to show Kirk that if the Allies are to win World War 2, Edith has to die. If she doesn’t, Germany would gain control over the atom bomb and all of history would be changed. My quirky brain thought of Edith Keeler when I heard the story of Charles Templeton.

Charles Templeton was a co-worker with Billy Graham in the 1946 London Evangelistic Crusade. Some predicted that Templeton would become the next great evangelist, following in the footsteps of Billy Sunday and Dwight L. Moody.

But Templeton had doubts about his faith. He doubted the authority of Scripture. He wondered how a loving God could allow such violence in the world. He pondered how, in a world full of multiple religions, Christians could claim they were the only ones who had it right.

His confusion was understandable. The world had just witnessed the horrors of World War Two. Liberal thinking had stepped aside for neo-orthodoxy which was questioning all kinds of crazy things including the relevance of life and the authority and validity of all the world had known and held dear. Bookshelves held tomes by such deep thinkers as Friedrich Nietzsche, Karl Barth, and Soren Kierkegaard.

Charles Templeton was confused. So was Billy Graham. In the midst of their evangelistic meeting cycle, Templeton even told Graham he was fifty years behind the times and his faith was too simple – no one believed that the Bible was the inspired Word of God anymore.

So this great evangelist came to a crossroads in his faith. How could he possibly continue to preach the gospel if he didn’t believe in what he preached? He walked away from all of it.

What did Billy Graham Do?

Actually it’s a good thing he did. Think of it. What if he had continued to preach? What if he had used his stirring gift of public speaking to speak to thousands all the time doubting the veracity of Scripture? Wouldn’t his watered-down theology have trickled into his sermons? What if he had replaced Billy Graham in history’s time line? I’m sure the Holy Spirit would still work in the lives of men and women; God’s word will not return void, the Bible says, but the power and conviction would not have been there. It’s a scary thought. Think of all the lives impacted by the Billy Graham Crusades.

What happened to Billy Graham? Templeton’s wavering caused Graham to think twice about his faith. Was the Bible really what it said it was? In his autobiography, Just As I Am,” Graham tells how he read stacks of books on both sides of the topic. Unlike his co-worker, he turned to the Scriptures, pouring over passages that relentlessly said, “The Lord says” or “Hear the Word of the Lord.” If the Bible were written by mere men hundreds of years after the fact, how could any one so arrogantly claim to speak in the name of God, he reasoned.

Graham’s doubts lingered. One night, he went to a quiet place and wrestled with God, weighing the matter over and over. He finally came to this conclusion. He’d studied all the books. He’d poured over the Bible. There was still no clear answer. The only answer was this: He would have to accept God at His word in faith.

Graham relates that a great sense of peace came over him. With that renewed conviction, he continued his preparations for the 1949 Los Angeles Evangelistic Crusade which ultimately set the course for the rest of his worldwide ministry. 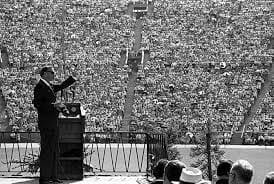 God made redemptive use of Charles Templeton’s doubts. Because of his doubts, Billy Graham sought the truth. Because he wrestled with the truth of Scripture, he became stronger for it and became the mighty preacher God was able to use.

If you have doubts about your faith, that’s all right. God can use those doubts to make you stronger. He doesn’t expect us to accept the truth in blind faith. But He does want us to be honest in our search, to go to the primary sources of truth rather than listen to what others say about the truth. He wants us to work the problem.

All conclusions at some point take a measure of faith. If you have doubts or questions about any part of the Christian faith, I invite you to weigh the evidence. Then step out in faith and take God at His Word. Experience the peace and conviction that Billy Graham experienced. Then watch God use you to convince others of the Truth of God’s Word.

Be a Billy Graham, not a Charles Templeton.