WITH FRESH EYES: Winner of the ECPA Christian Book Award and the Selah Award. Get your copy here.
Home / Grace on Parade / Coloring Page Creativity

I have never liked coloring pages for children.

To me, they are what I call a cookie cutter craft, a busy work activity that keeps kids in their chairs and gives the teacher a breather, a useless activity where the kids can disengage their brain and go on auto-pilot.

Now tell me, how do children learn to apply the lesson of Jesus’ resurrection by simply staying in the lines of a coloring page? And how can they individually react and interact with the lesson content by doing something the same way everyone else does it? The only chance for creativity and individuality is in their choice of crayons. Boy do I ever sound like an art Grinch! And don’t try to convince me that I don’t like coloring pages because some of my five year students can color better than I can! 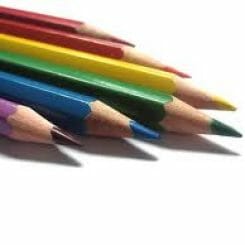 The Tuesday before Easter, after telling the story of Jesus’ resurrection, the teacher for the second and third grade class of our after school children’s program gave the four kids a coloring page. It’s one of those coloring pages where the instructions tell the student to color the areas that have a dot all one color, then they can color the rest of the sections any color they want. The areas with the dots reveal a secret message. It’s a little more complicated than a simple coloring page but still a coloring page. (See my photo: Can you pick out the hidden message?) 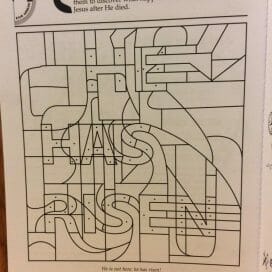 As the helper that afternoon, I wandered from child to child, checking their work. I was amazed. What I considered a cookie cutter activity became an expression of who they were. Each child not only chose different colors, they were each so different in how they colored, how quickly they colored, and how they approached the project.

Kayla, usually our quiet obedient child, followed the directions to the letter, yet hurried through the page. She colored the words in orange, then quickly, almost scribbling, colored the rest of the sections in a hurried blue. Observation: at least for that day, Kayla likes coloring about as little as I do.

Hunter, equally quiet and obedient, also followed the directions exactly but spent far more time on the project, meticulously coloring the letters, carefully staying within the lines, then finished the rest of the stained glass sections in different colors, still maintaining the same careful style. It was pretty, a little originality, but pretty tame. He was frustrated that he didn’t finish. Observation; Hunter is a by the book kind of kid. We need those kind of people. They’re predictable, loyal, follow directions, dependable.

Rachel, the child who is out of her seat as much as in it and who often refuses to do worksheets for the simple reason that she doesn’t want to, also didn’t do what I expected. She followed the directions but went a step beyond, coordinating her colors and putting time, effort and thought into how she colored. I could almost see her little mind work several colors ahead, planning a big beautiful picture for Jesus. The exuberance that laces every bouncy step she takes burst forth in that beautiful picture.

Noah was our biggest surprise. I expected he would be the one who wouldn’t even finish the picture, would dash it off in scribbles of dark colors – if I could get him to sit down and do the project at all. I started to chide him for not following the directions to color the areas with the dots all one color, but I looked closer at his work and held my tongue. The dotted sections were a carefully calculated alternating pattern of lime green and teal. Then he colored the rest of the sections with random colors, that still showed thought and planning. At first I thought his picture wouldn’t work but in spite of using two colors, the words “He is Risen” stood out in a blaze of beauty.

Each child was so different.

Each completed coloring page was like a window with the curtains parted that allowed us to look into their little minds and their souls. I realized that creativity comes in many shapes and sizes, and that even if the children had colored their pictures the same, their individuality would have still shined through. Isn’t that awesome that God creates each of us so differently, that He has created us to be creative in our own special way?

Like Rachel and Noah whose minds were mapping out their pictures faster than their hands could color, God had our design planned even before we were a dot formed on the side of our mothers’ womb. He had a special, unique, one-of-a-kind design for each one of us, that even though we all follow the same blueprint of being made in His image, we are still so incredibly, intentionally different from each other.

I stood behind my group of children and worshipped my amazing, creative God who chooses to pour out His power, ability, creativity and love in such a lavish way. Even more so, He didn’t just design and create us then walk away from us. He created and designed a plan to put us back together when by our own choices, we lay broken and wounded. After all, sending His Son to die the most brutal of deaths then bringing Him back to life is a pretty creative plan.

One more thing amazes me. Somehow I’m always learning more than the children I teach – even through coloring pages.