WITH FRESH EYES: Winner of the ECPA Christian Book Award and the Selah Award. Get your copy here.
Home / Grace on Parade / D-Day

To the average ground soldier setting foot on the beaches of Normandy, the D-Day invasion could have looked like a total failure. 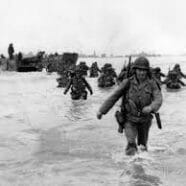 June 6, 2014 commemorated the 70th anniversary of what has become forever known as “D-Day,” the initial Allied seaborne invasion of the German held French coastline during the Second World War. This single day goes down in history as one of the most risky, daring, and high cost invasions of warfare.  Desperate to free Europe from the Nazi grip, the Allies launched an all or nothing attack, pouring 160,000 troops in one day on to the beaches of Normandy.  Ten thousand of those troops became casualties including 2700 killed on that one day. History records Normandy as a success.

What caused the Allies to win?  They were able to deceive the enemies, the weather cleared enough for them to complete their mission, the sheer numbers overwhelmed the Germans causing more loss for the Hitler regime than any battle up to that point, and, as the movie The Longest Day depicts, sheer courage and determination rued the day. 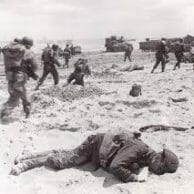 I keep thinking about the soldiers coming off those boats on to the Omaha Beach, forging ahead, all the while watching their buddies get knocked down by German snipers on the bluffs towering over them.  They didn’t have General Eisenhower’s perspective of the Big Picture.  It wasn’t till long after that day – if they lived to tell the story – that they would know the truth –the invasion was indeed successful. I would think it would be so easy to believe the Allies were losing their grip and to despair that they had failed.

No doubt the United States is slowly unraveling at the moral seams constructed by our Founding Fathers.  We hear newscasts of police officers ambushed at family friendly pizza restaurants and bakery owners hauled into court, forced to take sensitivity training just for refusing to make a wedding cake for a same sex couple. Reports of carnage from natural disasters, corruption in the government, and escalating crime appear daily in the media. As often as not, when a group discusses the latest tragedy, I will hear someone say, “Look how terrible things are.  Jesus must be coming back soon.”

If I read Scripture correctly, what we see now is nothing more than Braxton Hicks contractions.  Not intending to be a bad news Bonnie, but it’s gonna get lots worse, folks, before it gets better.

“For the secret power of lawlessness is already at work.”

That’s for sure! I think we are already well convinced of that. But later, Paul says,

“The coming of the lawless one will be in accordance with the work of Satan displayed in all kinds of counterfeit miracles, signs and wonders and in every sort of evil that deceives those who are perishing (v 9, 10).”

I suspect many Christians living in the dark time right before the Lord Jesus blows the lawless one away with the splendor of His coming (v 8) will wonder if Christianity is losing its grip.  Like the casualties on Omaha Beach, the tragic consequences of evil will liter the lives and lanes of our world.  From all appearances, it will look like wickedness is winning the war.

Yet like Normandy, the Lord in His Heaven sees the Big Picture.  We perceive only what is happening in our little corner, yet Christ sees it all.  He sees the whole world and the span of time.

Unlike the invasion of Normandy, however, we know the final outcome.  The Allies didn’t. They were taking a huge risk.  They didn’t know if they would be successful.  In fact, none of their goals for June 6, 1944 were achieved that first day.  They had hoped to secure the major town of Caen the first day but that didn’t happen until six weeks later. Imagine what went through Generals Eisenhower and Montgomery’s minds during Operation Overload – is this going to work? 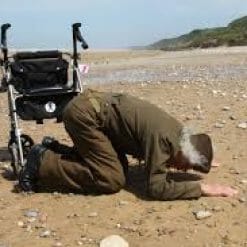 Even the layperson in the church pew doesn’t have to wonder. We have full assurance that Christ will be victorious! Read the entire book of 2 Thessalonians.  Then read Revelations which reveals the Big Picture. Christ will have the final say.  He will win this war against evil.  We don’t know when or how long but it will be won! Our job? Paul tells us:

“So then, brothers, stand firm and hold to the teachings we passed on to you.” 2 Thessalonians 2:15

When you read the reports about corruption, when you hear about horrible suffering, when you fear the violence in the street or you wonder how your faith will be attacked, don’t give in.  Hang in there. Stay obedient.  Live the holy life God has called you to live. Be like that officer on D-Day who led his troops up a hill toward the enemy fire.  Grit your teeth, dig in your heels and don’t let the evil of our world defeat or discourage you.

Because Christ is gonna win.  And He has you covered.

“May our Lord Jesus Christ himself and God our Father, who loves us and by His grace give us eternal encouragement and good hope, encourage your hearts and strengthen you in every good deed and word.” 2 Thessalonians 2:16, 17.