WITH FRESH EYES: Winner of the ECPA Christian Book Award and the Selah Award. Get your copy here.
Home / Grace on Parade / Shelba Shelton Nivens: Journey of Perseverance

Shelba is another client of my literary agent, Linda Glaz. We got to celebrate with Shelba this spring when her first novel, The Mistaken Heiress, (Heartsong Presents) went into print on April 1st. 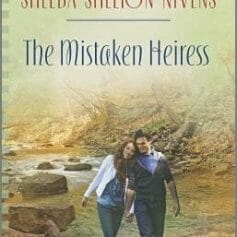 It’s a thrill every time an author hears that magic word, “Contract.” Shelba has waited a long time to hear that word. You see, Shelba is 76 years old. Moreover, Shelba has faced and continues to face debilitating health issues, including constant pain.

Here is Shelba Niven’s story in her own words:

I’ve always loved words—the way A,B,Cs are used to make words; the way words that sound alike make rhymes; the way words make stories.… But it wasn’t until second grade that the writing “bug” bit me.

“I want you to write a play pretending you are some object,” Our teacher Mrs. Lucas told the class

I thought about reading in our science book that liquid expands when it freezes, and I remembered hearing my city-aunt talk about a “milk man” delivering milk to her door in glass bottles. Putting these two intriguing bits of information together, I pretended I was a glass bottle full of milk left on a porch, on a cold wintery morning, where I froze, burst and ran all over the place.

When my play was chosen for the class to act out, I knew I was going to be a writer some day.

Throughout my school years, I wrote stories, plays, song lyrics, poems, edited the school newspaper, and dreamed of one day settling down in the country with a wonderful country boy to raise kids and write books—like Jo March in Little Women and Jo’s Boys.

My books, like Jo’s, would be good, clean stories about families, and men and women God brought together to love each other forever.

My “wonderful country boy” and I were married a few months after I finished high school. He joined the army to get his obligation to Uncle Sam behind him, and I went to work for the Birmingham News. I was writing paychecks for writers instead of writing for the paper. But I thought, If I get my foot in the door I’ll go to school at night, study journalism and move over to Editorial.

Before I could implement my plan, Ken was sent to Japan for two years and I learned I was pregnant. While Ken was away, my writing consisted mostly of a letter every night—and occasional love poems. After he came home, we rented an apartment in the city for a year then bought a mobile home and moved to the country, where Ken and I became youth leaders in the church where he grew up.

We loved working with the young people. But writing things for youth programs stirred up that old writing bug and I began to sense God speaking to me about a writing ministry.

“But, Lord, I already have a ministry to people I can see,” I argued. “If I just sit home and write how do I know anybody will ever even see it?”

When I became ill and put to bed where I was no longer able to work with the youth, I stopped arguing. If God wanted me to write, I didn’t have to know if anybody read it. God would do with it whatever He wanted to do. So, after I was able, I kept a pad and pen under my pillow and wrote all hours of the day and night. When I was allowed to be up, I borrowed an old mechanical typewriter, typed up things I wrote in bed and sent them to editors whose names I found in magazines.

Right away, my work began appearing in family and religious periodicals, and for several years I free-lanced regularly for these. I also worked for several years as a writer/photographer for our county newspaper, and am a community columnist today. Although I no longer worked regularly with the youth after my illness, I was asked to write a play for them—which started almost forty years as Leaders of church drama Ministry for Ken and me.

Meanwhile, I also worked on novels. A lot of editors had good things to say about them, but nobody accepted them for publication—until last summer.

Now, at the age of 76, my first romance novel has just been published.

Hooray! As we tell each other on Linda’s clint listserv group every time someone has good news, we’re doing the happy dance with you, Shelba!

“Now Faith is being sure of what we hope and certain of what we do not see.”

Sometimes writing feels like you are dropping words into a dark hole, that you are riding in a train hurtling ever forward in a tunnel with no light in view. Shelba says it was her faith in God and in the gift she knew came from Him that helped her pursue her dream of publication. Talk about being certain of something we cannot see!

The publication of Shelba’s book inspires me to keep cultivating the gift God has given me, to keep believing that I am where He wants me to be and to put the feet of perseverance on my faith.

What area of your life do you need perseverance? How can we pray for you?

Here’s a teaser about The Mistaken Heiress by Shelba Shelton Nivens:

Kate plans to start a landscaping business on the property her beloved grandfather promised would be hers. So when she encounters a mysterious stranger who insists he owns her inheritance fair and square, she can’t let it go without a fight. No matter how attractive he is.

Steve Adams is taken with the beautiful setting, a perfect place to build a home for troubled kids. But he didn’t expect a flame-haired beauty to claim the place, or his affections. When Kate decides to give up her claim for the kids, can Steve convince her that everything he has is hers, now and forever?