WITH FRESH EYES: Winner of the ECPA Christian Book Award and the Selah Award. Get your copy here.
Home / Grace on Parade / Fighting Forward: 5 Steps Toward Moving Beyond Failure 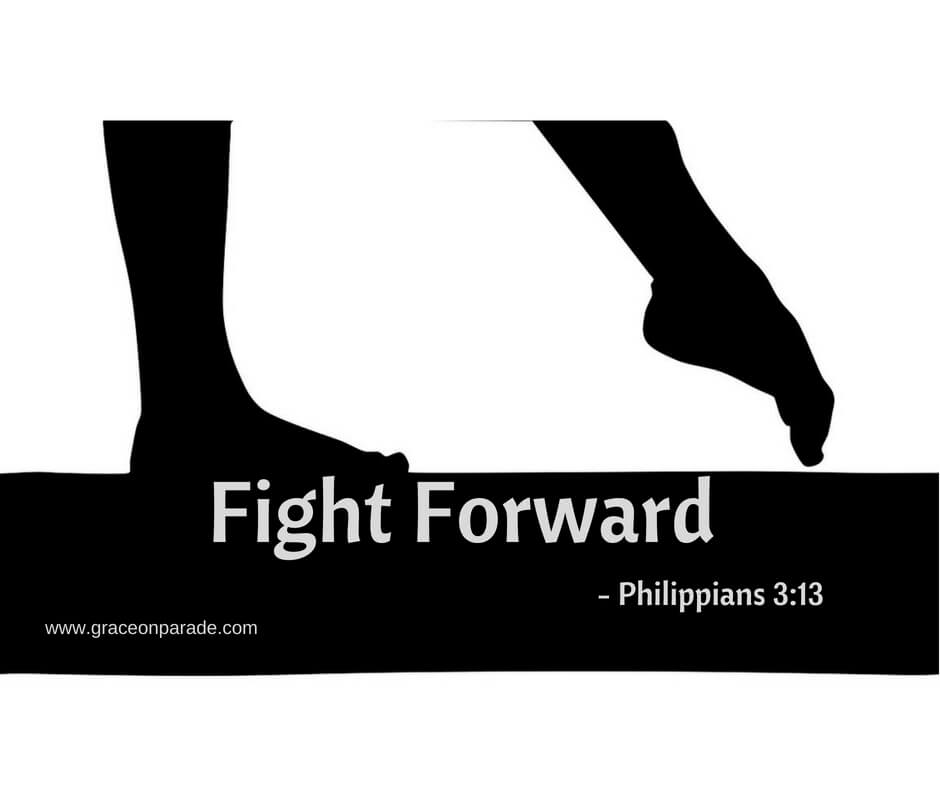 Have you learned the art of fighting forward?

My daughter recently attended a 9-week Army course, which operated under the premise that to be a great leader, you must learn to cope in situations outside your comfort zone.  In addition to the necessary activities, my daughter further challenged her limits by signing up for a combatives course designed to teach the participants how to not only deter an assailant, but if necessary engage and finish the fight.  Being half the size of many of her classmates, she often found herself at the mercy of her opponent.

Listening to my daughter’s fight against discouragement brought back memories of my own experience of being pushed beyond my limits.

Special education was just getting a foothold when I entered high school, but prejudice against the handicapped still ran rampant, especially in a physical education department that championed physical excellence, not physical limitations. My mother agreed with the school – a visually impaired child had no business being in contact sports like softball. That wasn’t good enough for the department head. She wanted me out of P.E. But I needed P.E. to graduate. Too bad, was the prevailing attitude.

I sat out of P.E. for two quarters because the only available electives were the contact sports. The final quarter of my junior year, a gymnastics class was on the roster and my mother and the P.E. head reluctantly compromised to let me in the class.

I was petrified. I couldn’t see how to make the moves, my lack of depth perception made me uncoordinated, and my self-confidence was cracked. Every time I entered the class, I knew I was going to fail. Hopefully, I could keep the failures on the smaller side. I knew I would get no encouragement from the male teacher. A strict, sports obsessed man, he had no use for those of us who couldn’t deliver, encouraging only those he thought were prime candidates for the gymnastics team.

At my daughter’s midterm evaluation her instructor gave her an unexpected compliment: “I realize that this course has been challenging, but you have kept fighting forward.” Putting a label on her actions helped her to keep going.

When she told me what her instructor said, I resonated with that term, “fighting forward.” That’s what I had to learn to do in that gymnastics class.  Usually an A+ student, I realized that unlike other classes, all I had to do was pass the class. I didn’t have to be good – I couldn’t be good — but I had to try. I had to show the teacher, the other students, my mother, and an unconvinced administration that I could survive and prevail despite my position at the bottom of the pecking order.

The day of the final exam came and I failed.

Or so I thought. I did the required balance beam routine, shaking so badly, everyone could see it. Twice I fell off the beam. Twice I got back on. I did my final dismount and hyperextended my leg, tearing my ankle muscles into a severe sprain. I collapsed on the mat to a collective gasp from my classmates. So bound and determined to finish, I rose to my feet and in spite of the pain, did the traditional salute with arms raised, then collapsed to the mat again.

Maybe the teacher wasn’t the hard-nosed monster I had made him out to be. Or maybe I had won more than I had lost. As the teacher helped me into a wheelchair for a ride to the nurse’s office, he said in front of the class, “Good job. You showed a lot of courage out there.”

Like my daughter, I learned the art of fighting forward

Learning to survive through perceived failure is one of the toughest lessons we will ever face in life. Yet struggle through the failure strengthens character muscles in ways that easy success could never accomplish. Success comes, to use a football metaphor, not in scoring a touchdown, but simply in the ability to gain yards toward the end goal.

How do you keep fighting forward?

Redefine success. Success comes in the small moments, in the progressive steps. If you are moving toward your goal, you are succeeding.

Reevaluate your goals. My goal was not to be the perfect gymnast. That was an impossible goal. My goal was to pass the class and prove to the P.E. department that I could complete the course. I did that – on one foot – but I did it. It’s easy to get caught up and entangled with what the world will see as the tangible result. What is your real goal? Is your goal to climb Mt Everest or to reach the top? Do I want to get a book published – something that is frankly out of my control – or do I want to write a book? Even if my goal is to bless others with the message of the book, I’ve so often found that I’m reaching that goal as I go through the process of writing.

Relinquish the past. Paul said in Philippians 3:13, “But one thing I do: Forgetting what is behind and straining toward what is ahead.” Both failures and successes in the past can restrain us from experiencing future success. Apply God’s attitude that His faithfulness is new every morning. (Lamentations 3:24). Approach every attempt as if a clean white board graces your wall.

Release your dreams. I didn’t say don’t have dreams. We need dreams and goals to give us something to shoot for. But we need to hold all dreams loosely and not allow our inability to reach those dreams to devastate or discourage us. When we die, every single one of us will leave things undone. Focus instead on what you have accomplished in the process of journeying toward your dreams.

Reflect on the inner man. True success comes not in what we do but who we are. Instructors recognized both my daughter and me for our character development and for our courage in fighting forward in spite of the odds. Soldiers who receive the award of a Purple Heart posthumously would probably protest the award. They didn’t succeed; they didn’t even stay alive. Their mission was not completed. But that’s not what they are being recognized for. They receive the award because they conquered fear. They overcame weakness. They contributed to the process of winning the battle.

Fighting forward is the refusal to give up, run away, or remain on the ground.

Fighting forward is getting back up even though you know to the marrow of your bones that you probably still won’t succeed at what you are attempting to do. You get up anyway because you know you aspire to goals higher than the obvious and dreams more unseen than the visible. The goal you can touch is merely a stepping stone to greatness.

Don’t give up. Keep fighting forward. Success comes through the process, not in the end result. You will be a winner just because you tried.

Previous Post: « Personal Safety: What’s A Christian To Do?
Next Post: Desert Bloom: God’s Promise To You »