WITH FRESH EYES: Winner of the ECPA Christian Book Award and the Selah Award. Get your copy here.
Home / Grace on Parade / In The Garden: God’s Meeting Place With His Beloved

Are you familiar with the hymn, In The Garden? What message does it hold for you? 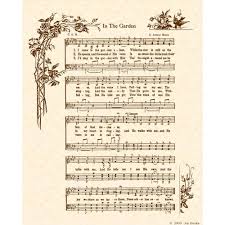 I never cared for the hymn, In The Garden, written by C. Austin Miles in 1912. It sounded so mushy and schlocky. I think it must be sung or played at 90% of funerals for folks over seventy. I sang it as a duet at my uncle’s funeral because it was one of his two favorite hymns.

What kind of substantial theology was there in this archaic poem anyway? What is it talking about? Which garden? Gethsemane? If so, boy howdy, did that writer have his Bible facts twisted! Jesus didn’t tell anyone to go anywhere, especially through a voice of woe. The best I could come up with was the author was referring to the Garden of Eden. It explores the beauty of walking and talking with God in the Garden. We’d rather stay there but with a voice of woe, God tells us our sin has prohibited us from the pleasure of His company. That sounds too dour to be a theme of a hymn.

The only twisted one was me. In just the last two weeks, I’ve discovered this hymn has a depth of theology only those who have traveled dark places can fully understand. I also got the too-smart-too-late idea to research what was in the author’s mind when he wrote it. Let me share with you what I’ve learned about this now beautiful, oh so poignant hymn.

Gardens: Places of Refuge and Solitude 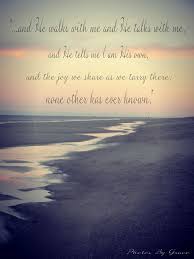 My first awakening came when I read the chapter “Come To the Garden” in the book What If God Wrote Your Bucket List? by Jay Payleitner. A long-time para-church worker with Prison Fellowship, the Josh McDowell Ministry and a freelance radio producer, Jay came across a scratchy recording during his work with Bible League International. A Chinese pastor told of the years he was imprisoned, tortured and confined at the bottom of a 15-foot cesspool filled with human waste. The pastor shared the song he sang while in that cesspool – In The Garden.

The joy in the pastor’s voice was unmistakable. He explained why. While he was there, the guards would leave him alone. The filthy pit became his private worship space. His garden. The private moment when he could spend time alone with His Lord – just him and God.

My brain finally connected with why In The Garden was one of Uncle Eldon’s favorite songs. He had sung the words to himself while he lay in a German prison hospital after he’d been shot in the head in the aftermath of the Battle of the Bulge. He shared much later in life how those words sustained him during a tough and scary time. That didn’t register in my brain until I read the verse Jay connected with the Chinese pastor’s experience.

“Let all who take refuge in you be glad; let them ever sing for joy.”

When Uncle Eldon had no one else, God was there. His prison bed became his garden spot shared only by His Lord.

Sometimes God has to get us away from what we know, do, and love in order to spend time with Him. Alone. When the rest of the world turns on us, beats us over the head, threatens to pull us apart bone from sinew, He is there. He is with us. He will walk with us and talk with us when no one else will.

The Garden of Miles’ Song 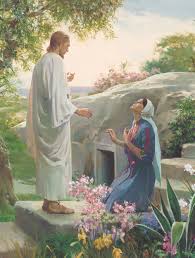 Okay, so the first question I should have asked years ago is the question I wish more of my readers would ask me – what motivated the author to pen those words? Not too many minutes on the Internet revealed the answer.

One dreary day, C. Austin Miles turned to his Bible. He did the “flip open and see what it says” method we’ve all used but we know in our hearts isn’t the best way to search for reassurance from God. In God’s mercy, He sometimes uses that method anyway to speak to His children. Miles’ Bible lay open, not at the story of the Garden of Gethsemane or the Garden of Eden like I had assumed. He had turned to John 20, the story of Mary Magdalene’s meeting with Jesus in the garden where Jesus’ tomb was located. Miles visualized what that meeting must have been like. The words to In The Garden flowed. That night, he wrote the tune. He said years later that he changed little of the song from the day he wrote it.

Now the song makes perfect sense to me. Look at the words. It’s a retelling of that meeting by the garden tomb. It’s an expression of Mary’s joy that the Lord who had already rescued her from so much had broken His own bonds of death. What a special, intimate moment. Woe had turned to joy.

Miles would write years later about Mary’s meeting with Jesus, “This is not an experience limited to a happening almost 2000 years ago but it is the daily companionship with the Savior that makes up the Christian’s daily walk.”

The Balance Between Go and Stay

That pesky phase in the third verse that ruined the song for me? 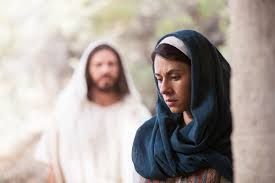 “I’d stay in the garden with Him
Though the night around me be falling;
But He bids me go—thru the voice of woe,
His voice to me is calling.

When something wonderful happens, we wish it would never end. Of course Mary wanted to linger. She had so much to ask, to share, to dance, to celebrate. She reached out to grab hold of Jesus. No, Jesus said. Now is not the time, Mary! Go! There’s work to be done. Go share the news with the others! Go! And she did.

A common mistake in understanding poetry is that we assume the rhyming words are connected thoughts. Not always and not in this case, I believe. “Through the voice of woe, His voice to me is calling” is a summary statement of the entire hymn-poem. At that moment, Jesus was not the one with the voice of woe. It was Mary! She was the one who had been weeping at the entrance of the tomb. It was Jesus who called out to her in recognition. “Mary!”

When Jesus spoke her name, Mary Magdalene’s worst moment turned into her best moment. That’s what Jesus wants to do for me, for you. In our worst moments—whether during persecution, imprisonment, unfair treatment at the hands of evil men, unbearable pain, or good-byes to a dear one on earth—Jesus wants to call me by name, walk and talk with me, and turn the moment into a treasured time spent with Him. There are times to go and face the challenges of the world. There are times to draw back and share intimacy with our Savior, to find solace in Him and Him alone.

“And the joy we share as we tarry there/none other has ever known.”