WITH FRESH EYES: Winner of the ECPA Christian Book Award and the Selah Award. Get your copy here.
Home / Grace on Parade / God’s Grace In Flight – Kate Breslin 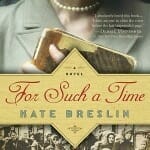 I’m so excited for fellow writer Kate Breslin .  Her first novel, For Such A Time, debuts this month. Already, this book has received acclaim as Romantic Times features the book as a Top Pick. (see review).  The powerful story of courage and sacrifice features a young, bitter, Jewess-in-hiding who must choose to send her own people to Auschwitz in order to survive, or put her trust in God by giving her heart to the man responsible for their doom.

Today, Kate shares her personal story of when the gospel message became real for her.

It was a warm July afternoon when I boarded a plane from Seattle to Green Bay, where my mom’s side of the family was planning a reunion and a 70th birthday celebration for my grandmother. Already it had been an emotional summer for me; I’d lost someone precious, a good friend and co-worker who perished unexpectedly in a climbing accident just weeks before. I still found myself grappling with the loss as I sat on that plane; that I had let my Christian faith lapse years before wasn’t affording me any kind of comfort, either.

I’d come close to returning to church after my brother died; then again when my father passed away. Yet each time, I went through the motions as I grieved and felt lost, but once I began to heal I returned to my own version of “Creation reality.”

This time, however, my friend’s death really jarred me. I felt like a sleepwalker shaken awake, that horrible, confused feeling that keeps one off balance.

Just as I had with my brother and father, I longed for reassurance that there was a heaven and that my loved ones were there, safely tucked away. Still, I couldn’t seem to wrap my head around the concept of faith anymore. What did it mean, anyway…and why didn’t I have it? I’d gone so far as to purchase a Bible and brought it with me on the plane. I’d started reading it only a few weeks before, and hoped to finish it over the next several months, something I’d never done before. Perhaps the Scriptures would show me how to get my faith back. You know, make it stick this time.

The plane was still at the gate. As passengers continued to load, I opened my Bible and began to read. Maybe it was Matthew 4:18, the passage where Jesus met Peter and Andrew then James and John, and told them to “Come, follow me.” I asked myself: Was I just reading words on the page? What did having faith, burning faith—really feel like? These fishermen must have known; otherwise, they wouldn’t have walked away from their boats and nets to follow Christ, would they?

I kept on reading—passages about the treasures of heaven and a tree and its fruit. I skipped forward and read about the faith of the Centurion (Mt 8:5); a Roman soldier and veritable stranger to Christ, yet he believed Jesus would save his servant simply by telling Him.

By this time, the plane had taxied onto the runway. As I felt it begin to gather speed, I experienced my usual pang of anxiety before I let out a deep breath and let go of my fear, trusting that in seconds we would ascend into flight…

It was as if God suddenly opened my eyes. It dawned on me that I was willing to put my faith in the company that had built the plane, the pilot who flew it, even the ground crew who had performed the last maintenance on it; flawed human beings, all, yet I chose to believe we would become airborne within moments.

With God, however, I had continually expected assurances—proof that Jesus was His Son, that He’d performed those miracles, that there really was a heaven.

As I felt the slight G-forces that came with the plane’s swift acceleration skyward, I grasped the concept that faith was simply a matter of letting go—of my doubts and fears—and taking that incredible leap. I realized faith was a gift which had always been there for me, from the moment Jesus offered it from the Cross. I had only to reach for it. 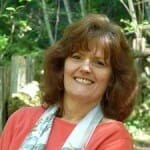 A Florida girl and former bookseller, Kate Breslin migrated to the Pacific Northwest where she lives with her husband and a spoiled cat named Coco. Kate has written travel articles, published award-winning poetry, and her first manuscript was an RWA Golden Heart finalist. FOR SUCH A TIME is her debut novel. Kate’s writing journey has been one of faith as well as success; after years spent writing novels aimed at the general romance market, she finally heeded God’s call to write stories of how His love brings two hearts together. When not plotting her next novel, she loves to read, take long nature walks in Washington’s many beautiful forests, and travel to new places. Please stop by and say hello at www.katebreslin.com.

MORE ABOUT “FOR SUCH A TIME”

In 1944, Hadassah Benjamin feels abandoned by God when she is saved from a firing squad only to be handed over to a new enemy. Pressed into service by SS-Kommandant Colonel Aric von Schmidt at the transit camp of Theresienstadt in Czechoslovakia, her Aryan-like looks allow her to hide behind the false identity of Stella Muller. However, to maintain her cover as von Schmidt’s secretary, she is forced to stand by as her own people are sent to Auschwitz.

Suspecting her employer is a man of hidden depths, Stella appeals to him on behalf of those in the camp. Aric’s indulgence gives her hope even as she risks discovery with every attempt to help the prisoners. When her bravery brings her to the point of ultimate sacrifice, she faces an excruciating choice. God may have brought her to the camp for such a time as this, but how can she save her people when she cannot save herself?