WITH FRESH EYES: Winner of the ECPA Christian Book Award and the Selah Award. Get your copy here.
Home / Grace on Parade / The Son of God: Scenes From The Crucifixion

The movie, The Son of God, is a powerful rendering of the life, death, and resurrection of Christ. The crucifixion scene touched me in a way I didn’t expect or like. Here’s why: 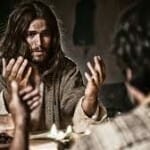 Every once in awhile, in the course of our lives, we turn a bend and glimpse another view of ourselves. Sometimes that fresh look is not always pleasant.

The other day, when I went to see the movie, “The Son of God,” that hidden part of me knocked on the door of my stomach to remind me it was still there. I’ve never cared for what I term “scawy movies.” I can’t handle the blood. I don’t like the violence. I internalize the tension. I feel the pain. Too much of a middle aged lady to run, I find creative ways to avoid so I don’t embarrass myself or my family. But they still know. Mommy has a tender heart – and a tender tummy.

Even as a child, I hid in the back of our family station wagon during Swiss Family Robinson. I was the only one who felt sorry for the villains in Home Alone. I wept hysterically at a scene in  Ghandi when British soldiers opened fire on innocent women and children in a closed courtyard. I gritted my teeth through Saving Private Ryan determined to catch the ambiance of horror for a novel I was writing and equally determined to prove to my husband that I could get through it. The one time I was required to be at a church event that showed The Passion, I covertly stood in the back of the room, thankful for my poor vision that usually insists I sit at the front. There was one problem. Nothing is wrong with my hearing. With every blow of the hammer driving the nails into Jesus’ – er, the actor’s – flesh, I wanted to scream.

I didn’t think The Son of God would be as violent as The Passion. The first scene splattered that theory in my face. But the movie soon settled into the narrative of Jesus’ ministry and I sat enthralled at the visual imagery, the Word in Picture, and the careful selection of scenes from the timeless story used to prove that Jesus was indeed The Son of God. See my previous blog. That was worth it all.

From the moment Peter cut off the ear of the High Priest’s servant, I buried my head in my husband’s shoulder. I kept trying to tough it out, to swallow the repulsion. I didn’t want to leave because my exit might be a distraction to someone who was living the Gospel message for the first time. Waves of weariness washed over me as I constantly fought the urge to weep, fearing once I started, my out-of-control sobs would alarm our friends and disturb other viewers.

I felt like a coward and a wimp. What kind of follower of Christ was I if I couldn’t even stand to watch the suffering of my Savior? What would my friends think of me if I let flow the tearful anguish threatening to burst from my soul?

When my stomach physically lurched at the sight of Jesus hanging on the cross, I knew my personal battle was lost. A recent experience in my husband’s doctor’s office when I almost passed out at the sound of the doctor suctioning my husband’s nose taught me that it is not wise to ignore those initial physical warning signs. If I didn’t leave the theater immediately, I really would be embarrassed.

I missed the best part. 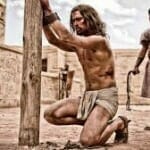 I hate being this way. I hate being uber-sensitive both in mind and body. Good grief, I can’t even watch my girls in a roller coaster without having to turn away. I had the mistaken idea that when a mother gave birth to her first child, the gag reflex washed away with the afterbirth.  My baby’s first bout with illness dispelled that theory.

But that is the way I am.

I’ll never be free of a squeamish stomach this side of Glory. I’ve fought it for over fifty years and I still turn my head at the sight of blood and the sound of an anguished cry. The best I can do is manage. At times I can rise above it to get through the crisis at the time, only to turn into a pile of jelly after it’s all over. Raising children has taught me to do what needs to be done and shelve the emotions – at least for the more public moments.

I know my limits, my breaking point. I challenge myself each time to go a little further, to control the revulsion, and to hide in bathroom stalls when the emotions overwhelm me like a flash flood.

Friends have told me that there is a plus side to my super-sensitivity. My hyper-awareness and over-active imagionator  supposedly makes me a good writer. Ugh! To quote a character from The Phantom of The Opera, the price we pay for our art.

Maybe an emotional reaction to pain, suffering and evil isn’t a bad thing. After all, Jesus cried at the tomb of Lazarus. Contrary to what The Son of God portrayed, the Bible records that the women stood far off from the cross. Maybe the suffering of their Lord made their stomachs lurch too. As one friend told me after we left the movie Gandhi, “Perhaps it’s not you who has the problem. Perhaps the rest of us have become desensitized and hardened to the world’s pain.”

I’ve learned that I’m not alone. Each person has their hidden weakness, their personal struggle, their own hidden revulsion. Some people are afraid of heights, others of public speaking. Some don’t like confrontation of any kind; others are terrified to step foot in an airplane. I don’t do “scawy movies.”

I take heart in this one fact – that if God ever called me to help someone in an accident, stand up to an evil person, or proclaim my faith to the business end of a semi-automatic, I could do it, knowing beyond a scrap of a doubt that it was God working in me. I would be utterly dependent on Him to get me through because I know me and I know it’s not there. Like Psalm 23 promises, whenever I do have to face the valley of the shadow of death where potential dangers lurk at every step, I won’t need to fear because He will be with me.

So maybe my Lord isn’t displeased that I walked out on the scene of His suffering. Maybe it shows that I really do hurt that He hurt, and I understand literally to the depths of my gut the magnitude of His love for me.

Yes, my flight from the movie theater denied me the privilege of seeing the end – which I understand was totally awesome. When the movie comes out on Netflex, I plan to try again, remote in hand with two fingers poised over the mute and fast forward buttons so I can see the glorious conclusion.

How do you respond to a portrayal of the suffering of the Son of God?