WITH FRESH EYES: Winner of the ECPA Christian Book Award and the Selah Award. Get your copy here.
Home / Grace on Parade / Friday’s Feature: Laurel

Oh my! I want to read Laurel. 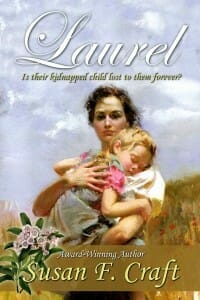 Starting today, I’d like to turn my Friday post into “Friday’s Feature” where I’ll tell you about a book I’m reading or about one I want to read. I’m hoping to share a variety of both fiction and non-fiction books, all that deal somehow with God’s grace reflected through us.

Today, my friend and fellow client of Hartline Literary Agent Linda Glaz, is launching her newest romantic suspense, Laurel. As busy as she is in launching her new book, I snagged Susan to answer a few questions for me about Laurel so I could share this delightful sounding book with you. Susan F. Craft, who writes historical romantic suspense, recently retired after a 41-year career as a communications director, editor, and proofreader. Susan wrote A Writer’s Guide to Horses, for the Long Riders’ Guild Academic Foundation, to assist authors who “want to get it right about horses in their works.” The Guide is at www.lrgaf.org. Forty-five years ago, she married her high school sweetheart, and they have two adult children, one granddaughter, and a granddog. An admitted history nerd, she enjoys painting, singing, listening to music, and sitting on her porch watching the rabbits and geese eat her daylilies.

What is the setting and time frame of Laurel?

Laurel begins in May 1783 at the vineyard of Lilyan and Nicholas Xanthakos in the Blue Ridge Mountains, but their journey takes them to Charleston, South Carolina, and to the North Carolina Outer Banks.

Tell us a little bit about the main character in Laurel.

Lilyan Xanthakos is an ordinary Christian person to whom some extraordinary things happen. Though she would disagree with me, I think she is brave because she does what has to be done, despite being afraid. She has a strong sense of family and would do anything to protect them. She is a giving, caring, and generous person. 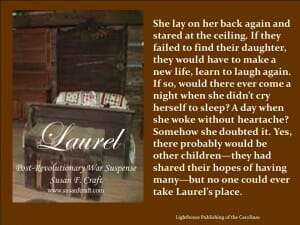 What gave you the idea to write Laurel?

Lilyan and her husband Nicholas meet and marry in my novel, The Chamomile, the prequel to Laurel. People who read The Chamomile loved the couple and their adventures during the Revolutionary War so much they begged me to continue their story.

I wrote both books as well as Cassia, the third in the trilogy, as “stand-alones,” which means you can reach each book without having read the others.

Grace can be defined as undeserved generosity. How do your characters experience God’s grace?

Even in the midst of one of the worst adversities possible, the kidnapping of their child, Lilyan and Nicholas not only cling to each other, they call upon the Lord for calm hearts and wisdom. Those prayers are answered during their darkest hours of discouragement preventing them from succumbing to despair. Throughout their travails, people come alongside them just at the right moments speaking words of encouragement, helping them in their search, and providing for their needs.

How do they express grace and mercy to each other?

Even in the depths of distress, as Lilyan is when imprisoned for the death of a British officer, she tends to the needs of other prisoners, physically and spiritually. For example, while in the dungeon awaiting a grand jury hearing she meets Fianna, a young, very pregnant woman, whose sentence of hanging has been postponed until the birth of her child. Fianna approaches Lilyan and asks, “You’re a Christian, aren’t you?”

“I’ve seen you reading your Bible. But more than that I’ve watched how you treat other people. You’re a true gentle woman.” She cocked her head. “I can’t help but wonder. If I’d met someone like you, when I was young. You know, before I took a wrong turn. Would things have been different?”

As their conversation continues, Fianna explains that the only times she was ever in church was to get close to people in the pews to pick their pockets.

“Many a person left services lighter in their pocket because of me. I’ve done some awful things. I bet you never done anything bad in your life.”

Lilyan locked eyes with Fianna. “I killed someone.”

“Yes. I heard you talking. A British officer. But you did it to save your friend.”

“Nonetheless, I took his life. Something I begged God’s forgiveness for.”

“And you believe that He forgave you?”

“With all my heart.”

Fianna shrugged and held out her hands palms up. “Do you think God could ever forgive me?”

A big breath left Lilyan’s body, and she shared a smile with Mildred, whose eyes swam with tears.

Lilyan clasped Fianna’s hands. “I think God forgave you the moment you said those words.”

Tell us about yourself. Besides writing, what gifts has God given you in order to serve Him? 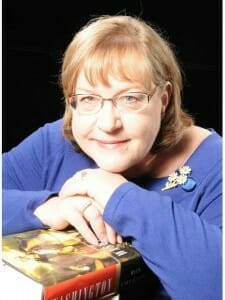 God gifted me with a singing voice and a longing to join my voice with others in fellowship and worship. I sang in church choirs from the time I was eight until last year when at 66 I retired from singing fulltime. I can’t give it up altogether, though, and plan to sing Easter and Christmas cantatas. Nothing equals the feeling when you’re singing alongside others worshipping and praising the Lord. The joy is boundless.

Tell us about a time God has shown his mercy to you or used others to “pass grace forward” to you?

When my father lay dying from lung cancer in the hospital, the staff continued intubating his lungs, drawing away the excess fluids—prolonging the inevitable, some said. My father, who was on morphine and unable to communicate with us, had such violent reactions to the procedure and struggled so hard against it, I knew he didn’t want it done anymore. Overwhelmed by his obvious distress, I sought refuge outside his hospital room door. The hallway was tile, and I’ll never forget the coolness against my forehead as I slumped against the wall and prayed out my needs to the Lord. What was I to do? The moment I asked the question, a man, an orderly dressed in a white uniform, tapped me on the shoulder and said, “You know, you can refuse the treatment.” I turned to speak to him, but he had already walked away. After that, I spoke with the doctors, checked with my father, though he couldn’t respond, and we stopped the treatments. The change in my father was amazing. He became calm, the tension left his face, and he seemed to drift off into sleep. He passed away about four hours later. Did God bring that person to me? Yes, I believe it with all my heart.

But they that wait upon the Lord shall renew their strength; Isaiah 40:31

Doesn’t Laurel sound wonderful? Wait till you read the back cover copy that gives you the big picture of what Laurel is about!

“Desperate to rescue their kidnapped daughter, Lilyan and Nicholas Xanthakos trek two hundred miles through South Carolina mountains and backcountry wilderness, fighting outlaws, hunger, sleeplessness, and despair. When the trail grows cold, the couple battles guilt and personal shame; Lilyan for letting Laurel out of her sight, and Nicholas for failing to keep his family safe.

They track Laurel to the port of Charleston as post-Revolutionary War passions reach fever pitch. There, Lilyan, a former patriot spy, is charged for the murder of a British officer. She is thrown into the Exchange Building dungeon and chained alongside prostitutes, thieves, and murderers. Separated from her husband, she digs deep inside to re-ignite the courage and faith that helped her survive the war. Determined to free his wife at any cost, Nicholas finds himself forced back into a life of violence he thought he’d left behind.

Following a rumor that Laurel may be aboard a freighter bound for Baltimore, Lilyan and Nicholas secure passage on a departing schooner, but two days into the voyage, a storm blows their ship aground on Diamond Shoals. As the ship founders, both are swept overboard.

Will their love for each other and their faith sustain them as they await word of their missing child? Or is Laurel lost to them forever?”

So Susan, how can we get a copy of Laurel?

Laurel can be purchased through Amazon, the print and Kindle versions, and from my publisher.

Previous Post: « How To Be Perfect At Being Perfect
Next Post: U.S. Postal Service Woes: God Is Still Amazing »