WITH FRESH EYES: Winner of the ECPA Christian Book Award and the Selah Award. Get your copy here.
Home / Grace on Parade / The Futility of Christian Persecution 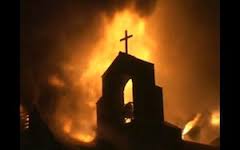 The Western World has been horrified by the recent increase of Islamic persecution against Christians. Yet if Muslim radicals bothered to read New Testament history and observe what is happening under their noses, they would discover that persecution doesn’t stop the spread of Christianity. In fact, it emboldens believers to stand strong, work harder, and trust an unstoppable God even more. It’s a fact that can encourage those of us who live in liberty and embolden us to pray even more urgently for those suffering for the cause of Christ.

My husband and I have two precious friends we have known since Bible College. If you don’t mind, I’ll protect them and not mention their names or country of origin. Suffice it to say they live in one of those countries where Christians are losing their heads because of their faith in Christ.

Until recently, most of this couple’s personal opposition came from other Christians. Once part of a mainline denomination, the husband realized his need to adhere to only the Scriptures. This didn’t sit well with national leaders who ultimately asked him to leave his pulpit. God used this expulsion to explode their ministry for now they are free to direct a Bible training center, speak at other churches and plant new churches. In their current ministry, they encourage Christians to lay aside denominational traditions and follow the New Testament pattern for salvation and church identity. A movement similar to the American Restoration Movement in the early 1800’s has swept through this country. One entire denomination changed their stance and committed themselves to follow only the Bible.

When we ask about the Islamic persecution, our friends wave aside our concern. “Oh once in a while, I get called to the police station, questioned, roughed up, and let go. No big deal,” the husband says. No big deal?

In their last post to us, they described one area of their country as being very resistant to the Gospel that hardly accepts evangelism. The Muslim radicals in their words, “are giving us a bad headache.” But, they add, “We don’t give up.”

This is their idea of not giving up. They had planned a Kid’s Festival and were expecting 500 children to attend. 500 children! That’s in a country that barely tolerates Christianity and where people are being beheaded for their faith. That particular day, even the forces of nature seemed to be against them. They woke up to a rare for that part of the world gale force wind of 55 miles per hour. So they gathered their workers together for a prayer meeting before the event started, asking God to “rebuke the winds” and give them a reasonable day of weather.

The wife bemoaned that they didn’t have the crowd of kids they expected, but at least 400 children heard the gospel message and experienced the love of Jesus. 400? Our youth minister would be ecstatic with 100! 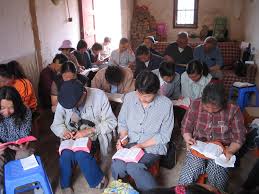 Then they described the work of a bible student who established a home church in a very poor village in another part of their country:

This is the third church our friends have helped plant since January, 2014. Their ministry also reaches into a neighboring country where the situation is very unstable and opposition comes from several directions. Yet our friends keep moving forward, always sharing the gospel, always reaching. They are planning a major teaching session late in 2015 for the Christian leaders in this country and are confidently proceeding with their plans in spite of the threat for Islamic terroists and tribal leaders.

Well, if you were certain you had the ultimate and simple cure for a terminal illness that was taking lives by the millions, wouldn’t you want to tell everyone about it?

If you were certain you had the cure for a terminal disease, wouldn’t you want to tell everyone?

Please pray for this dedicated couple. Their stated prayer requests range from safety for believers to two new copy machines so they can continue their work.

If you need names to record in your prayer journal, call them Sam and Matilda. God knows, that’s good enough. In fact, He has their names engraved in the palm of His hand and on some white stones He has sequestered in the realms of Heaven.

Meanwhile, the work goes on. They don’t give up.  Neither should we.  Because it’s worth it.